TYPO Berlin 2010 is Europe’s largest design conference, writes Robin Richmond, with 1500 delegates from eleven countries attending. Proceedings begin a little after 2pm on Thursday, when Erik Spiekermann (below) steps in for the original keynote speaker, Peter Kruse (unable to attend because of illness).

It is also Erik’s fourteenth TYPO as speaker and moderator. Over the next three days another 58 speakers are kept to order by six facilitators over the four platforms, sometimes addressing this year's main conference theme ‘Passion’, but mostly choosing not to. 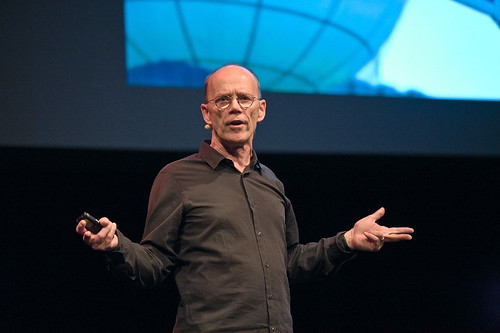 Last year’s Eye blogs, by long time TYPO contributor Jan Middendorp, raised a healthy debate about the value of the event (see Day 1, Day 2 & Day 3). As this year’s conference is a sell-out, with roughly 50 per cent of delegates returning each year, it is safe to assume that demand outstrips the concerns. I am however left to wonder what defines value at a conference like this? Is value diminished by a poor presentation or content that doesn’t interest the individual? I’m personally horrified by the platform given to crowd-sourcing design businesses (see Eye 74) but then the point of a forum like this to investigate and understand other perspectives and the changing landscape of the industry. I’m reminded of the maxim that you should keep your friends close and your enemies closer still.

In general, portfolio presentations are met with polite yet neutral applause. Where laptops were prominent in previous years, delegates hold iPhones and DV Cams in the air to record presentations and tweet. From the back, it’s like being at rock concert. The official TYPO Twitter stream ‘#typo10’ provides an interesting dimension and another conference channel. Of course the output polarises the audience. One poster retrospectively tweets ‘Postmodernism is getting old, along with its protagonists’ while another retorts that ‘Erik's presentation was as usual spontaneous, freeform, interesting and entertaining’. David Carson (above) is introduced as the ‘Godfather of Grunge’ and is warmly welcomed as he begins his presentation. Several nude slides of his girlfriend later and the audience’s exasperation begins to show, with tweets suggesting that he ‘was okay for fifteen minutes and now he’s wondering aimlessly’ and the harsher ‘the time of my old idol David Carson is genuinely past. Should not really hold more lectures’. Some people walk out, but given that the hall was packed for his presentation, the dynamic isn’t much different to other talks. At least Carson starts off as the darling of the audience. I miss the Studio Dumbar presentation, but if Twitter is the only vehicle for assessment it seems that the audience was unimpressed, ‘(the) presentation is like an adolescent with art academy ambitions. Unbearable.’ Meanwhile another delegate saw it as ‘just pretentious’. TYPO has evolved over the years and the programme includes portfolio shows, the more personal musings and scrapbook presentations of established conference veterans, contemporary graphic design, at least two variations on how to ‘establish yourself online’, pitches for and against crowd-sourcing, design planning, strategy and research. Given speaker list inclusions like Julian Smith (above), we may well see less and less typographic content at future TYPOs, with increasing emphasis on social media and general design and communication. Feedback to many of the presentations is enthusiastic. Jonathan Barnbrook, Jan Chipchase, Erik Kessels, Eike Konig, Joachim Sauter (below) and Carlos Segura are well received. And despite the Twitter feedback, I suspect David Carson has sold a batch of books from the event.