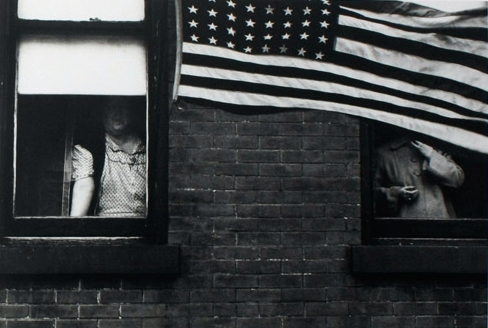 Had Robert Frank never opened another shutter after 1956, his reputation would be secure on the basis of The Americans. The Swiss photographer visited nearly every state in the Union, and his observations show the keen eye of a natural outsider, combined with the unnerving intimacy of an attentive suitor. He seems to get under the skin of every place he visits, but you also know he’s unlikely to settle anywhere. There are no chapters, just a flowing stream of 83 pictures, framed by minimal credits at the back and Jack Kerouac’s breathless and exhilarating introduction: ‘Anybody doesnt like these pitchers dont like potry, see?’

Certain subjects and shapes recur. Frank’s application for the Guggenheim fellowship that funded his trip contained a list that included ‘a supermarket, a highway … advertising, neon lights … gas tanks and post offices and backyards.’ Yet the final book has no big theme other than the sprawling bigness of America itself. Iconic images of its vast spaces are so familiar, from movies, from earlier photographers, from paintings of the Wild West, but Frank swept them into a questioning, picaresque narrative that encapsulates a moment, more than 50 years ago, before science and technology transformed our inner and outer landscapes.

The book has a curious publishing history. No US publisher would take the book at the time, so it was first published as Les Américains (Delpire, 1958) accompanied by texts about American social and political history and a cartoon cover – part of a series that would cover other nationalities (Germans, Italians, etc.). This reissue follows the format of the first English-language version (Grove Press) of 1959. Some later editions were licensed – without Frank’s control – in larger sizes. There is also a potentially controversial ‘director’s cut’ (remembering that Frank is equally renowned as a cult film director) aspect to it, too. According to Steidl, ‘Frank was involved in every step of the book’s design and production.’ Two images (‘Metropolitan Life Insurance Building’ and ‘Assembly Line – Detroit’) are slightly different photographs of the same subject. Equally, Frank has revised the crops used in earlier editions opting to show many of his pensioners, newlyweds, cars and roads full frame. Some images, such as the Newburgh motorcyclist and the New York cowboy, are as stylishly timeless as Bert Stern’s Jazz on a Summer’s Day; others tell us more about the journey than the destination: cars, gas stations, the empty open road in ‘U.S. 285, New Mexico’, and the beautifully desolate three crosses marking the scene of a highway accident in Idaho.

Frank is consistently good with people: solitary figures, couples, private moments in public places. On its own, the expression in the white baby’s face in ‘Charleston, South Carolina’, is funny and / or cute, but the thoughtful expression of the child’s black carer gives the picture a depth and resonance that continues long after you’ve turned the page. Politics, race, work, leisure, sex, love, death and despair – it’s all here, but handled with the lightest touch, to make this photo book an ongoing pleasure that resonates from one century to another.