Greetings from Darktown: An Illustrator’s Miscellany 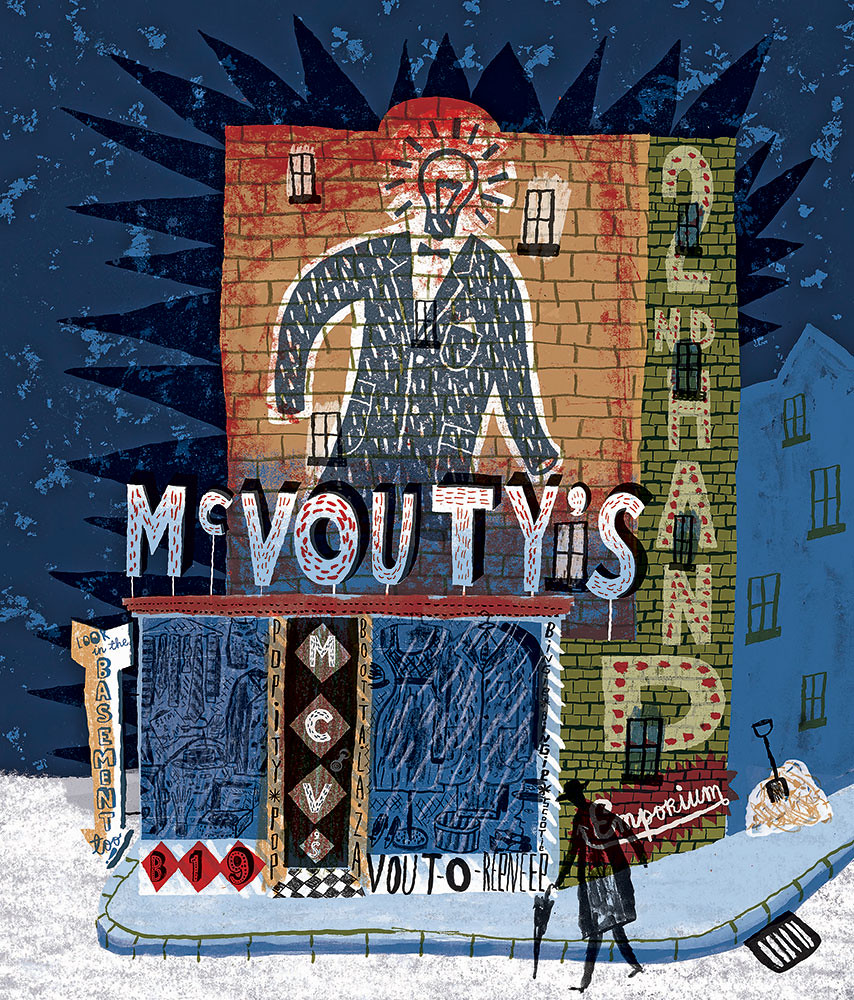 Do you know of the calypso singer Mighty Sparrow? Or the jazz singer Slim Gaillard, inventor of his own language, ‘Vout’? Or country music’s Carter Family and Hank Williams? Don’t worry if you don’t, you’ll get a fine grounding in their work – and in some cases, their back stories – from Jonny Hannah’s wonderful and eccentric commentary on his career in this aptly titled Miscellany. From Darktown, via Paris in the Springtime, aboard Rocket Man’s spaceship, it’s all here – held together by sheer force of personality, which is fascinating, given Hannah’s own rather shy and gentle nature.

I first caught a glimpse of Darktown’s imaginary cityscape when Hannah – then a young RCA graduate – sent me a set of hand-printed pamphlets. They illustrated folk and country songs in black-and-white line on coloured card. There was a vigour to the design, the type was wild and free, and you sensed a style being born, although I would never have predicted such a glorious flowering as this. The hard work of finding a niche at the Royal College of Art had led him, as Peter Chrisp writes, to follow the advice Peter Blake gave Ian Dury in 1961 at the Walthamstow School of Art: ‘Paint the things that you like, or that you are interested in.’ All the book’s contributing writers take delight in Hannah’s abidance by that dictum.

So Hannah set about celebrating hillbillies and hepcats, tin toys and old whalers, all in an unfettered and vivid style that bleeds over spreads and hits you right between the eyes. Nicola Bailey’s design lets it all breathe. It’s just organised enough, divided into thematic chapters, but not hemmed in or cramped. And the book captures the fizzing totality of Hannah’s work in an engaging, organic way.

Spread showing the lyrics to Charles Trenet’s ‘La Mer’ painted on a T-shirt-shaped signboard advertising McVouty’s Emporium.
Top: Exterior of McVouty’s, a fictitious shop which has been source and subject of much of Jonny Hannah’s art. 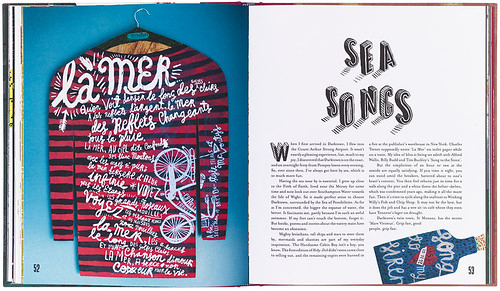 So, with a tip of the hat to self-taught outsider artists like Henry Darger and Ralph Fasanella, the reader is taken on a tour of Hannah’s obsessions, starting with the fictional Darktown. An idealised high street of traders – Ole Whitman’s Print Shop (printer of chapbooks and pamphlets), Mr Emmett Miller’s Unquiet Grave Emporium (where Vivian Maier buys film for her camera), Hulot’s Hôtel de la Plage (for a great bowl of mussels) – is rooted in a Scottish childhood in Fife, transposed to a place where the ‘old, weird America’ meets the French seaside.

At one point, Hannah quotes Herman Melville: ‘Queequeg was a native of Kokovoko, an island far away to the West and South. It is not down on any map; true places never are.’ Hannah says: ‘I’ve always been fascinated by this paragraph, partly because it’s from one of the earlier chapters in Moby-Dick, so I have actually read it; but mainly because I still don’t know what it means. If true places are not on any maps, then where on earth are we all right now?’ In a nutshell – which opens up into a night-time carny show – you have the land that Hannah stakes out: a mythical world that has the South at its core – the South of King Cotton and hot jazz, of chewing tobacco and country songs. But it’s also the South of the South Sea Islands and southern swells, a fantasy of sea captains and whaling ships.

And there are detours, too, such as Ole Whitman’s Type Specimen Catalogue, inserted in the heart of the book – ‘When Good Type Turns Bad’, the cover exclaims, with ‘Typo’s Guaranteed!’ – detailing the many hand-drawn fonts that have come to life in Hannah’s drawings. There are his posters for the Museum of British Folklore; his wallpaper and fabrics for St. Jude’s; and his own Cakes & Ale Press, distributing bulletins from Darktown. Hannah paints, prints or carves like a man possessed, his materials covering the waterfront from driftwood to lino. You can easily picture him mixing gallon-drums of paint in Atticus Finch’s back yard in Maycomb County, Alabama.

If you’re familiar with the ingredients of Hannah’s vistas, this is a glorious book to wallow in. If not, it won’t take long to be seduced into a world where, as he puts it, ‘once you set off on this Lost Highway, there’s no turning back.’

Cover of Greetings from Darktown. 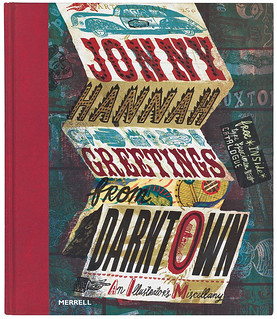