A tradition of departure

Graphic Design and Typography in the Netherlands: A View of Recent Work

The United States’ cultural institutions have much to learn from the Netherlands. This was one of the points made by a fresh and subtly provocative show of largely unpublished work from Dutch designers at the Cooper Union in New York. It will have given designers and clients of today’s “many practitioners, few innovators” scene much to ponder.

Organised by Ellen Lupton, Vincent van Baar and William Deere, the show covered more than 20 designers’ work for a wide range of cultural organisations – theatre, opera, music, film, dance, art and architecture – plus work produced for the private sector, including the Netherlands’ most prominent client of design, the Dutch postal and telecommunications service, the PTT. It would be tempting but ultimately naive to neatly summarise Dutch design. Holland’s unique commitment to individualism and experimentation encourages a multiplicity of styles rather than any single, overarching aesthetic. The result is an abundance of excellent new work.

The graphic design and much of the typography coming out of the Netherlands is a hybrid game of subversion, humour and social responsibility in which letters become visual elements and images speak for themselves. Expanding on or reacting to Modernist traditions, young Dutch designers learn the rules in order to break them. They are eager to carve out their own formal identities, their own visual language, their own graphic culture.

The work on view ranged from the sensible, as in a text-free catalogue by Reynoud Homan for a corporate art commission that pairs elegant photography with abbreviated drawing, to the nearly senseless and virtually illegible typography of Irma Boom and Henrik Barends. But most of the really exciting work is situated somewhere in between, and a resistance to labels is a characteristic of this new idiom. The relationship between text and image is sometimes direct, sometimes rarefied, sometimes almost invisible. All of these approaches, the explicit and the implied, contribute to an understanding of the design process at work, one that may be shared by viewers, but does not rely on their consent for its effectiveness.

If American designers pride themselves on being in the centre of things, the Dutch seem to prefer the edge. Theirs is a tradition of departure: from norms, from conventions, from dogma, from rules. In perhaps one of the most exemplary departures of all, the Centraal Museum in Utrecht two years ago invited several designers to create a new graphic design programme for the museum characterised by an array of highly personal interpretations. From Kees de Bruijn’s dynamic propeller letterhead to Martijn Swart’s stationery border that boasts the museum’s abundant collection of medieval silver, the diversity of styles is as startling as it is appropriate to the range of the museum’s holdings. By subverting the widely held view that house styles are singular and uniform, the museum took a pro-active stance towards its communication with the public and the formation of new ideas about graphics.

The exuberant results only serve to underscore the comparatively paltry view the United States’ cultural institutions seem to have of the design profession. Ironically, the expectations placed upon Dutch designers are closer to those that Americans place on their fine artists. In the Netherlands, designers are expected to stimulate culture and, since the standards for visual communication are high on all fronts, the ensuing relationship diminishes the boundaries between client, designer and public. Instead of the discrepancy that American design students find between the expectations fostered while they are in college and the realities of professional life, the Dutch provide newcomers to the profession with opportunities to design. Since the majority of American clients are not looking for strong ideas, they are less inclined to invest in young designers, forgetting that good design lends credibility to the client and that the client is in a position to set an example.

The climate in which Katherine and Michael McCoy of Cranbrook Academy of Art unrolled their tube of Dutch posters in 1983 is not so different from the climate the profession inhabits today. Design is in flux, poised for a reassessment, a new direction. The United States has always been receptive to outside influence. The introduction of the Dutch influence has been felt directly from teachers and educators, and indirectly through professional contact by American students as interns in Dutch design offices. It is more than coincidental that the publication wreaking the most havoc among old-guard American Modernists is Emigre, a magazine founded by a Dutch expatriot.

American designers acknowledge the emergence of Dutch innovation as the leading edge in graphic design. It should come as no surprise, though, that for a nation of pragmatists, this admiration is tinged with scepticism when typographic treatments become so excessive that they border on becoming a style at the risk of losing their effectiveness as a tool of communication. While some Americans may be initially irritated by the quirky results, many admit an increasing fondness for their novelty and adventurous spirit.

Perhaps the rest of us are only now catching on to what the Dutch have known all along: that exchange, and the tolerance that allows individuality to be embraced and not extinguished, parallels the rising diversity of outlooks that may up the world today. Few among us would wish to dissolve into the melting pot. It is in our common interests to cultivate designers in all their individuality. Which raises the question of acceptance. Since the public has traditionally begun by rejecting what is original and new, can we then assume that work which is immediately embraced is bad? Perhaps the mix of excitement and hesitancy among American designers towards Dutch work is another way of acknowledging its strength. As this exhibition proved, mapping the extremes and finding what is valid in each is the only hope for a new graphic design. 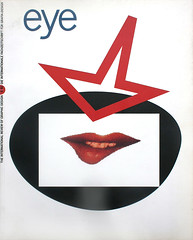