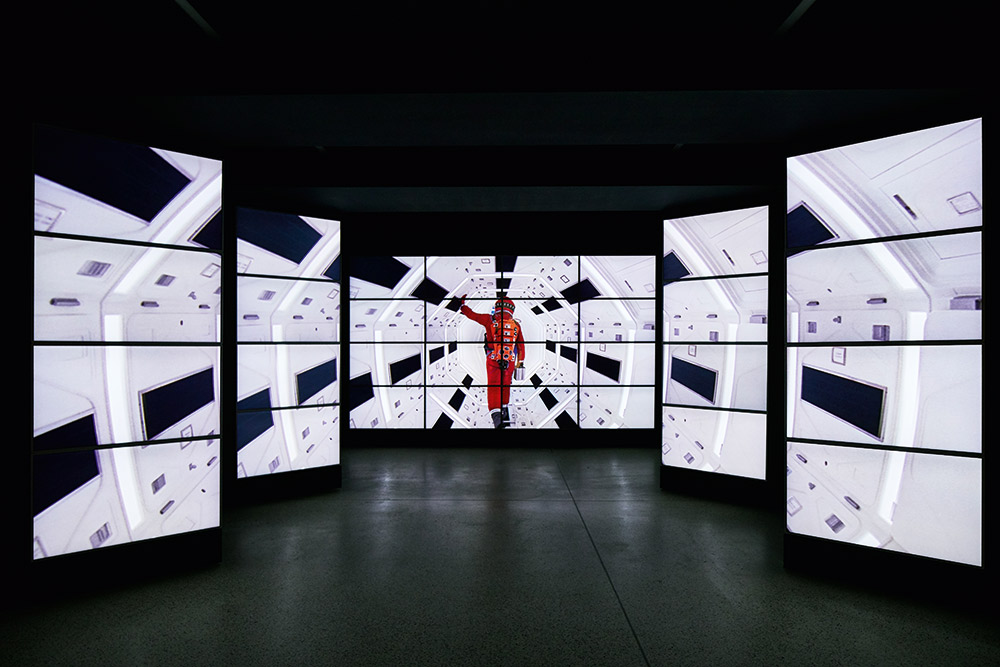 Stanley Kubrick (1928-99) has long been the ultimate designers’ director, a man who presided over an atelier that produced some of the most purely cinematic experiences –‘nonsubmersible moments’, as Kubrick once described them to Brian W. Aldiss – of the past century.

‘Stanley Kubrick: The Exhibition’, designed by Pentagram’s Marina Willer, draws our attention to a Kubrickian visual trope from the moment we arrive.

An arcade of five screens displays film extracts in which the camera moves or zooms into (or out of) a ‘one-point perspective’ vista: the trenches of Paths of Glory; the maze and corridors of The Shining; the symmetrical space station interiors and slitscreen ‘stargate’ of 2001: A Space Odyssey; the classical gardens and landscapes of Barry Lyndon.

Visitors are then taken back to the start of Kubrick’s career, his early films and a sprawling room full of film-making detritus, including notebooks, Sasco cards, umpteen camera lenses, a recorded interview, a script for his abandoned movie about Napoleon and a library of books about the emperor. Letters, telegrams, memos and snapshots build up a strong impression of Kubrick the man, courteous but driven to get the best people in every movie he makes; single-minded yet resigned to the vagaries of the movie business. Some of Kubrick’s early photos for Look magazine are shown on a separate floor of the Design Museum.

The exhibition reveals the director as a man who manoeuvred the large forces needed to make his films with the cool intelligence of someone who once played chess for money, and sold photos to Look while still a teenager. Different spaces focus on his mature work from Paths of Glory (1957) to Eyes Wide Shut (1999), with viewing rooms that show generous excerpts from the movies on reasonably big screens – a thoughtful touch now that so many of us consume movies on small screens. The film extracts were edited in-house at Pentagram by a team led by Willer, herself a film-maker.

Notwithstanding Kubrick’s obvious obsessions, it is good to see extensive credits for designers and image-makers who made such unforgettable contributions: Ken Adams, Harry Lange, Joy Cuf, Fangorn (for AI, completed by Steven Spielberg), photographer WeeGee and Ettore Sottsass. There are Milena Canonera’s costumes for A Clockwork Orange and Barry Lyndon and Saul Bass’s stippled roughs for The Shining, annotated with Kubrick’s terse comments, such as ‘Title looks bad small’. We see Liz Moore’s startling mannequins for the Korova Milk Bar and learn that Moore and her then boss John Barry went on to design helmets and C3PO for Star Wars. Philip Castle’s airbrush artwork for Full Metal Jacket is displayed prominently alongside iterations of Castle’s lettering for Orange Mechanique, Naranja Mecanica and Uhrwerk Orange. A film short foregrounds the role of art director Tony Masters, who said: ‘We designed 2001 as a period. We designed a way to live, right down to the last knife and fork.’

Steenbeck, 6-plate 35mm editing table used for Full Metal Jacket.
Top. The five-screen, ‘one point perspective’ corridor at the entrance to the exhibition, showing an extract from 2001: A Space Odyssey. Photographs: Ed Reeve for the Design Museum. 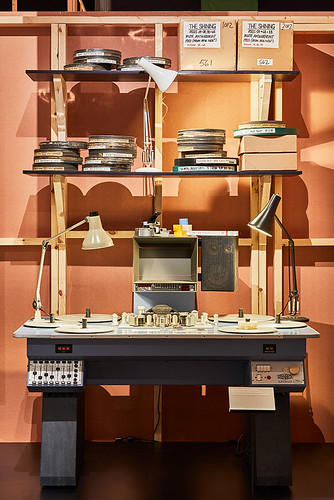