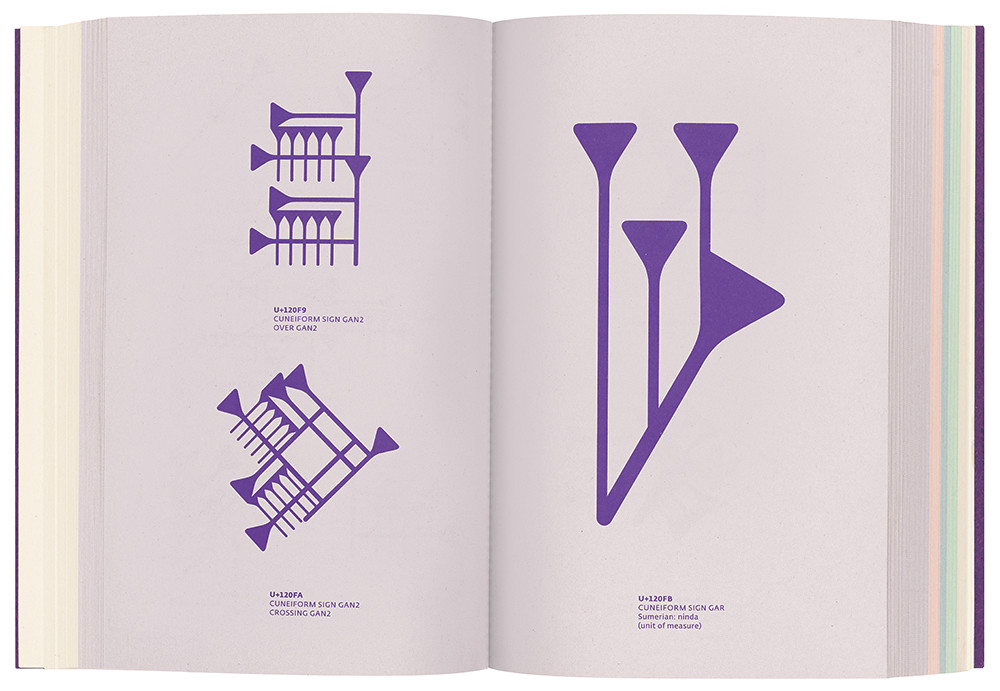 Cuneiform (the name means ‘wedge-shaped’) was, as far as these things can be determined, the first form of writing invented. The original pictographic script, which consisted of symbols representing a word or set of related concepts, was invented in Mesopotamia – today’s Iraq – by the Sumerians some time before 3000 BCE and was taken up afterwards by several other civilisations, including the Akkadians and the Hittites. It remained the main form of writing in the Near East for around three millennia – which is several centuries more than the Latin alphabet has managed so far.

Digitale Keilschrift / Digital Cuneiform unites the oldest communication technology with the newest, completing a kind of historical circuit. It is an offshoot of the decodeunicode project (see Eye 64), which aims to create Unicode versions of all forms of writing. This has practical importance where living scripts are concerned, opening digital technology to marginalised language communities; for archaic scripts the rationale is vaguer, or more quixotic. Digitisation will allow for ease of reproduction and searchable versions of cuneiform documents (more than half a million of these mostly hand-sized clay tablets survive). But, as Johannes Bergerhausen writes, its main appeal will be to those ‘who love losing themselves in signs and symbols’ – or, to put it bluntly, geeks.

The book begins with a brief, clear history (in German and English) of cuneiform, including its rediscovery and decipherment in the nineteenth century, largely by British and German archaeologists – an imperialist project, which demands ironic comparison with the plunder and destruction of Iraqi museums and archaeological sites following the invasion of 2003. This section also gives an explanation of the Unicode project and an account of a new cuneiform digital font that Bergerhausen, Andrea Krause and Stefan Pott have designed. Next comes a complete display of the font, with Unicode code points, including Mesopotamian characters, numbers and punctuation, and the later Ugaritic and Old Persian cuneiform alphabets: 1063 characters in all.

Finally, there are type specimens, including verses from the Epic of Gilgamesh, the first known work of literature.

Along with a six-volume set of multilingual translations of a P. G. Wodehouse short story, this is one of the most pointless-seeming books I own. But, like the Wodehouse, it embodies two things: first, a set of vital arguments about the ownership of culture and the means of communication; and second, a fascinatingly elegant nerdishness. Hard to resist.

Spread and cover from Digitale Keilschrift / Digital Cuneiform showing signs in the font decodeCuneiform.otf designed by Johannes Bergerhausen, Andrea Krause and Stefan Pott. The font is available to all purchasers of the book. 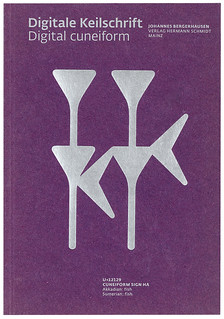