In search of dialogue

Culture is Not Always Popular: Fifteen Years of Design Observer 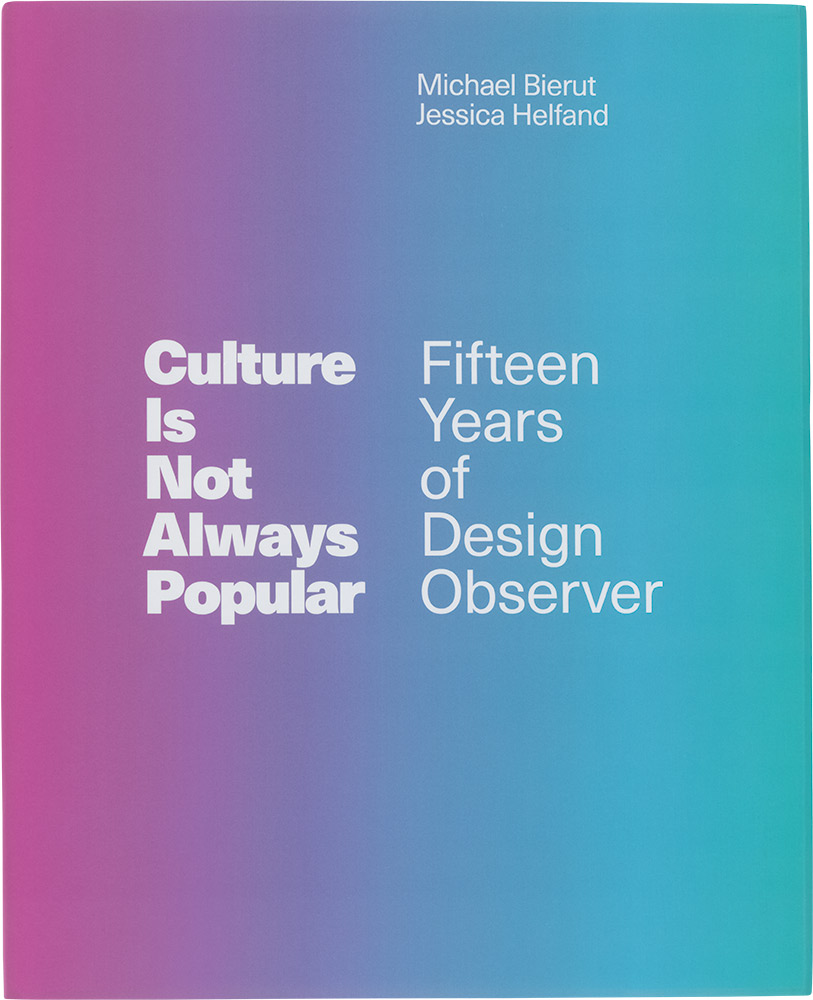 The Design Observer (DO) blog was launched in 2003 by William Drenttel, Jessica Helfand, Michael Bierut and Rick Poynor, apparently with a mission no more clearly defined than to publish ‘writings about design and culture’. By last year, the site had posted 6700 articles by 900 authors and generated 30,000 comments, producing a legacy that, by the editors’ admission, would be impossible to capture in book form. Instead of an ‘authorised history’, they suggest that Culture is Not Always Popular: Fifteen Years of Design Observer should be considered ‘a combination of primer, celebration, and survey, and – perhaps – valediction to a certain moment on the internet’. Judging by the fading visitor interaction with the comments section on DO, that ‘moment’ appears to have been a time when an independent website could facilitate in-depth conversations about design (largely) without the risk of them degenerating into the abusive exchanges that have come to pervade the now dominant forms of social media, to which much design commentary has now moved. Could it be that, in its early incarnation, DO made good on the promise of the internet as a space for genuine dialogue – and if that moment has passed, where might those interested in reading and discussing design criticism congregate now?

Bierut, Helfand and Fuller open the book with a discussion that provides some contemporary context and an overview of DO’s historical development. Fuller’s own Scratching the Surface podcast (see Eye 98) has, in a relatively short amount of time, made a substantial contribution to contemporary design discourse and his involvement here makes a lot of sense, supplementing Bierut and Helfand’s extensive experience with a fresh perspective. Sixty-seven articles are then divided up under the headings ‘Critical Commentary’, ‘Cultural Investigation’, ‘Will and Whimsy’, ‘Reason and Responsibility’, and ‘New Vernaculars’. These categories are intended to give a sense of the range of approaches that the writing on the site encompasses – from sharp critique to brief musings on personal interests – though the groupings lack purpose at times, with entries from one group occasionally feeling like they could have just as easily appeared under the heading of another. A timeline of DO-related and general historical events concludes the book, but feels both too specific and arbitrary to genuinely orient the reader. There are important contributions throughout from the site founders, as well as strong input by Louise Sandhaus, Francisco Laranjo, Andrew Blauvelt, Lorraine Wild, Randy Nakamura, Dmitri Siegel, Maria Popova, John Thackara, Bryan Finoki and Alice Twemlow. But with so many articles included, some inconsistencies in quality are perhaps inevitable, and a number of the entries struggle under the considerable weight of their new hardback presentation.

There are other challenges presented by the content’s migration from one medium to another. The engaged exchanges in the comments section were key to the early success of DO and though some comments have been included to give a flavour of those discussions, one can’t help but think that a more ambitious editorial strategy could have found a way of incorporating them as a more meaningful central feature (if even for just some of the articles). To pick one example, Adrian Shaughnessy’s ‘The Politics of Desire and Looting’, which discussed the 2011 London riots and the graphic design industry’s alleged complicity in it, produced a lengthy debate online that was arguably of greater significance than the article itself. Only two responses from more than a hundred are presented here, and so the much more varied views of the community for whom the article was written are left absent. Of course, you can log onto the site to read these comments – but if the book is intended to capture the moment where these kinds of discussions took place, then why not show them?

Toward the end of the fifteen-year spectrum chronicled here, site comments had regularly dropped to single figures, or had stopped completely. DO eventually took the step of adding a Facebook comment plug-in underneath its posts, presumably in an attempt to reclaim some of the activity that had moved elsewhere. The site has also recently shifted its primary focus to podcasting, which, as a format, can provide a stimulating experience, but lacks the focus of the best pieces of criticism presented here, not to mention their superior re-use value – does anyone listen to a podcast more than once? And so the regularly mooted death of design criticism continues; as Twemlow’s recent history of the field Sifting the Trash argues, today we piece our own cultural worlds together from the complex and messy array of individually customised sources available, with few centres around which to gather as a community with shared interests.

A more upbeat note was sounded by Poynor at the recent launch for Culture is Not Always Popular at Tate Modern in London during the Q&A. As the conclusion inevitably addressed the corrosive impact the attention-sapping culture of the internet is having on design writing, he countered that publications like Bricks from the Kiln, Modes of Criticism, and Counter-Signals, evidence an encouraging critical drive among a new generation of design writers. The extensive range of writing activities undertaken by Fuller’s podcast guests (some of them involved in these very projects) also supports this assertion. Social media may have fragmented the design readership, but there is evidently an abundance of important and newly diverse work being produced across many spheres. Perhaps the greatest lesson to be taken from this record of DO’s significant achievements is its demonstration that a critical mass of participation – from both writers and readers – can be achieved once enough people believe in the project. If design criticism is to rediscover visibility and vitality, perhaps we need to believe in it once again?