Towards a theory of everything design 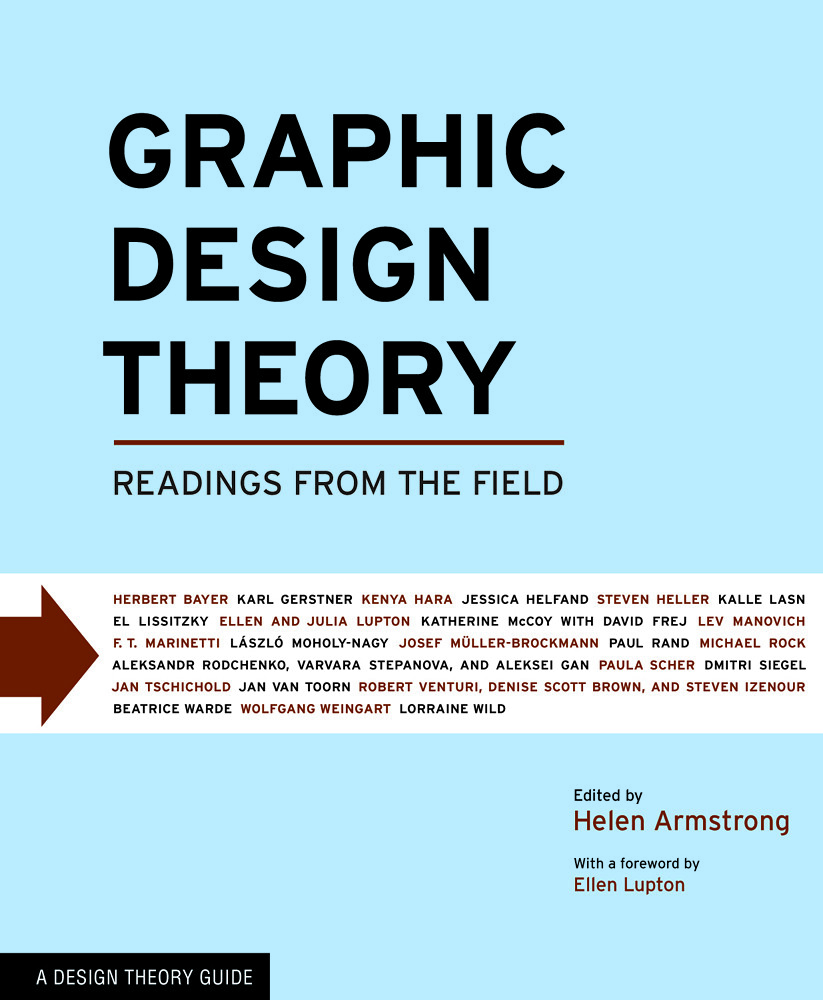 Graphic Design Theory: Readings from the Field has the potential to be a popular academic text. It has all the requisite celebrity essayists and keeps everything short (running to just 145 pages). And above all, it makes a simple plot out of some damn serious hardcore graphic design readings.

Superficially, this book looks like any other design essay compilation. It looks a lot like Allworth Press’s Looking Closer 3 (1999). Four of its essays, and thirteen of its writers, are also represented in that previous compilation – more than a half of the new book’s entire roster. So what does this say about Helen Armstrong’s criteria for inclusion – and the necessity for this ‘new’ volume?

Rick Poynor said that Looking Closer 3 was the first anthology of its kind. I’d like to say that Graphic Design Theory is the first complete storybook of its kind. It does differ in that it offers an overarching story of the discipline, but stumbles by presenting too simplistic a narrative. Its three sections – Creating the Field, Building on Success, Mapping the Future – align too neatly: graphic design as neat, clean bedtime story.

Armstrong opts for a thematic rather than chronological structure. Essays are carefully placed to create a web of connections between them. Some of the connections and segues, however, are forced. They also reveal – unintentionally, I assume – a somewhat insular community of thinkers. Katherine McCoy’s Cranbrook-era essay follows Wolfgang Weingart’s with a reference to ‘Weingart’s descendants’, before handing over to Lorraine Wild, who ‘emerged out of the world of Cranbrook Academy of Art’s design program’. Dmitri Siegel mentions Ellen Lupton. Lupton mentions Dmitri Siegel.

Many of the essays are arguably influential. But Armstrong’s narrative suggests that certain writers may have been excluded because they didn’t fit easily into her daisy chain. There’s no W. A. Dwiggins – the man who coined the term ‘graphic design’. And no Rudy VanderLans – perhaps the most influential figure in graphic design theory and criticism in the past twenty years, both for his own opinions and for publishing Emigre.

As Lupton says in the foreword, this book was developed as academic research, which, I believe, ought to be controversial to a certain degree, and the texts here are compiled from a strong standpoint: what Armstrong calls ‘The Avant-Garde of the New Millennium’.

Graphic Design Theory is suitable for young graphic designers or people from outside the field. It provides a broad range of knowledge with little stress. It can help to educate the eye. And it is obvious that Armstrong was really careful in choosing meaningful and charming readings.

But, having read it seven times to translate it for Korean publication, I can’t shake off my anxiousness that readers might take this too brief, simple and easy story as the entire narrative – particularly since there are not enough examples of critical writing about design available in translation in Korea.

As I said in the translator’s comment for the Korean edition, ‘Reading other designers’ ideas takes effort to understand the situation the writer encountered. Keep this in mind while you are reading this book. However, there is another thing you need to remind yourself after finishing this book: the essays included here deal with just a fragment of Western graphic design society.’

No part of Graphic Design Theory is free from the editor’s (or writers’) subjective vision. So it is crucial for designers to extend a wide hospitality to different points of view. When readers can find plenty of books containing various visions of the field, Graphic Design Theory will be able to stand as one way of thinking among many others rather than an official ‘Theory’.