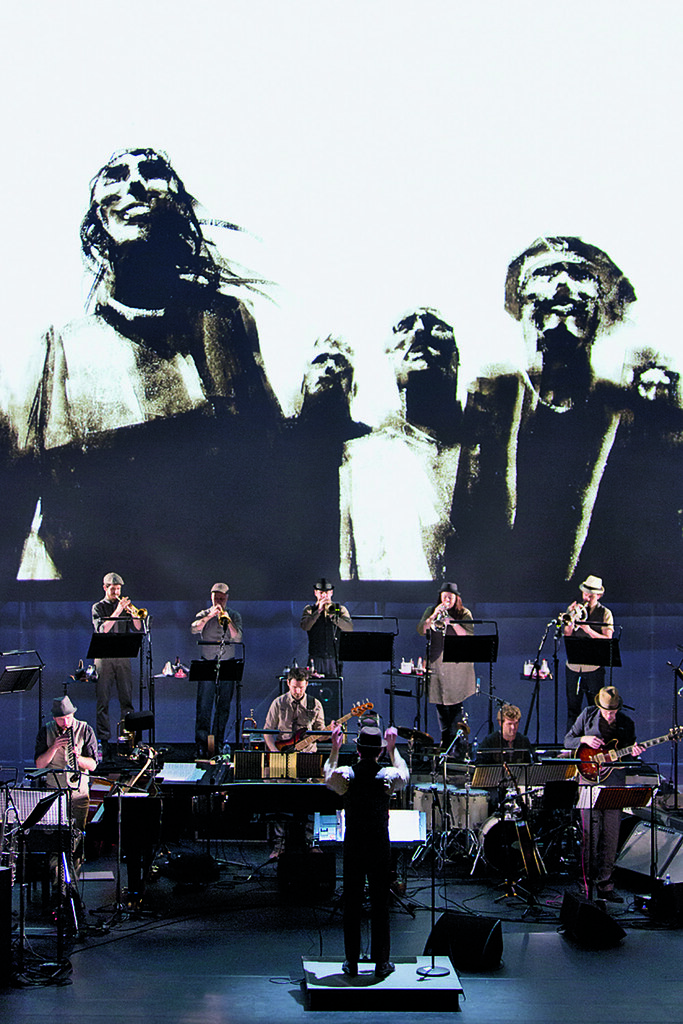 The work, which had its first European performance at Muziekgebouw aan ’t IJ in Amsterdam, is based around an image-rich fable by Žeželj, the Croatian-born, Brooklyn-based artist-illustrator known for graphic novels such as Luna Park and comics such as DMZ.

The story – told through projected animations – tells of a mayor’s ambitions to build a fabulously tall tower in a mythical Brooklyn, destroying neighbourhoods in the process, and compromising Lev, a local craftsman who provides the emotional anchor to the story.

The animations were created by taking digital rostrum shots from above at intervals while Žeželj is drawing them. As the story unfolds, the audience also absorbs something about the image-making process. In parallel to these pre-programmed projections, and in real time, Žeželj covers the backdrop with a dramatic cityscape using brushes and rollers, only to destroy his creation in the closing moments of the performance.

Žeželj performed throughout – painting live on a narrow horizontal backdrop erected high behind the eighteen-strong band, Argue’s Secret Society. The musicians wore costumes that evoked the deliberately anachronistic, early-twentieth-century milieu of the story.

Argue’s music is picaresque, dramatic and occasionally melodramatic as the story demands, but achieves a predominantly visual quality that can be compared to the ballet scores Stravinsky created with Diaghilev a century ago. Each element is compelling and complex enough to be enjoyed on its own – as a wordless graphic novel (Babilon, Petikat) or a music album (Brooklyn Babylon, New Amsterdam Records). However the lasting achievement of Argue and Žeželj is an ambitious and wholly successful fusion of sound and vision.