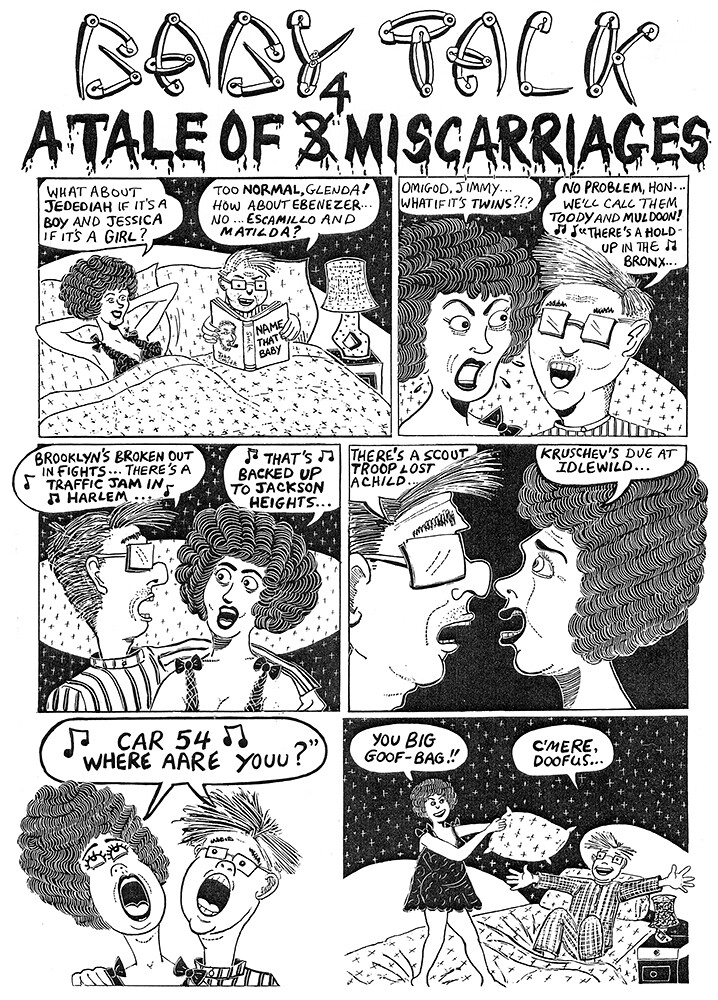 Two recent exhibitions in London shone a light into some less explored corners of the comics world. ‘Graphic Details: Confessional Comics by Jewish Women’ was a visiting exhibition from the US which fitted beautifully into the monochromatic space of Kennington’s Space Station Sixty-Five. The show was curated by Michael Kaminer and Sarah Lightman; the latter has also edited an accompanying book: Graphic Details: Jewish Women’s Confessional Comics in Essays and Interviews (McFarland, $49.95, £39.50). The show included comics by eighteen artists – among them, Trina Robbins, Aline Kominsky-Crumb and Corrine Pearlman – and a short animation directed by Ann Marie Fleming based on Bernice Eisenstein’s I Was a Child of Holocaust Survivors. The aim was to redress the balance of comics history, offering a ‘lesser-known herstory’ to complement the dominant narrative of male Jewish artists and their superheroics.

The diversity of penwomanship and artistic styles, from the gloriously psychedelic to the soothingly monochrome, was tremendous. Although ‘typical’ subjects such as feminism and motherhood featured, the exhibition as a whole was more concerned with interrogating identity and asking the question ‘Who am I?’. These were thought-provoking comics, reflecting on the multiple ways in which we construct and understand ourselves, speaking to universal experience as well as demonstrating impressive innovation. The creators exploded myths and narrative conventions, bringing out what (or who) was hidden – as in Diane Noomin’s Baby Talk, in which fictional protagonists were ejected halfway through the story and replaced by her own, ‘real’ tale.

Moments of dark comedy littered the stories. Many revolved around an event (a party, a date, a restaurant trip, showing one’s flat to a realtor) that took on extensive significance. There was a strong focus on parents – whether Holocaust survivors, as in Eisenstein’s case, or simply generationally different – and their impact on a sense of self. These comics disrupted our understanding of who we think we are, and how we might convey this – as Eisenstein captioned one beautifully composed picture: ‘This is not what my parents looked like.’

‘Southeast Asian Comics’, curated by Cheng Tju Lim, was a micro-exhibit and pop-up library on the upper floor of The Proud Archivist, a canalside gallery / restaurant in Haggerston, made up of a small number of displayed prints of pages and a table laid out with a collection of comics to browse through. Part of the UK’s first Southeast Asian Arts festival, the exhibition aimed to represent the different ethnicities, language and cultures that make up Southeast Asia and to engage with local concerns, personal and political. There was also a collection of websites (curated by Roger Nelson) that gave a regional frame to artistic work.

Two of the hanging pages struck me: one from The Cut by Koh Hong Teng and Dave Chua, made as part of the Singapore Memory Project, showed a poetic map of a village, with locations labelled by relationship (‘neighbours’) or function (‘coconut husks’), rendered in beautifully detailed linework. The second was Phong’s City Tales: Hanoi, strikingly coloured in red and black, with subtle narrative detail (such as the top row of panels shaped to spell ‘Hanoi’) adding a thoughtful layer to what was otherwise a strangely comical tale. But it was the comics laid out for browsing that engaged me the most. Stories ranged from the laugh-out-loud funny to the creepy, from the historic to the modern, and from slick digital art to the hand-drawn. I particularly enjoyed Monsters, Miracles & Mayonnaise (which includes a story shortlisted for a 2013 Eisner Award) by Drewscape (aka Singapore-based Andrew Tan) and The Girl Under the Bed (Dave Chua and Xiao Yan), in which Yan’s style of ‘absurdist chaos and mayhem’ gave the creepy characters a manic air. Some of the comics, such as Morgan Chua’s Tiananmen, looked backwards, while others were bang up to date – such as Adrian Teo and Kenfoo’s Date King, which gave a gendered twist to standard ‘lousy date’ stories, cataloguing male and female ‘types’ using the tropes of video games and nature guides. There was also a stack of smaller comics produced during Singapore’s ‘24-Hour Comics Day’ (in 2011 and in 2012), and while there was a strong autobiographical strain here, variety – visual and conceptual – was still the order of the day.