When the camera nearly always lies

Performing for the Camera 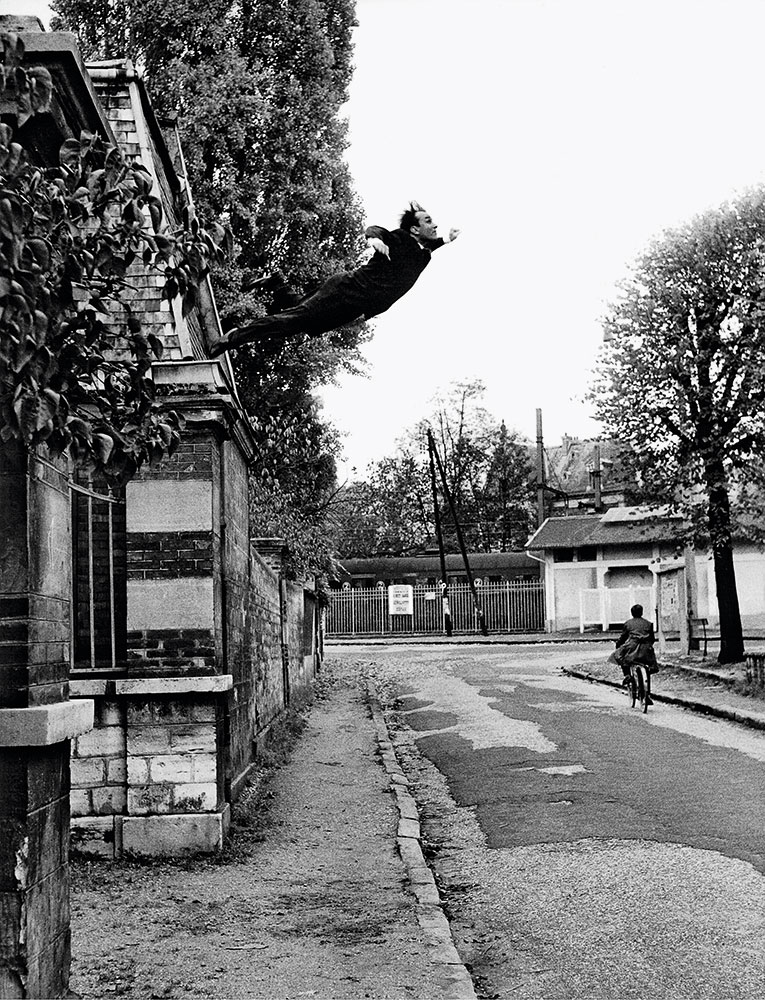 The Tate Modern’s ‘Performing for the Camera’ began with Yves Klein’s famous Leap into the Void (1960), which was paired with several preparatory images shot by Harry Shunk and János Kender (known as Shunk-Kender). These images revealed that Leap into the Void was the product of careful planning and skilful darkroom photomontage, and quickly debunked the idea that Klein’s jump was in any way perilous. From the outset, the camera was positioned as a tool that has the capacity to exceed neutrality and the limitations of truth. It is a device that shifts from recording reality to manipulating – and performing – it.

The first of fourteen rooms continued with small black-and-white images hung side by side, from Aaron Siskind’s Pleasures and Terrors of Levitation (1956-65) to Charles Ray’s Plank Piece I-III (1973). Both series inspired a sense of wonder and highlighted the camera’s ability to freeze time and impart the performer with the capacity to hang in a cloudless sky or dangle precariously from a wooden plank. The exhibition questioned the complex relationship between performer and photographer, and included works that offered something more than documentation.

Shunk-Kender’s portfolio made up a significant part of the exhibition’s early rooms, including photographs of Klein’s Anthropometries of the Blue Period (1960), Marta Minujín’s The Destruction (La Destrucción) (1963) and Yayoi Kusama’s ‘Anti-War’ Naked Happening & Flag Burning at Brooklyn Bridge, New York (1968), among others. This work revealed the complexities of generating artefacts from which the event will later be understood, revisited and collected – this ‘double identity’ of performance art is a growing concern for the Tate Modern since the 17 June opening of the Boiler House and ten-storey Switch House, both of which will show art that will be performed and experienced in real-time.

Also in the rooms dedicated to ‘Documenting performance’ were photographs of Merce Cunningham productions (see ‘Dance on the spot’, Eye 89) of Aeon and Nocturnes. Film-maker Babette Mangolte captured some leading contemporary dance figures, such as Trisha Brown and Yvonne Rainer. Mangolte’s architectural, graphic studies of a New York cityscape punctuated by a single female dancer – Brown – in Woman Walking Down a Ladder and Roof Piece, both 1973, were particularly striking.

Dance threaded through the ‘Documenting Performance’ rooms. In the ‘Staging / Collaboration’ section were facsimiles of a 1961 issue of Dance Experience magazine showing imagery by Japanese photographer and film-maker Eikoh Hosoe. There was a quietness to the exhibition up until this point, which allowed for contemplation of works that welcome myriad interpretations, such as Hosoe’s images of Tatsumi Hijikata, which see the dancer heavily made-up and posing close to the camera’s lens.