The fantastical power of the stylist in fashion photography 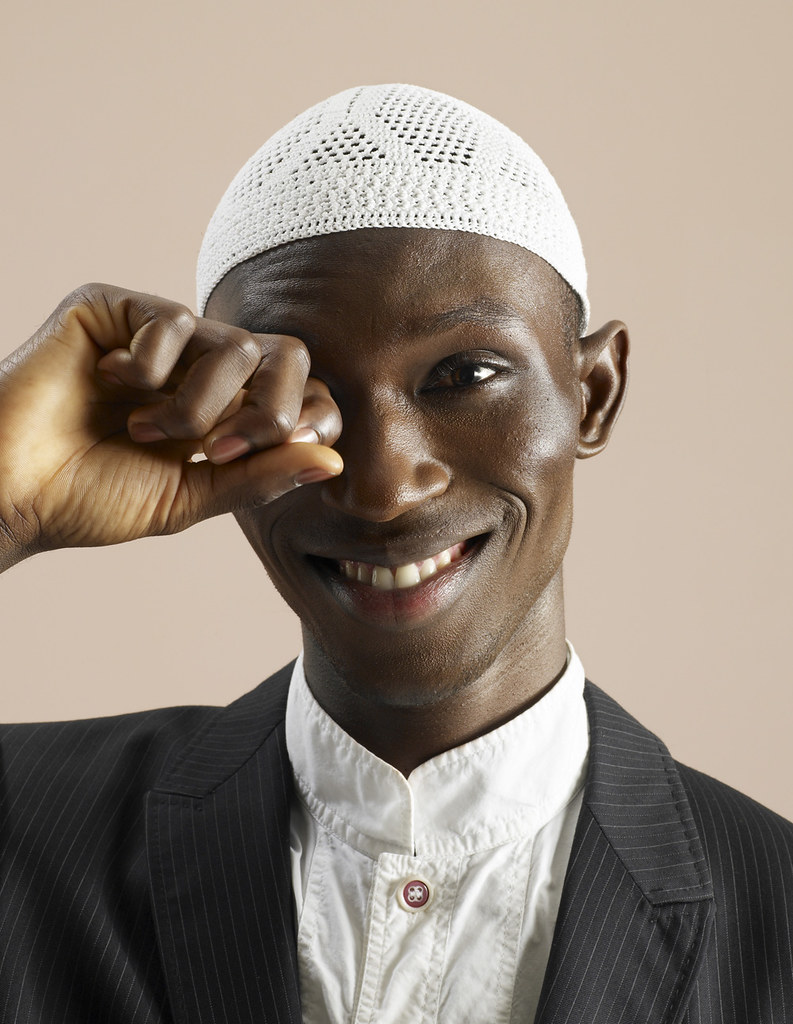 Fashion makes the world go round; without the regular, twice-yearly renewal of consumer interest in making ourselves over, and over, the garment, textile and footwear industries would never sustain the globally-dominant brands and designer labels we’ve come to love or loathe.

Together those industries add up to the world’s most lucrative manufacturing sector.

Selling fashion is, by association, also big business and a major undertaking. You might see what you think is a film unit on location, disrupting the traffic, but more often it’s a fashion shoot – the production logistics being similarly stratospheric – in the process of creating images to aspire to.

Needless to say, photographers are lionised and hero-worshipped, and enjoy the most ‘special relationship’ with fashion’s titular / brand-name designers. Galleries, museums and publishers have played their part in the deification of the photographer too, through the staging of retrospectives and the production of monographs, guaranteeing that some of the best-known names in the history of photography (with real-world, not just industry recognition) are frock snappers. 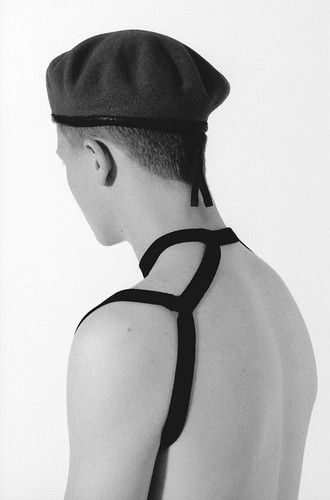 Above: From ‘Atlas’, photographed by Alasdair McLellan, styled by Simon Foxton. Published in Arena Homme Plus, Autumn / Winter 2003

Now an exhibition at The Photographers’ Gallery in London, ‘When You’re a Boy: Men’s Fashion Styled by Simon Foxton’, sets out to lift the veil on the role of the stylist in the creation of fashion photography, by showcasing this undoubted influential practitioner.

We’re told ‘…the previous secret practice of fashion styling is receiving mainstream exposure for the first time in cultural history through regular coverage in makeover TV and weekly celebrity magazines’.

Dressing Hollywood (or Hollyoaks) sirens for the red carpet, or revamping a middle-aged housewife on prime time, is not the point though, because styling ‘proper’ isn’t really concerned with what flesh and blood people actually wear. 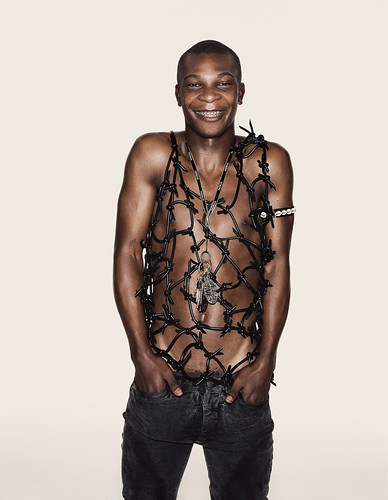 Above: From ‘I Wish I Had Invented Blue Jeans’, photographed by Simon Thiselton, styled by Simon Foxton. Published in i-D, August 2008

Styling is one element of the fantastical process that creates fashion photography; the stylist is a go-between who fulfils a number of different roles. On the one hand, they’re the fashion designer’s sounding board, accentuating the seasonal themes without losing sight of the brand message; from the moment a collection swishes down the catwalk to its re-presentation in the editorial and advertising pages of glossy fashion magazines. On the other hand, a stylist acts as content provider for the fashion photographer who will want to produce images independent of any one fashion brand (even though the eventual goal is to land a lucrative advertising commission). Together, stylist and photographer will collaborate on the ‘story’, the concept; then the stylist will gather in the swag and cast the willing bodies, while the photographer organises the equipment, shoot and location.

At The Photographers’ Gallery, Foxton’s career since the 1980s is recounted by means of a selection of photographic images created in collaboration with various photographers. He works exclusively with menswear and male models, presenting archetypes that are sexy, funny, melancholic, strong and scary; superheroes, the boy next door, villains and angels. 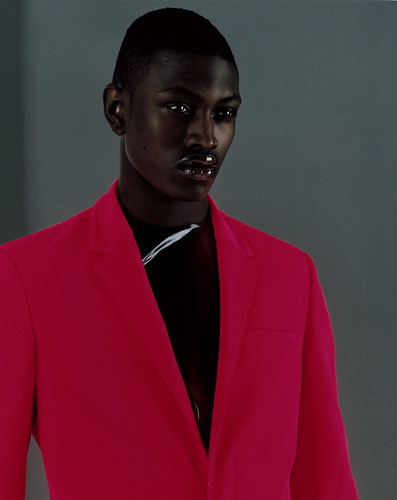 Above: From ‘Tooling Around’, photographed by Ben Dunbar-Brunton, styled by Simon Foxton. Published in i-D, February 2009

And judging by the selected images on show, Foxton’s renditions of masculinity complement each photographer’s personal vision; whether it’s Nick Knight’s techno-fuelled drama of digitally-mutated ‘gods and monsters’; or Jason Evans’s surreal take on the everyday, snapping sartorially-challenging young men larking around in suburban cul-de-sacs and ring-road, big-box stores.

The photos in this show are credited as being published in magazines, most prominently i-D. (See Reputations interview with i-D creative director Terry Jones, Eye 30). Some of the images on display are actual tear sheets (i.e. printed pages torn from magazines) as opposed to photographic prints. But the role of the magazine’s designer / art editor / art director / creative director (titles vary) in this mediated version of fashion is unacknowledged.

True, photographers and stylists often collaborate on a ‘story’, without being commissioned, waiving any fee and simply paid expenses, so as to gain exposure, the finished images being presented to a magazine on spec. But the work of the art director in selecting one photographer over another, and in ordering and pacing the images that eventually materialise, is what transforms a (sometimes tenuous) collection of photos into jaw-dropping magazine pages.

That Foxton thinks ‘graphically’, and considers how layout, headline and type will enhance the photographic images, is evident from his collection of sketchbooks on show. Featuring found ephemera – ticket subs, sweet wrappers – he layers words over images torn from magazines and Polaroid test shots of prospective models, all carefully placed on each page.

OK, so it’s the Photographers’ Gallery, but in this instance it’s the stylist’s. An exhibition that tells the entire story of how fashion makes it on to the page with the help of the art director – and out to the audience that may never see the real garment – would be an interesting exercise.

When it comes to working with a fashion brand on its own advertising and promotional images, the art director is equally crucial to the proceedings, as advertising agencies are rarely used. In affect, the independent, or in-house, art director becomes the brand guardian.

Of course, fashion being fashion, there are no rules and many exceptions; but without the expertise of Art Directors of the calibre of Robin Derrick (British Vogue), Phil Bicker (The Face), Stephen Male (i-D, US Vogue), David James (Prada) and of course Fabien Baron (too many to mention, see Reputations interview in Eye 18), many photographers may have gone unnoticed. That initial editorial hook-up would eventually earn the attention of the big-buck-paying fashion labels, looking for the latest innovator ‘make over’ their own advertising. 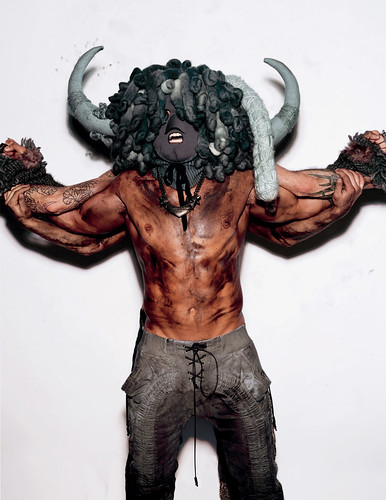 Above: From ‘Galliano’s Warriors’, photographed by Nick Knight, styled by Simon Foxton. Published in Arena Homme Plus, Summer/Autumn 2007

For another example of the photographer and fashion designer’s ‘special relationship’ at work, check out this hefty tome; Marc Jacobs Advertising 1998-2009. These collected campaigns, shot by Juergen Teller for Marc Jacobs, are notable for featuring unlikely, non-models, in the various shapes of celebrities drawn from the worlds of music, film and art.

Jacobs’ New York-based art director is Peter Miles, previously of the parish of Spitalfields and at one time a third of FUEL (see Eye 11). He’s credited with designing the book (in collaboration with Teller), but his role in the production of the campaigns, however, remains less clear, as the collaboration is written up as simply two-way. In a book like this, which documents such a comprehensive but cohesive project, to not tell the entire story seems like, yet another, missed opportunity.

When You’re a Boy: Men’s Fashion Styled by Simon Foxton
The Photographers’ Gallery
Until 4 October
www.photonet.org.uk