Careful with that AK47, Mikhail

Paper assault rifles and the well crafted design of fear 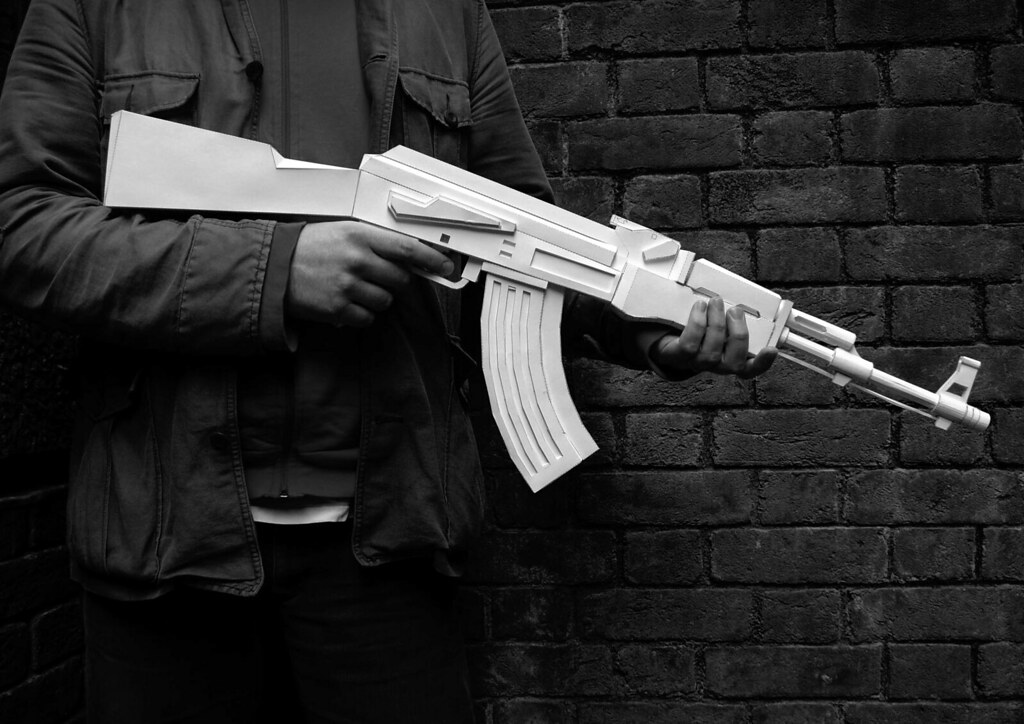 Looking for the ideal holiday-time craft project, asks Liz Farrelly, something to keep your brain from seizing up during two weeks’ house arrest.

Get your Exacto knife skills up to scratch with this self-assembly paper kit 1:1 scale model of the AK47 Assault rifle, the most iconic ‘Death Machine’ ever dreamt up by an industrial designer, the ‘Avtomat Kalashnikov obraztsa 1947 goda’ [Kalashnikov’s automatic rifle model of year 1947].

Lying in a hospital bed recovering from battle wounds during the Second World War, Mikhail Kalashnikov entered a competition to design a new weapon. The Italians and Germans had already developed a radically different close combat firearm, the submachine gun, which delivered more rounds over a shorter distance than a standard rifle, and better suited to the type of scrappy ‘fire fight’ occurring in war-torn Europe.

Still a favourite, this type of gun is the world’s biggest seller, and more than a million are manufactured illegally each year. The Russian Izhavsk Machine Tool Factory acquired the patent in 1999. 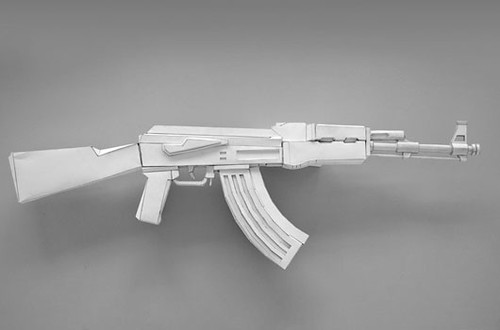 The paper kit version is also a best seller, doing a roaring trade, according to the publisher’s UK rep, in that outlet most favoured by graphic designers, Magma. Packaged with a grainy black and white photograph of a faceless man in a flack jacket (not a regular combatant), brandishing the finished article, its paper whiteness is knocked back in the image, giving an impression of cold, grey steel. Muss up the surface with a bespoke camouflage pattern, and you’d be well advised to keep this convincing replica off the streets, especially in parts of the world where you might ‘draw fire’.

That said, the paper kit sorts the ‘men from the boys’; Airfix it’s not, being made of flimsy card-stock rather than plastic. The instructions take this on board, suggesting that you simply substitute more paper if you happen to rip, make a wrong incision, or saturate a component with glue.

The five sheets of components come with an A1-sized instruction poster, and although the ‘exploded’ line drawings are appealing, the written instructions leave much to be desired. The mix of floating directional arrows and badly subbed copy, written in not-quite English, don’t inspire confidence. Warnings are given: ‘Recommended for experienced crafters.’

Do today’s designers qualify, or has all that time deploying a mouse diminished their hand skills? (It’s not digital craft, see Eye no. 70 vol. 18. Nor is it origami.) Similarly, ‘Construction time depends on handcrafting abilities’, but you don’t have all the time in the world . . .

Well and truly foxed by the whole proceedings, and knowing that I personally can’t fold and score such teeny-weeny pieces of paper, I took myself off to the designer’s website, and on to the linked site. Dedicated to an exhibition held earlier in 2008, paper-wars.com features several ‘Death Machines’ constructed using folded card, by Martin Postler, which have been decorated and customised by invited collaborators. 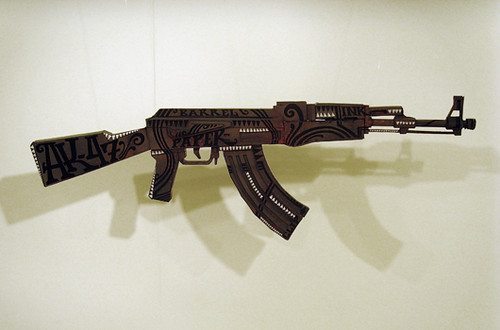 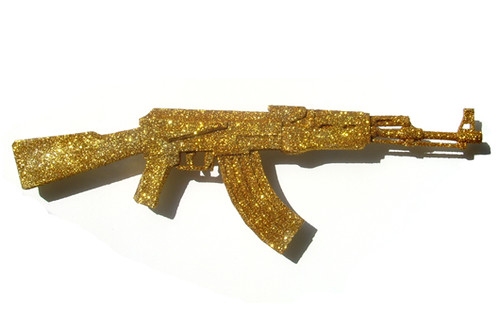 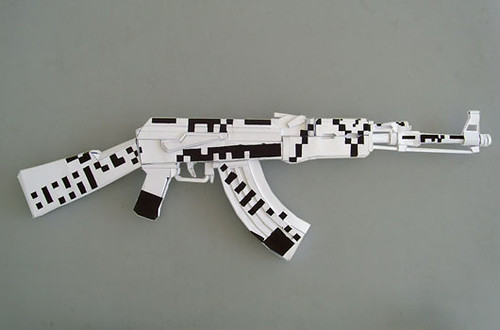 Here Postler’s motivation becomes clear. He describes the Death Machines as ‘icons of designs’, embodying ‘good engineering, reliable performance and robust construction’. Meanwhile ‘the paper kits bring the contradictory experience of weapons into the home’, the aim being to demonstrate that they are ‘admirably designed and aesthetically fascinating and simultaneously terrifying in their lethality’.

The level of skill and effort that Postler and his colleagues at Postler Ferguson have demonstrated in organising the exhibition and developing these paper products is awe-inspiring, most especially in relation to the construction of the Oerlikon 35MM anti-aircraft gun (model, below), a staple of modern warfare since the First World War. 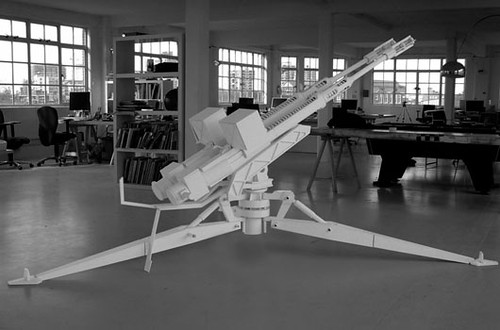 But, I can’t help thinking that the majority of Postler’s audience for these kits just think, ‘cool’, and will happily brandish their paper weapons around the studio, shooting both troublesome colleagues and clients in the back without a second thought . . .