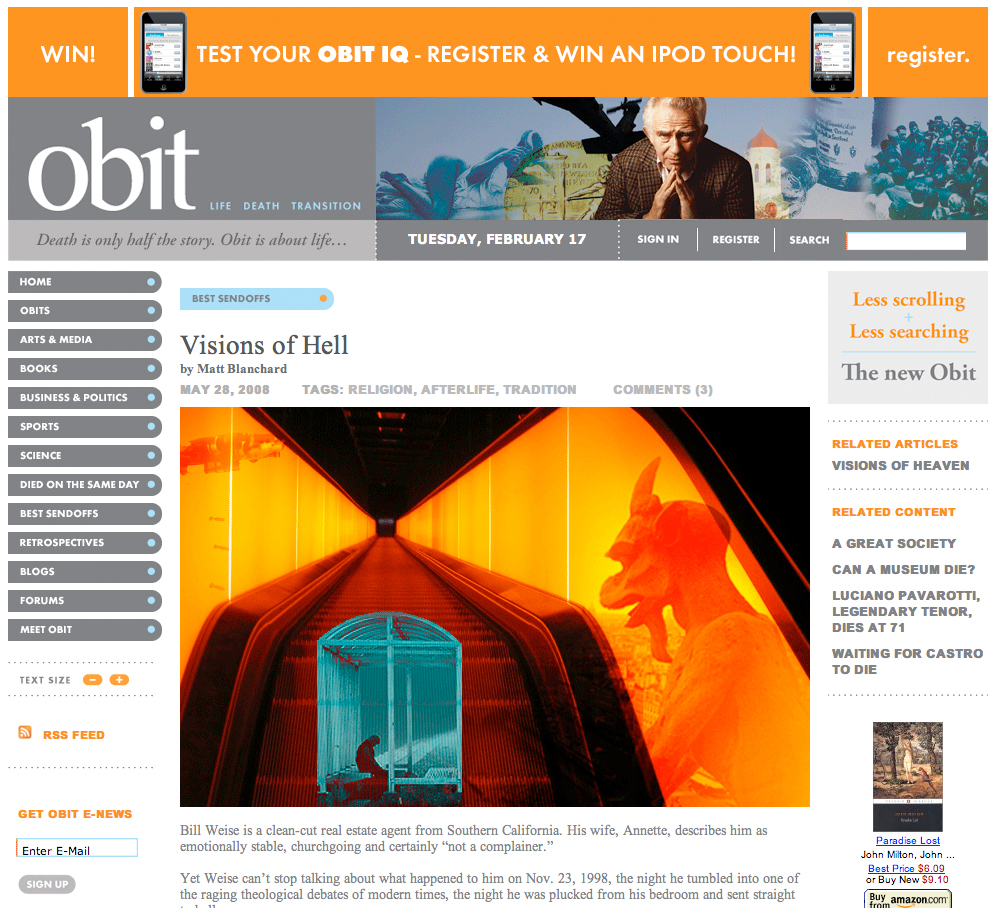 This American blog-mag reminds us that obituaries are about lives lived.

At a certain point in your life, you find yourself drawn to obituaries, writes Rick Poynor. Your own departure, once so far away and impossible seeming, is now a racing certainty. You are more than half way through and people who were middle-aged when you were young – actors, politicians, TV personalities – are showing up in the obituary pages with sobering regularity.

They were part of your scenery and now they are gone, adding to the sensation that the years are flashing by. Then people you know begin to die, sometimes long before their time. The obituary section, once a bit of the paper it was easy to overlook, has become one of the first items to scan. This isn’t just about death: it’s about how lives were lived, and even the lives of people you have never heard of before, but feel you ought to know about, become fascinating.

So I was an easy mark when the blog-cum-magazine Obit started sending me emails with word of its latest obsequies. I assumed this American venture must be new. The publication actually started in April 2007 and it was supposed to go hand in hand with a printed magazine – if this ever materialised, it seems to have gone the way of all things. The site, launched by architect-entrepreneurs Robert and Barbara Hillier, who own a Princeton community newspaper, is aimed at American readers and many of its obits, written by a team of ‘30 award-winning book authors and journalists, under the direction of Avery Rome’, are about people best known in the US. As I write, the most recent send-offs include Estelle Bennett, of the 1960s girl group the Ronettes (67); Dewey Martin, Buffalo Springfield’s drummer (68); and Helio Gracie, pioneer of mixed martial arts (95).

The most intriguing parts of the site interpret the theme of demise more broadly. Obit waved a not-so-distraught farewell to George Bush and his presidency, which expired by ‘constitutional fiat . . . after a long and debilitating illness’; mourned the bankruptcy of Muzak Holdings – ‘Love it or hate it, Muzak needs to be included in the nation’s bailout proposals. We need its numbing effects’; and sounded the knell for the once popular American newspaper. Somehow I missed the April 2008 exit of Albert Hofmann (102), Swiss inventor of lysergic acid diethylamide (LSD). Obit helpfully provides a clutch of YouTube links to pop classics such as ‘White Rabbit’ and ‘Lucy in the Sky with Diamonds’.

Leaving no aspect of the life after life unconsidered, a couple of articles examine the American take on heaven and hell. According to ‘Visions of Hell’, 62 per cent believe hell is a real place, including the author of a book describing the 23 minutes he spent in the care of two thirteen-foot reptilian devils who gave him a foretaste, on the house, of the discomforts to expect from an eternity of pain. Repent now, sinners! Like many of Obit’s features, this one is tastefully embellished by the site’s design director, Jorge Naranjo. Eschewing lizard monsters, the illustrations symbolise infinite torment as a pair of red-hot escalators Photoshopped with images of confinement and just one brooding gargoyle to hint at Satan’s abominable hordes. 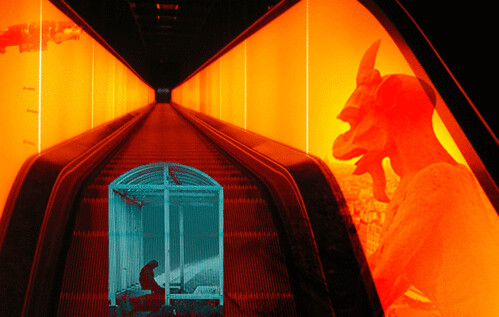 Obit’s masthead is its most graphically confident feature. The solid blocks of colour, orange and grey, convey a restful, restorative strength. In a changing picture panel – I saw three versions – recently departed literary colossi such as Norman Mailer and Kurt Vonnegut clasp their hands in acts of contemplation that, for the faithful, suggest prayer. A site like this could have gone to town with gothic funeral parlour detailing or Six Feet Under-ish sprigs of macabre humour, but this would have restricted its appeal to the morbidly inclined. Obit’s aspirations – ‘Life, Death, Transition’ – are more wholesome and life-affirming, if not a bit new-agey. It avoids black entirely. Even the text type, a routine Times New Roman, has been Xanaxed into a calming grey. Although it is possible to increase the text size, which is too small at the lowest setting for the column width, the stories are not as readable as they could have been.

All the main content is accessed from rounded bars on the left – Obits, Business & Politics, Best Sendoffs, Died on the Same Day, etc. This gives the impression that the site contains more material than it perhaps does. Obituaries do double duty in other sections. Click on Coosje van Bruggen (66) in Arts & Media, hoping for a full appraisal of the Dutch-American sculptor and critic, and you find yourself back in Obits. As with any Web magazine, funding and resources must be a constant struggle. I wish it a long life. 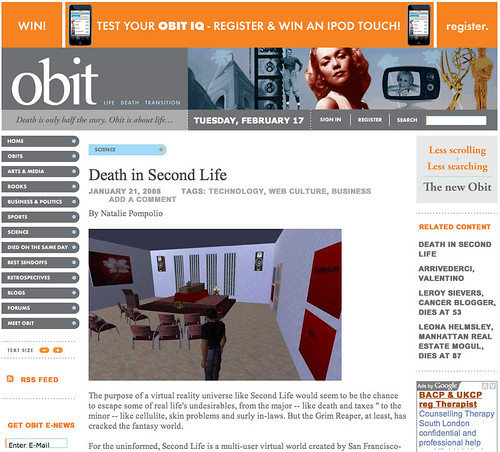