Paolozzi and Foreman and Bax and Ballard: the ‘jet age’ family of Ambit 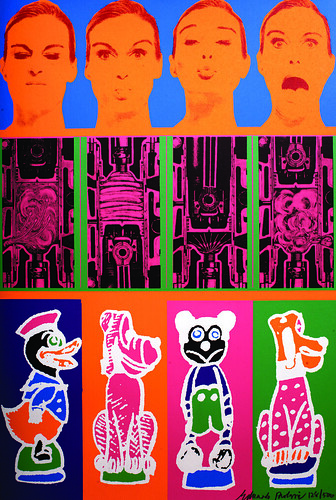 The show follows (and shares its title with) the publication of The Jet Age Compendium, a book reproducing pages of the tenacious art magazine and Paolozzi’s artwork (see Rick Poynor’s review ‘Metafisikal experiments’ in Eye 72).

Above: Moonstrips Empire News: Secrets Of Internal Combustion Engine, 1967. Paolozzi's first contribution to Ambit was an adaptation of this series of prints.
Below: The Jet Age Compendium: Paolozzi at Ambit. By Eduardo Paolozzi, with an introduction by David Brittain. Four Corners Books, £12.95. 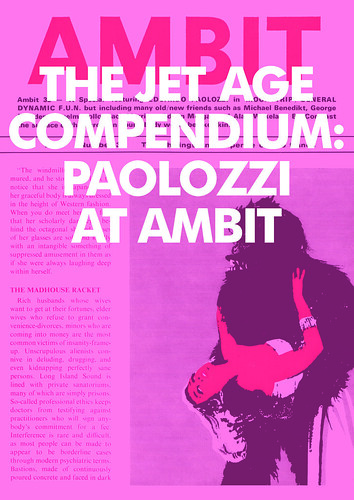 David Brittain, who introduced The Jet Age Compendium and has written extensively about Ambit and Paolozzi (see Eye 65), is an informed curator. His portrait of the artist begins before Paolozzi's time at the magazine, with a small sample from the Krazy Kat Arkive. Now held by the V&A, the Arkive includes 41,000 items amassed by the artist from the 1950s onwards. An obsessive collector and archivist, Paolozzi was known to carry around plastic bags full of press clippings that he would later categorise and file. On show at Raven Row are scrapbooks of material donated to him by American servicemen, set alongside a retro-futuristic collection of space-age toys (see below). 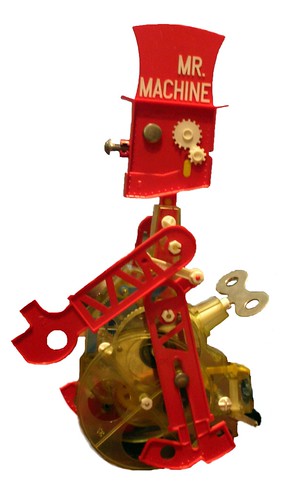 Paolozzi (1924-2005) began contributing to Ambit in the late 1960s, having been introduced to the publication by close friend J. G. Ballard (1930-2009). But, like Ambit’s editors, he was interested in much more than putting artwork to stories and poems. Paolozzi’s ‘news’ pieces construct a visual literature from collages of images and text, cut and pasted from Japanese and English newspapers. It’s interesting that this designer became just as obsessed with writing during his time at the magazine, and his collage novels like Why We Are in Vietnam found an appropriate home on the publication’s pages (cover pictured below). 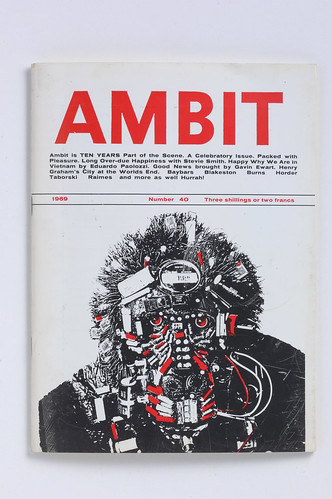 Ambit’s opposition to war continued with the Vietnam Symphony. Written by founder and editor Martin Bax with composer-trumpeter Henry Lowther, this jazz opera was performed at the ICA, broadcast on BBC Radio 3 and printed in the magazine alongside images assembled by Paolozzi. The gallery have installed headphones playing extracts from the Symphony; glancing over Paolozzi’s montage while listening to the music is one of the highlights of this collection.

Bax was present at the private view, and told me that he felt that other key members of the Ambit family had been somewhat neglected. A cover by illustrator Mike Foreman – who joined the magazine as art director at issue 11 – is on display, but there is a blank space where perhaps a caption should be. Paolozzi’s work for Ambit is arresting, fascinating and daring. But even though his is the name that is capitalised and set to neon pink, don’t forget the rest of the family.

Below: Ambit No. 50, 1972. Cover shot of members of the Ambit ‘family’, taken at the Royal Academy of Arts by Andrew Lanyon. In the foreground is Euphoria Bliss, a regular on Ambit covers. Behind her, seated, left to right, are Eduardo Paolozzi, J. G. Ballard and Michael Foreman, with Martin Bax standing. 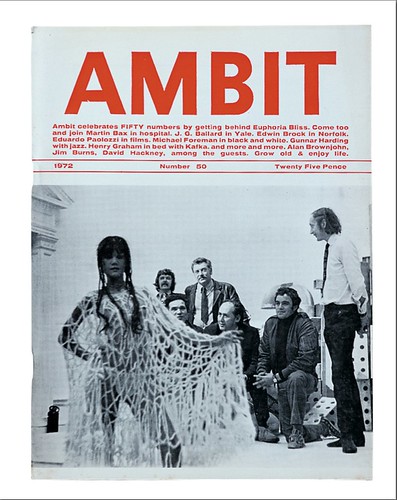