Lego, ‘500 years of Tweeting’ and cake in Sheffield’s Cutlers’ Hall. 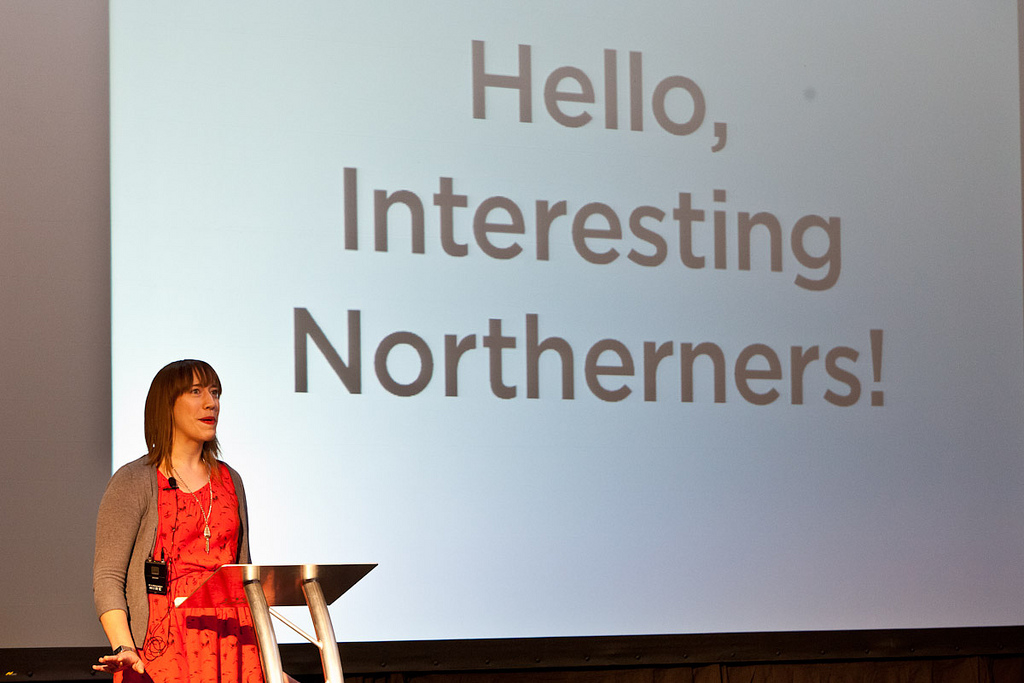 The event built upon the previous ones developed by Russell Davies, Interesting 2007 and 2008, which followed Interesting Sydney and Interesting New York. This venue was built by the Company of Cutlers in Hallamshire in 1638, with the Banqueting Hall being added in 1867. 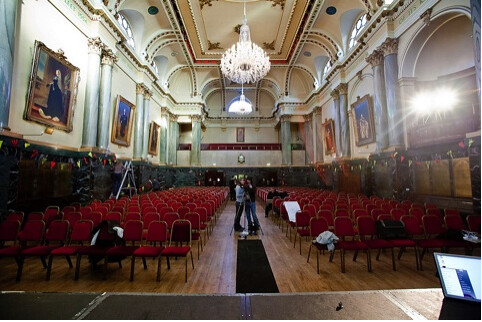 Greg Povey of the organising team explained why they chose Sheffield: ‘We thought about Liverpool, Leeds, Newcastle, Manchester or Sheffield as a base for Interesting North. Each has their own things going on (hacking, creative scenes, Thinking Digital, FutureEverything, BBC North etc.).

Sheffield came out tops because it has a very particular feeling, harking back to its days as the capital of the ‘Socialist Republic of South Yorkshire’ as well as its rich industrial past. It’s a DIY-city with a creative community and a particular slant on the world. It is welcoming and friendly. It isn’t too concerned about being the “Second City”, but it certainly drives a lot of forward-thinking activity. It’s also where we live, and we’re pretty happy about that.’ 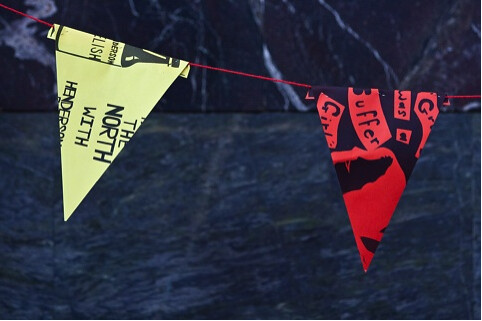 The day was sold out with approximately 260 people attending. The day began with organiser Tim Duckett [@timd] of adoptioncurve.net, who described the ‘Interesting’ events as ‘TED crossed with a village fete.’ Twitter names in [square brackets]. 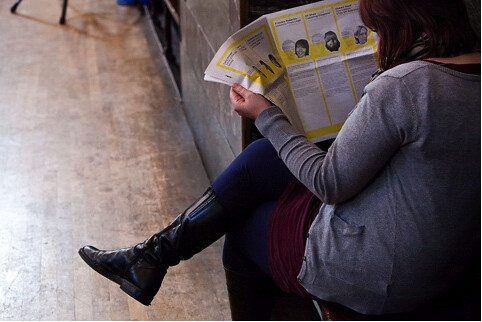 Above: Design for the day by David Bailey, Kiosk.

There were 21 speakers, coffee break, lunch, tea break and a mass game of ‘rock paper scissors’. Chris Bell [@chrisbell] discussed ‘500 years of Western Tweeting’, quoting Burroughs with an authentic accent! This was a great start and set the tone.

Stefanie Posavec [@stefpos] (top) introduced her fascination for baseball score cards. Being a brave woman, she dared to tell a Yorkshire audience that baseball is more interesting than cricket! When backed up by evidence relating to hot dogs, pretzels, peanuts, fireworks and singing, some of the audience is calmed a little.

Above: baseball card image from by Stefanie Posavec, scored by her father.

Stefanie showed charming examples of score cards that demonstrated a ‘notation system’ developed through families, passed down from father to child. They included shorthand and symbols recording the weather, how interesting the game was, the fan’s frustration and thoughts on the players’ haircuts. The point to all this being that it involves the audience in the process of recording, requiring a level of understanding, interest and participation that builds a stronger emotional link with the game. 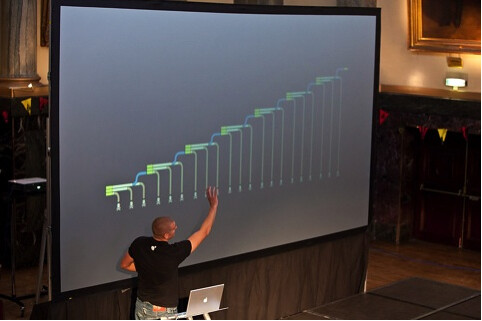 Above: Nick Foster [@fosta] discussed the relationship between nature and the design process using Darwin. 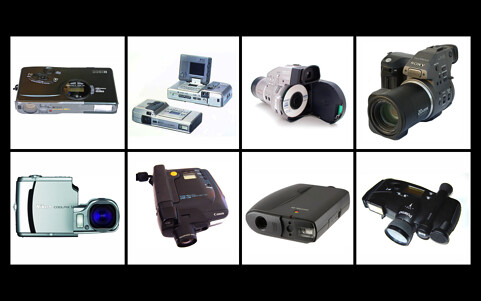 Above: Nick Foster’s ‘The development of the digital camera’ – the ones that fell by the wayside. 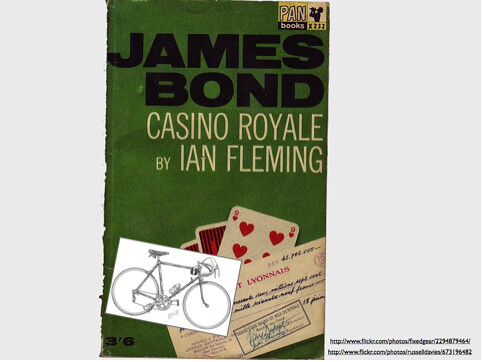 Above: James Boardwell [@jamesb] talked about the future of cities and bikes, and what the future might be like if James Bond had ever escaped a burning building on a bike. The idea of soft cities is appealing and the point where we all stop to marvel at urban bmx trickery is a joy. 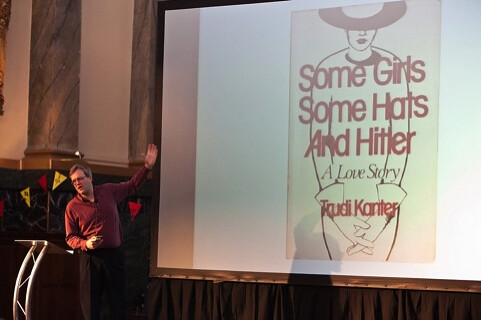 Above: James Wallis [@jameswallis] delivered one of the best crafted talks with the longest title, ‘Works of Fiction With Really Stupid Titles Involving The National Socialist Government of Germany 1933-1945’ – entertaining and ending with a stunning bump. 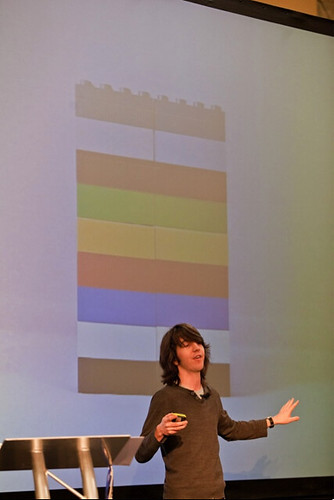 Above: After lunch, Frankie Roberto [@frankieroberto] talked about his love of Lego. ‘Sorted by size, but not by colour, because that would be weird, right?’ Frankie explained how a slight change in the grey caused trauma to the Lego community. 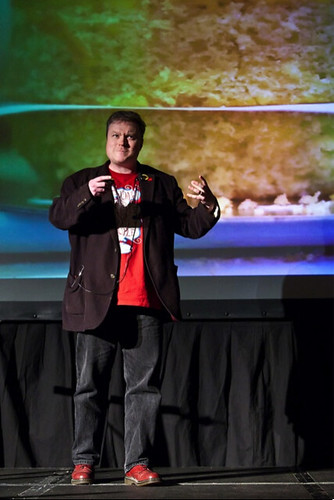 Above: Mike Wallis [@nalsa] explained the science behind cake and why it is not the same as bread and is lighter and fluffier. His images were fabulous: following a cakeless tea break, this was torture. 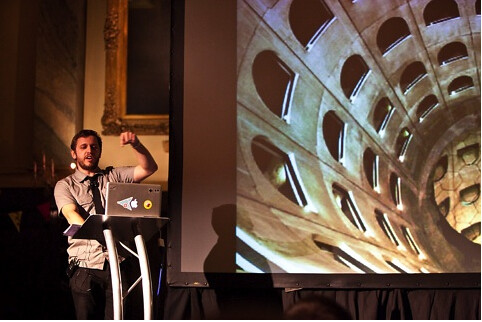 Above: Finally Toby Barnes [@tobybarnes] delivered a passionate plea for letting our imaginations run a little more wild and recognising ‘The tiny horse in the Apple Store’ from Frank Chimero’s site.

A great end to a truly interesting day.

In short, ‘Interesting North’ was just what it said on the tin. I left with so many notes and interesting things to follow up; books, quotes, board games, blogs and people to contact. Looking forward to next year …

Below: A gallon of, Sheffield’s own Henderson’s Relish, the prize for the mass ‘Rock, Paper, Scissors’ game. 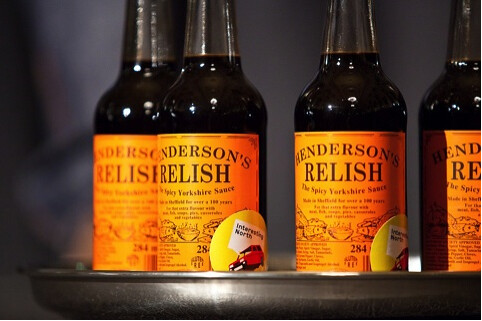