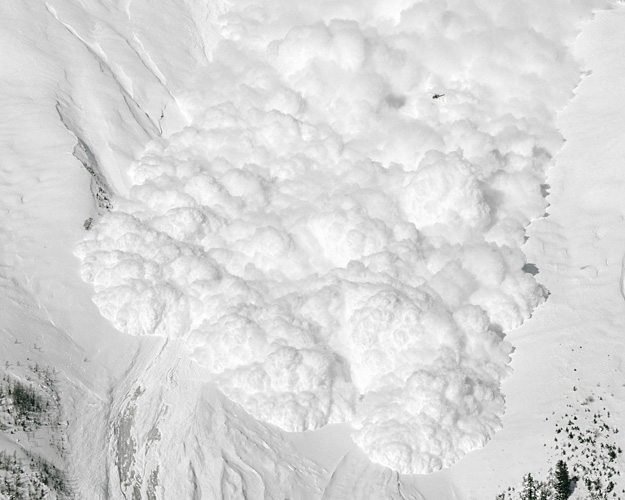 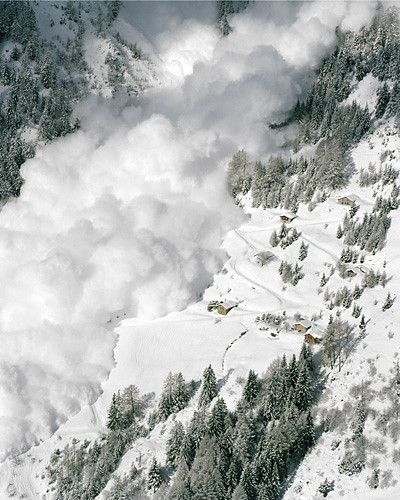 At first glance the images seem relatively simple. In each case but one, the avalanche’s tumbling snow has been abstracted by the absence of a horizon. Taken out of context in this way we see first a pattern, and only afterwards the houses and trees that tell us we are observing a natural phenomenon. 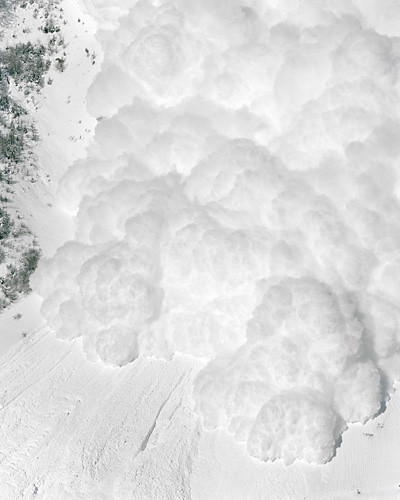 So in viewing the photographs, are we exercising power over the landscape, or giving testimony to its sublime power over us? Because of the graphic abstraction and lack of scale, it isn’t possible to lose oneself in awe of nature as it is in so many landscape photographs, let alone paintings. The pure verticality of the perspective makes it difficult, too, to find one’s position as a viewer – in this sense the images work more like maps or models than pictures. And as in the case of maps, the very ability to abstract something so powerful and so big as an avalanche seems a kind of human triumph in itself. 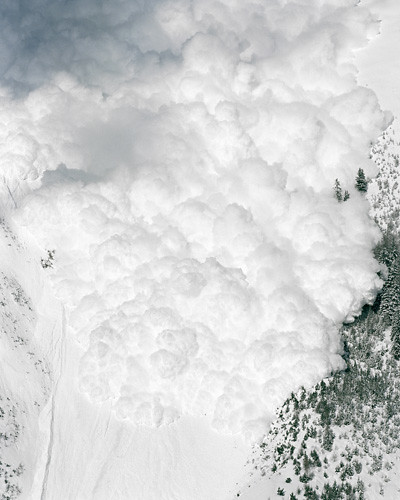 This suggestion of human mastery is further supported by the fact that in this case the avalanches have been artificially induced, as Gross tells me. In order to keep mountains safe for skiers, dynamite is exploded periodically to move loose snow that could prove dangerous later on. The ability to reduce unpredicted avalanches has improved with technology to the point that the event can be conceived of as constructive, as part of the routine maintenance that makes the mountains accessible, rather than destructive. These avalanches, like the abstract patterns in the photographs themselves, are the result less of nature than of human skill: if not art, artifice. 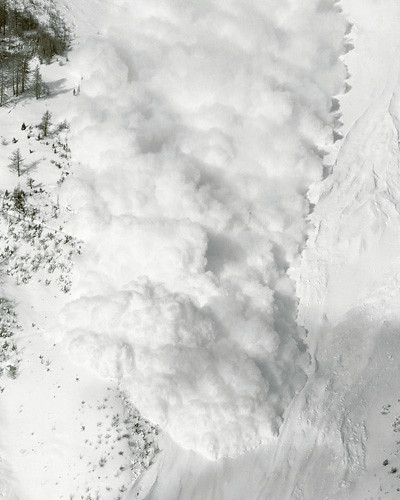 But for all that they are difficult scenes to photograph. Gross tells me he tried some 30 times over six years before coming out with a series of seven avalanches. Each time he first had to scale or descend a cliff facing the slope where the avalanche would happen.

‘You have to have enough snow. You have to be ready at a moment’s notice. You have to hike to the site, and you have to find a place across from the explosion. After all that, sometimes the avalanche is too small to be interesting. And then you have to have sun, or the whole thing comes out white’ he says. So in this sense nature retains the upper hand. 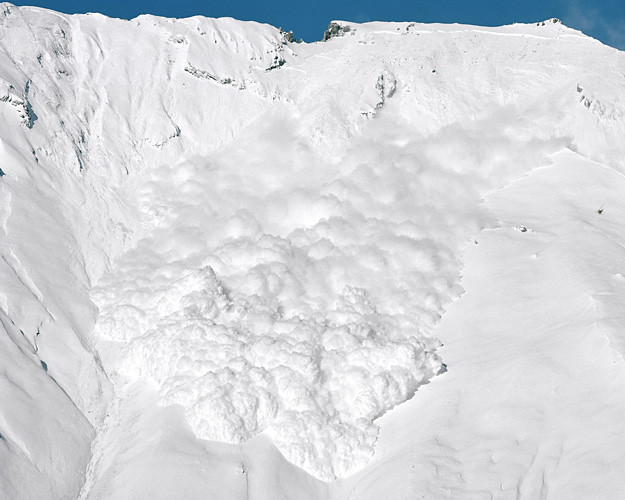 TThis ambiguous standoff between nature and man is further complicated by the question of ownership: who owns the photographs, the avalanches, the land? Galerie 22bis’s Hugo Pozzo di Borgio, one of Gross’s gallery owners, told me that the primary buyers of Gross’s Lavina pictures are people who live in resort towns near the locations of the photographs. This brings up yet another dualism: why spend so much money to memorialise a landscape you can see out your window?

On the one hand it seems simple - avalanches are rarely seen, and for the chalet-buying mountain enthusiast the photographs are likely the natural extension of an existent interest. On the other hand, because avalanches are so rare, the act of buying the photographs can also be seen as an attempt to assert ownership over an aspect of the land that is notoriously difficult to own – a paragon of majestic natural strength that remains hidden and unpredictable except to the mountain guide who detonates the dynamite and the rare intrepid photographer. In Gross’s photographs the avalanches have been miniaturised, stilled, captured. But of course, they’re only pictures. 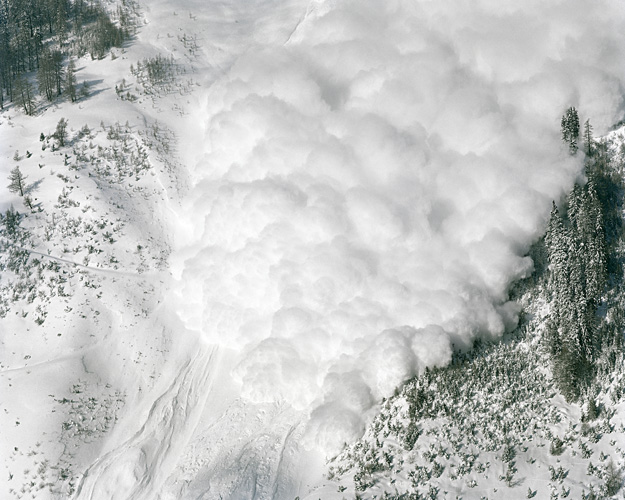 Yet as Gross notes, those who know the mountains well have little desire to own an avalanche, however small. ‘My parents like the series,’ he says, ‘but they would never put it up in their living room. Avalanches are simply too scary.’

It’s available from all good design bookshops and online at the Eye shop. The latest issue, no. 77, has photography and publishing as its main themes – see Eye before you buy for a taste of the contents.