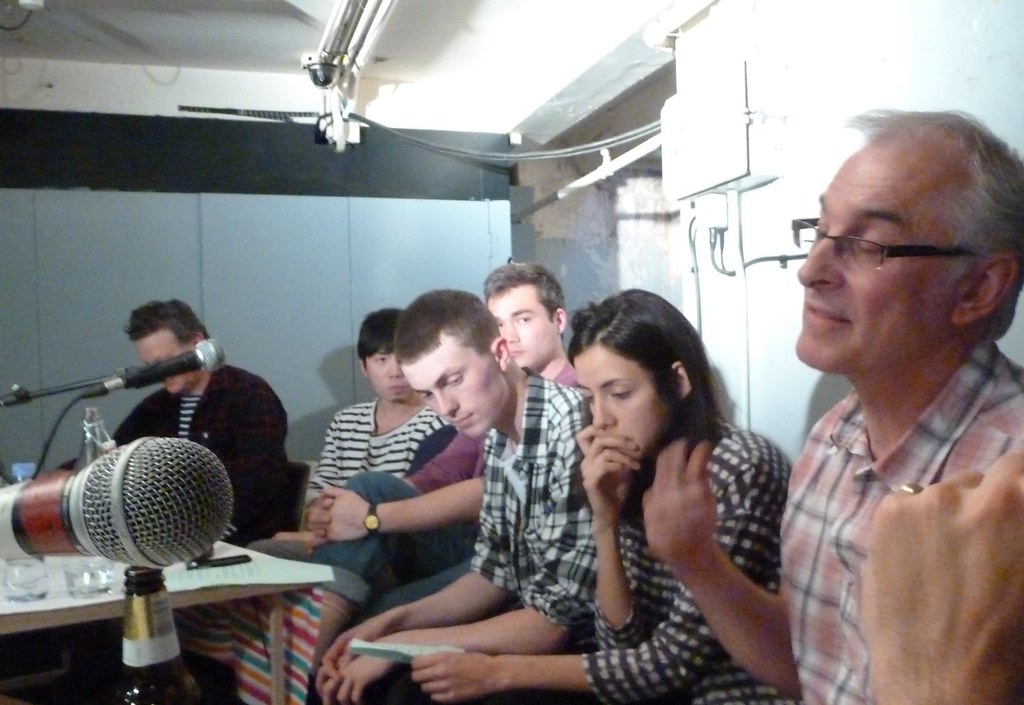 The student protests at University of the Arts, Central Saint Martins (CSM) have highlighted problems with the college’s move to a new site at King’s Cross (KX) and the relocation of certain print facilities to the Byam Shaw building in Archway, three miles north of the new campus.

This is a shortened version of a letter Alan Baines, Course Director, BA Hons Graphic Design at CSM, wrote to Jane Rapley, the Head of CSM on 25 February 2011.

The BAGD [BA Graphic Design] Course Management Team would welcome the opportunity to discuss with you the decision to transfer Graphic Communication’s Printmaking & Bookbinding facilities to Archway rather than to KX [King’s Cross].

Last academic year I was surprised to hear from Jonathan [Barratt] (Dean, School of Graphic & Industrial Design) that ‘an executive decision had been taken to remove Intaglio & Relief printing to Byam Shaw’. On 14 February this year colleagues read that facilities for Screenprinting & Bookbinding would, likewise, not be available at KX. At our Course Committee meeting held on the 15 February, the student reps and staff were shocked by the news. Obviously, you will be aware of the student protests in this regard.

I believe that Jonathan has been briefing student reps this week and that he has assured them that the course teams had been fully consulted, which is counter to my understanding of the process. It’s true that we were fully involved in planning our studios, but not the workshops, for which the planning appeared to be the domain of non-academic staff. In the Summer term last year I requested that Malcolm [Johnston, who has been co-ordinating the move] and Jim [Thrower, the chief technician for 2D] show me the plans for the KX 2D & 4D [Film, video etc] workshops, as I had become increasingly alarmed by the absence of information and lack of requests for input. At this time I saw these plans which showed Letterpress [see final note, below], Screenprinting & Bookbinding at KX, but saw nothing for Byam Shaw and have seen nothing since then. I do not consider that the BAGD course team has been fully consulted.

There are convincing intellectual arguments that have not been aired and I would like to ask you to hear these before the final decision is taken. These arguments make a positive contribution to the thinking around provision for both digital and analogue printing / printmaking in particular, but also for photography and 4D, and may indeed, result in a more beneficial outcome for all.

Professional and pedagogic perspectives that only experts and teachers within contemporary graphic practice can offer seem currently to be missing from the decision-making process. Key members of the academic team within illustration, printmaking, design, graphic communication and context have a very clear vision for the subject, which is based on their professional practice, research and work with today’s students.

Current research indicates that contemporary graphic design, notably within new design practices, is concerned with the close proximity of digital to analogue, in terms of one informing the other and their synthesis. This is the preoccupation of the most advanced creative thinkers within graphic communication today. Synthesis can result in outstanding hybridisations that have shifted the subject beyond the homogenised computer-generated style of the 1990s.

‘Only now that the frenzy that followed the start of the digital revolution of the mid 80s is starting to calm down are its true implications beginning to be understood. Some practitioners are becoming aware that because of the ease and speed of digital production, there is a danger of complacency; in general, people are now more equivocal about the benefits of using the computer in graphic design, particularly as a means of creative expression … CSM uses activities such as letterpress, drawing, printmaking and experimental photography as important learning tools to complement computer-based training, encouraging students to feel equally comfortable working on and off the computer … in 2001 [graphics] lecturers at CSM set up The Codex Project. This stemmed from the general concern they felt, both as designers and teachers, for the lack of any real understanding in the predominantly digital age of the ‘physicality’ of the craft of design … the aim – to focus on problems facing graphic design education – in particular the strategies employed by designers in response to the technological revolution. The idea is to encourage students to integrate different processes and to find unique solutions in their use of digital, instead of blindly accepting preordained procedures … the project generated such interest that the debate expanded into debates about the future of design and graphic design education.’

BAGD has invested heavily in digital and at the same time made a considerable effort to maintain and further develop our analogue equipment. In fusing digital with analogue, we offer something that competing courses can’t match. The works seen at our degree shows are the products of hybridising technologies. This gives new currency to the subject, which in turn attracts broad interest from young people who’ve grown up in a totally digital environment, which makes the digital mundane and everyday to them. The BAGD course is evidence of the unique qualities CSM presents to the world.

Extracts from ‘The Pursuit of the Unique in the Digital Era’ – paper given by Andrew Hall at a conference in Sydney, Australia, April 2010:

‘For the applied art student, studying at colleges such as London College of Communication and Camberwell, access to computing equipment and instruction became crucial, and this digital activity was prioritised over analogue-oriented creative activity [1990s]. At Central Saint Martins BA Graphic Design Course, renowned for its innovative approach to Communication Design, a move to the top two floors of the Lethaby Building in Holborn offered a means to facilitate and affect this shift in priority. By chance, the Graphics course was to inherit a space vacated by the now-defunct Fine Art Printmaking Course, which housed many of the discredited analogue printing technologies: Screen printing, Lithography, Etching, Linocut. Since the general perception of these print-related technologies was that they were hopelessly outmoded in relation to the superior new digital technologies, [it was] agreed that this machinery should be dismantled and each former print studio cleared for occupation by students and their computing equipment. However, at the eleventh hour, the Head of College reviewed these plans and insisted that the analogue printing technology should remain. It proved to be a momentous decision. What occurred from this juncture onwards was a wilful and sustained creative fusion of analogue and digital technologies.

By looking at the work of [BAGD] illustration graduates, we can see some of the ways in which the applied artist’s relationship with analogue and digital technologies developed within this ‘dual’ environment. They are part of a new breed of image-maker that has had access to both forms of technology.’

‘Whilst the digital movement is continually evolving and has extensive capabilities, I still think there are certain things about traditional techniques that can’t be replicated or beaten. I find that the digital environment often lacks the charm, soul and integrity, which are often inherent in traditional practices, and, as such, I think it’s the progression of the digital environment that strengthens my favour of hand-made processes. Having said that, I also see the value of using digital aids, and I’m not averse to using them as part of the process, as long as it doesn’t compromise the sincerity of the execution.’

Each of these students was a member and product of the Graphic Design community at Central Saint Martins, a community that facilitates exploration and interplay between both analogue and digital technologies. Though each student had access to the same machinery, as free agents they chose to create innovative and unexpected relationships between these technologies, thereby achieving results that synthesised experimentation into compelling artwork.’

The synthesis of digital and analogue (e.g. printmaking, photography, moving image) and our ability to offer both within the same physical and intellectual space is what makes BAGD so current. This philosophy is a major component in forming our USP, which in turn supports the CSM brand.

It seems however as if in the move to KX it has been assumed that graphic designers only require Apple Macs to be creative. The KX Steering Group may not be aware of the overwhelming need for both analogue and digital workshops to be in close proximity to each other and aligned to our studios.

The interrelationship of our production facilities, currently in extremely close proximity, allows for real-time exploration of emerging design possibilities, which simultaneously can be analogue or digital or digital & analogue. Evidence would indicate that the unexpected direction taken by the KX Steering Group is in danger of running counter to contemporary practice and, indeed, our subject rationale. The deliberate separation of analogue from digital and workshops from studios is not viewed as conducive to sustaining the creative development of CSM graphic communication design in the longer term and indeed could cause serious damage in the short term.

‘Along the way there are several stages of magical transformation that imbue the work with varying layers of intensity. This is why the film image is not only emulsion versus pixels, or light versus electronics, but something deeper – something to do with poetry. Many of us are exhausted from grieving over the dismantling of analogue technologies. Digital is not better than analogue, but it is different. What we are asking for is co-existence … it is in these spaces that a younger generation born in the digital age are taking up analogue mediums in enormous numbers.’

I hope we can meet at your earliest convenience.

Jane Rapley and Jonathan Barratt, Dean of the School of Graphic & Industrial Design, did have a meeting with Alan Baines and a group of his colleagues the following month but their proposal for a small print facility on the main site was turned down. They were told that the letterpress would be based in King’s Cross; however Eye has been assured by the CSM press office that it ‘will move with the rest of the print equipment to the Byam Shaw campus’.

We have just been informed (by Phil Baines, via Malcolm Johnston, head of academic environment) that letterpress (completely irrelevant according to JG above), will be moving to the ‘third floor west side of KX building’ as originally planned (and contrary to correspondence / conversations with the CSM press office, shown in strikethrough above). 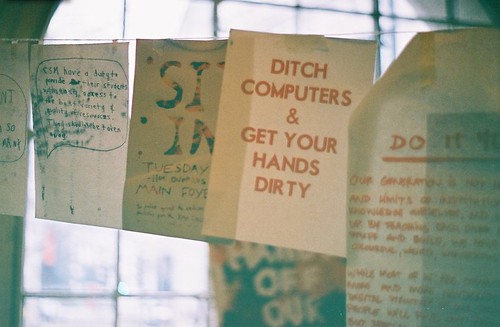