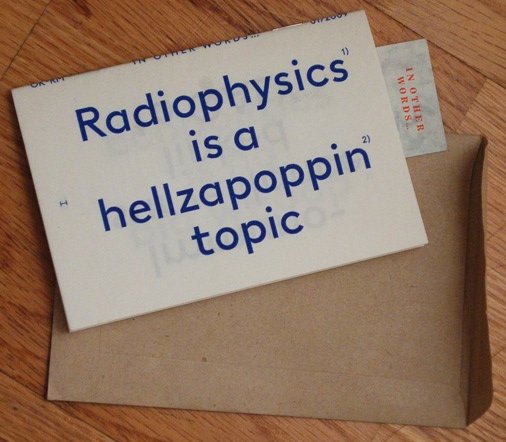 OK-RM’s cumulative new year publication series asks where English culture is, and what it means to be an English graphic designer, writes Jane Cheng. In other words is an eight-page booklet that proposes to use in sentences sixteen of the new words added to or modified by the Oxford English Dictionary (OED) during the past year.

The publication includes the words ‘hellzapoppin’, ‘QALY’ (Quality Adjusted Life Years), ‘ecopolitics’, ‘puttanesca’, ‘big up’, ‘jasms’, ‘Godzone’, and ‘hot swap,’ among others. The ‘sentences’ in which these words are used turn out, however, to be more like newspaper headlines, unpunctuated and for the most part grammatically incomplete: ‘Immunosurveillance linked to QALY’, or ‘A cookie cutter puttanesca’. Following these exercises are a brief article on the history of the OED’s ‘Unregistered Words Committee’ and critical definitions of the aforementioned terms. 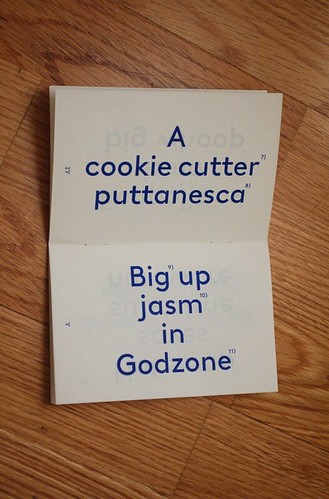 Particularly notable is the diversity of cultures and disciplines from which OK-RM's chosen words derive: America, Italy, the West Indies, New Zealand; science, technology, economics, feminism, and babies (‘blankie’ was apparently added last year). The booklet, on the other hand, is set in Aurèle Sack’s Black, a derivative of the quintessentially English Johnston, and Corona LT Bold Face No. 2, a chronologically appropriate newspaper face. The juxtaposition asks if the endeavour of listing new words, and of ‘exercising’ them, is about inclusion, or rather about the almost colonial endeavour of deeming some words legitimate and others only slang, or temporary, or not English enough. (I would be curious to know what words were considered for this year's dictionary supplement but then not added, and why.) 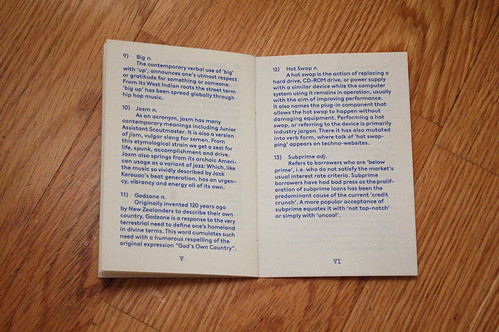 But OK-RM's booklet could never be mistaken for neocolonial. It is small and almost flimsy; the tone of the article is humorous; and AS Black, while slightly formal at such a large size, has an English sort of jolliness. One wonders what the OED's first editor, who is featured in a grainy nineteenth-century photograph, would have looked like uttering ‘Big up jasms in Godzone’.

OK-RM manages thus simultaneously to celebrate and to ridicule. In doing this the designers make clear that their position stands in contrast to that of the Unregistered Words Committee: whereas the latter officiously confers legitimacy on would-be words, the former unobtrusively gives them life, a body, a reality that we can hold easily in our hands. 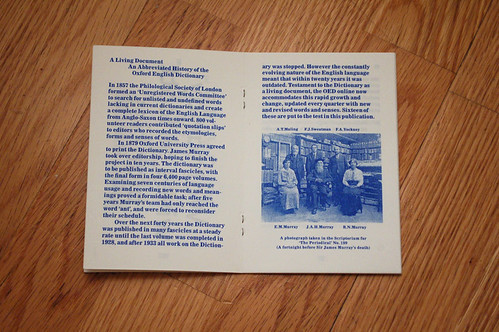 This self-effacing generosity is not just modesty on the part of the designers. Perhaps it goes without saying that the project has grown out of the process of graphic design itself: out of the need to make and maintain contacts, the need to use and manipulate words, the pressure to update, renew, and create, the designer’s self-conscious place in culture - alongside the normal activities of reading, researching, writing, and producing.

As James Goggin wrote in the 2008 Most Beautiful Swiss Books catalogue: ‘…graphic design remains what it has always been: an open-ended discipline where analysis of its everyday activities and tools reveals an inherent scope for a systematic approach to commissioned work and a logical capacity for self-production’. On the other hand, what makes the project interesting is not so much its relationship to process, but this process’s relationship to language, culture, and identity.

The next instalment of the series wil be French-English / English-French. 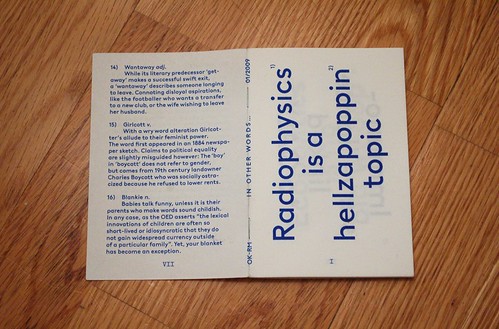