Do posters have much to do with graphic design any more? 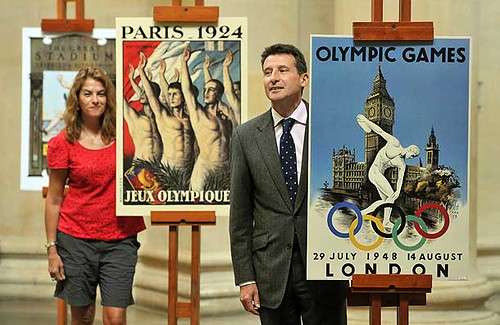 My initial reaction to the news that British artists – rather than graphic designers – would be commissioned to design the official posters of the cultural Olympiad for 2012 was similar to many other graphic designers and design writers: dismay, writes designer Alex Cameron.

I cannot have been alone in offering judgement on the (as yet unrealised) efforts of artists such as Tracey Emin, who, it appears is already being promoted as the ‘poster-girl’ for the event (above, with Lord Coe).

Emin is one of twelve artists who have been commssioned by the London Organising Committee to design a series of posters that will go on sale in the run-up to the main event – an exhibition at Tate Britain next June to celebrate the London 2012 Festival – the finale of the Cultural Olympiad. Alongside Emin’s we will see posters by: Fiona Banner, Michael Craig-Martin, Martin Creed, Anthea Hamilton, Howard Hodgkin, Gary Hume, Sarah Morris, Chris Ofili, Bridget Riley, Bob and Roberta Smith and Rachel Whiteread. Not one graphic designer is on the list.

Graphic design writers and practitioners quickly vented their anger in response to the Olympics news through zines and private blogs (though the Design Council website had no mention of it) and the overwhelming majority displayed a sense of resignation, of an opportunity lost.

The reaction prompted me to consider the importance of the poster among design practitioners and students. Isn’t our contemporary perception of the poster’s potential – and its place in the graphic design arsenal – contradictory?

The ‘post-technological’ generation of graphic design practitioners now coming out of art schools still look to the poster, in times of crisis at least. In ‘Help’, a recent article on the Eye blog, Alexander Ecob asked why the poster was central to campaigns to raise awareness the crisis in Japan. The volume and tone of the online reaction illustrated the depth of feeling, a belief in the power and relevance of the poster among students and young designers.

This seemed very much at odds with the current generation of practitioners. Rick Poynor, in his Critique of posters made for the 2009 London Design Festival, wrote, ‘The first thing they showed, though, is that lack of practice has taken an inevitable, perhaps irreversible toll. Many of these designs aren’t posters by any traditional definition. They are morsels of graphic playfulness stretched unusually large.’

Margaret Timmers, in her book A Century of Olympic Posters argued: ‘For the modern Olympic Games, posters have been a prime means of visual communication since the early part of the century.’ Timmers’ ‘prime means’ illustrates the way the ‘poster’ commission and exhibition for the 2012 Olympic and Paralympic games is a break with the past; the poster has become something quite different. It is not a question of whether it's designed by an artist, graphic designer, or came about through commission or competition. The point for the graphic design industry is that the 2012 Olympic posters are nothing to do with promoting or selling the Games or indeed graphic design in any real sense.

Commissioning fine artists for the 2012 posters is not a return to the Olympic ideal of putting culture at the centre of the Olympics, nor is it a rejection of graphic design per se, but it says that the poster is no longer the preserve of designers. The poster has become an art object with cultural clout but little meaningful relationship with graphic design, either professionally, or commercially.

Of course the poster will still play a role in graphic communication, but one more diminished than in its past – it will never be the communication powerhouse it once was.

See also ‘Photographers overlooked in 2012 Olympics Poster commission’ on the BJP site, for a related discussion.