Paul Davis wakes up in Brighton

Make drawings, shag, drink . . . it makes me think just how short life is. 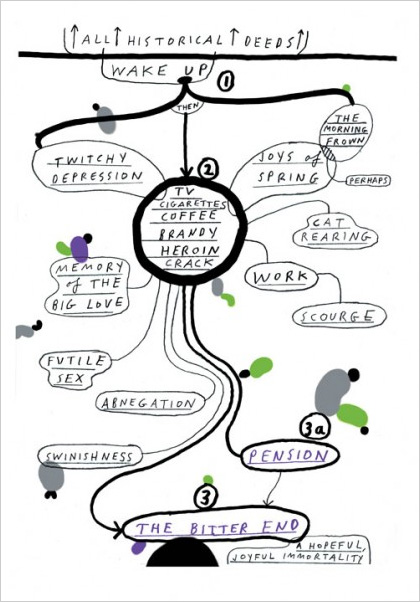 That was at the Private View at Castor + Pollux, right there on the holiday-making seafront at Brighton, with pleasure jostling business for attention. A few days on, revisiting the work, I discover more light among the dark.

Is this a new thing, I ask. Where are his familiar characters; the crouching, naked women and bored IT workers? Putting aside his shaky figure drawings, which perfectly illustrate human vulnerabilities, Davis has gone for the jugular, using simpler means – words, lines, blobs of colour – to achieve unadulterated communication.

‘I’ve always made word drawings, and used diagrams; I’ve got boxes of them at home’, he answers, then goes on to explain his fondness for the Venn Diagram. ‘There’s black on one side, white on the other, and grey in the middle’.

With drawings entitled Eventual deluded failure and A possible childless outlook, the latter a culmination of ‘the last thirteen billion years’, Davis is tackling the big issues; sex, death, morality. ‘As you get older, you want to work things out, “essay” out a point’, he adds. But, he’s also recording the minutiae; Walk to work (below) notes ‘Shit & snot & shit’; while the life of a freelancer is unravelled in Get up, reading like the screenplay of a short film where nothing much happens, ‘… nervously checking emails … watching TV all day …’. 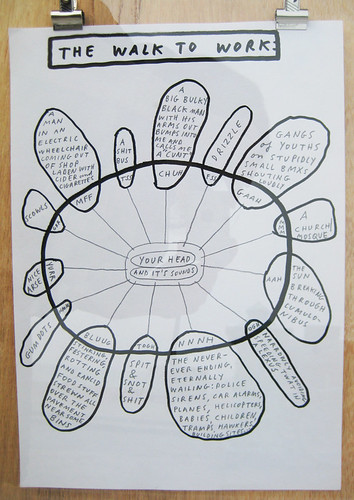 Davis culls these comments, emotions and attitudes from a range of sources, ‘… TV, news, books, on the bus, I just listen to people moaning … life is annoying’. His word play is clever, funny, playfully twisted. Your good self is one drawing, Your good shelves is another; the plan chest in the middle of the page offering cubbies for such deeds as ‘murdering an appalling boss’. This is dark humour, but with a glimmer of a silver lining. 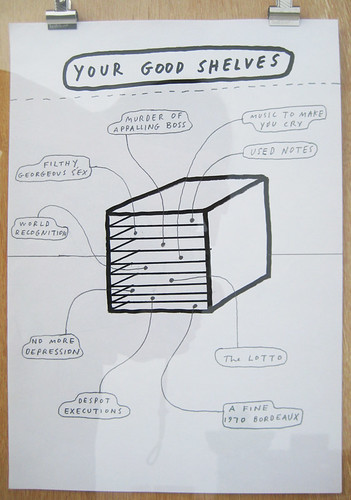 To marshal all these thoughts, Davis adopts a variety of explanatory formations. In Unrelenting problematics, a central lozenge is cut up into compartments, with smaller, linked bubbles floating around, containing differing attitudes and outcomes. In another drawing, opposite extremes are demarcated by horizontal lines at the top and bottom of the page, with arrows denoting upward growth or downward spiral, you choose. Over here, intersecting bubbles, joined by a spaghetti of curly lines, ostensibly link ideas while really complicating issues. Every now and then, colour, ink and paint, make an entrance, either floating, blissfully unaware, or heavily gestured on to the paper in a defiant mood.

Much of this work comments on the need to create, the difficulties of achieving artistic and financial success, alongside deeper emotional happiness; ‘… the most important joy is the joy of making,’ offers Davis. His words and thoughts are here too; not all these stances are ‘collected’.

‘I blame existentialism, and those bastards who made you read it at school.’ To underline his point, Davis launches into the ‘Tomorrow’ speech from Macbeth. ‘I love Shakespeare,’ he adds, ‘… it makes me think just how short life is: make drawings, shag, drink … it kind of makes sense…’ 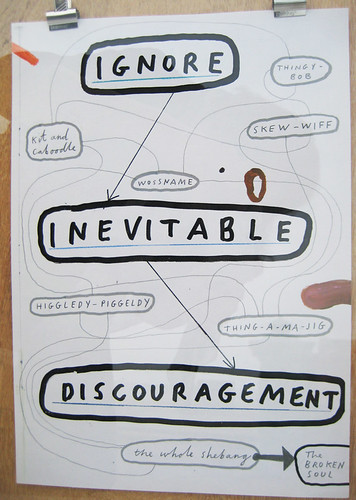 Of all commercial artists, illustrators are the most bound up with the literary world. After all, they’re expected to read the words they illuminate. And, even though he stresses that only ten per cent of his work is illustration, other literary exploits keep him busy: Davis is the Drawings Editor of The Drawbridge, and works alongside Creative Director Stephen Coates (Eye’s founding art director). The quarterly broadsheet, described as ‘in turn, critically nonsensical and radically serious,’ offers essays and images prompted by a changing theme. How do they choose? ‘We (the editorial team) talk about it, go for drinks at Blacks and come up with a word. It’s one word,’ stresses Davis, ‘… it lets people breathe.’

Working beyond the constraints of a commission is what gives Davis room to breathe. ‘I think you have to think,’ he offers, then waits a beat and lets out an easy laugh. 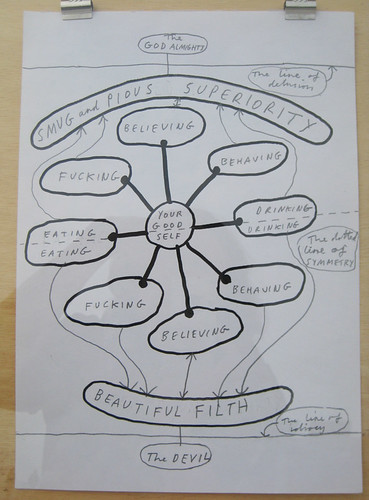 See ‘Looking for clues’ Rick Poynor’s profile of Paul Davis (Eye 55) and ‘Awards madness’ in Eye 69, for which we commissioned Paul Davis to contribute ‘information graphics’ (below). 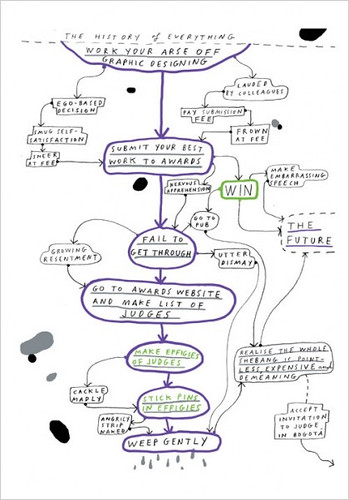