Show me the money 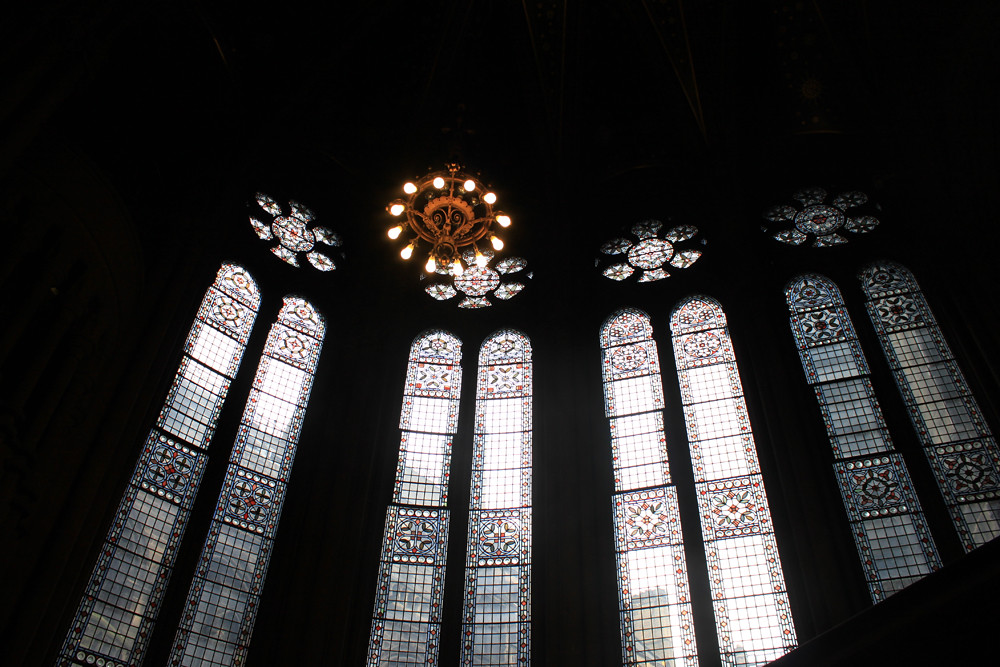 The 2012 Manchester Design Symposium brought together leading thinkers and practitioners to address the theme of The Economic Value of Design in the beautiful gothic Manchester Town Hall, write Matt Edgar and Pam Bowman.

In the wake of the Design Council’s

‘Design for Growth’ Summit, this year’s speakers explored the complex relationship between design and the economy, bringing into question whether the UK’s place at the top table of world design is under threat as emerging economies invest more in their ‘knowledge economy’ – and whether design and innovation has the potential to power the UK out of a recession. 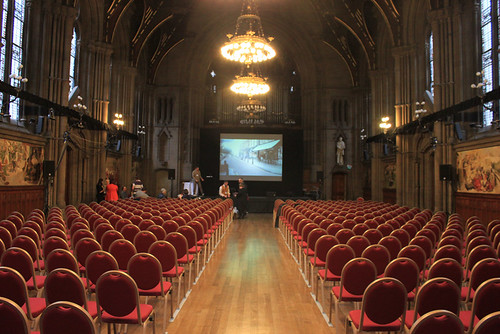 The economic value of design is a topic that designers rarely talk about: they are often more comfortable talking about their own practice, relationships with clients or the ethical / environmental impact of their work. Though a number of speakers went ‘off brief’ and didn’t always address the theme head on, they all presented work that demonstrated sustainable economic models across a wide range of local and global contexts. 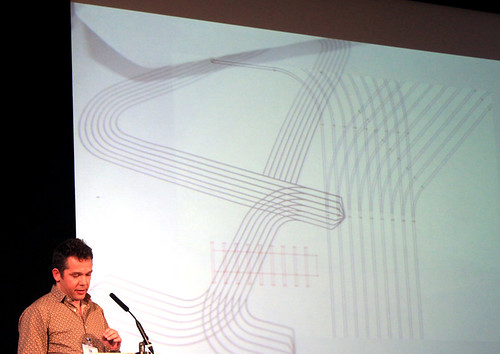 Jason Smith (above) of Fontsmith presented his ‘ten years in typedesign’, talking through the development of work, for and with clients, independent projects, his role within the company and how it has changed from a single designer to a team of alumni from the MA Type Design at the University of Reading. Jason says he spends a lot of time ‘pointing’ but still revels in the drawing stage of the design process.

The project is in support of the teenage cancer trust and contributors span musicians, artists, poets and writers, including Stephen Fry. Kirkwood gave an emotional presentation that will certainly generate further support for the project and the charity.

The last speaker of part one was Morag Myerscough (above), an engaging speaker who cannot fail to inspire. Myerscough’s Studio Myerscough is an example of an outfit that can continue doing useful and exciting projects by staying small. ‘I set up in the last recession so I’m used to having no money.’

Morag maintains control of the creative input and financial output by being able to make and build much of what she designs. She states ‘I use the computer all the time but I really love making.’ ‘For the last ten years I’ve done exactly what I believe in and I still make money.’ Her work with architects is well known, in particular her school projects that have made a measurable difference to the pupils’ wellbeing. ‘I like making places for people that they can own themselves’. Morag, as a speaker makes you feel that anything is possible and that you should just go and do it (see ‘In the thick of it’, Eye 79).

Will Hudson (above) of It’s Nice That has an interesting business model, championing and publishing designers and illustrators via its magazine and website alongside its newly named in-house production studio INT works (see ‘The new breed’, Eye 82). What started as a graduation project has blossomed into a business that employs fourteen staff who are split between publishing, led by Will, and production, led by fellow director, Alex Bec.

Will mentioned the responsibility that comes with employing others in maintaining work to support their livelihoods. He thinks it’s an exciting time both for print and also live design events, which promote an emotional engagement around the discipline. He showed a selection of work promoted by his site adding ‘I’ve become a pointer’. Two examples he pointed to particularly stood out and demonstrated how design can add value on many levels. The first was ‘Fresh Guacamole’ a short stop-motion film by PES that attracted 3.5 million hits on YouTube in its first week online and Massoud Hassani’s Mine Kafon, a wind-powered anti-landmine device. 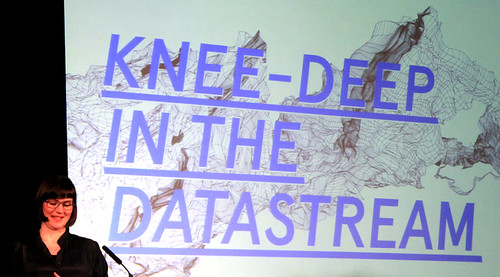 Next (above) was Vera-Maria Glahn of Field, (see ‘10,000 one offs’, Eye 80), a digital art and graphic design studio that employs generative computational design and interactive technology for global brands and cultural institutions. The focus here was about harnessing new technology and creative code to explore new aesthetics and identity systems in flux; what she termed shifting behavioural identities. An example of this was the work they had done in collaboration with Matt Pyke (Universal Everything) and composer Simon Pyke called ‘Communion’, where hundreds of simple skeletal generative creatures were brought dancing to life by simple algorithms. It was a glimpse into how future identities might look and behave. 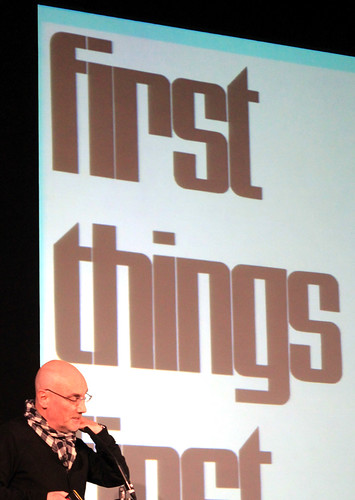 His suggestion was that times have changed enormously and there is currently, a plethora of roles that a graphic designer can fulfil, that have an enormous number of titles and skills attached to them. In a recent article, ‘When less really does mean less’, (Design Observer), Shaughnessy discussed taking a big drop in fees for a job that had, in previous years, cost the client ten times the current budget, to much disapproving comment from DO’s readership. He argued that the model has changed and that we must accept and reposition ourselves to sustain businesses through a much leaner times. 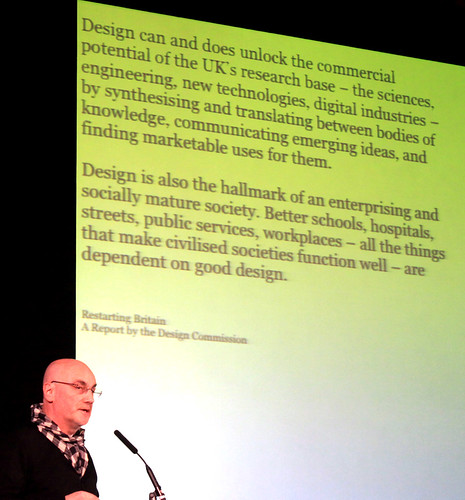 Shaughnessy referred to the report ‘Restarting Britain: Design Education and Growth’ by the Design Commission, which he described as an important and timely document, emphasising design’s ability to be a force for positive change. The report calls for a government-led national design strategy, support and protection for Higher Education centres of excellence, expanded routes out of education into the sector and a rethinking of how design operates in schools.

Malcolm Garrett then joined all of the speakers on stage to conclude the event in a panel discussion (above) chaired by Professor David Crow, who summarised several key themes that ran through the symposium: collaboration, ethics, strategy and entrepreneurship.

Garrett said it was vital that there be better connections between design and the wider business community and that there must be broader discussions around the economic value of design. Shaughnessy agreed and warned that our Achilles heel can be that we judge on taste, that there was the need for a stronger theoretical underpinning to our work and a transparency to how design decisions are made.

The panel voiced a need for a figure that could articulate the value of design to a mass audience through the media as Brian Cox has done for the sciences, someone who could inspire and communicate why it matters. This led the discussion back to the Design Commission’s report that Shaughnessy had referred to above and the question as to why we wait until Higher Education before learning about design and communication?

Garrett added that this was increasingly important as the barriers for entry into design are disappearing with increased polarisation and democratisation being a good thing with designers becoming more empowered by not having to rely on larger institutions to craft cultural change. ‘Cutting out the Saatchis’ was the expression used – a consensus that the middle man may not be needed any more, a sector where designers are ‘versatilists.’ Garrett advised; ‘Be a jack of all trades and the master of at least one.’ 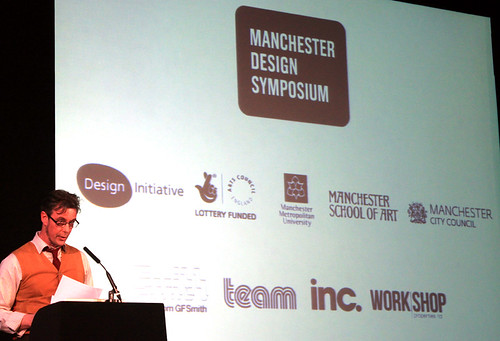 Above: Professor David Crow thanks the sponsors.