Back with a flourish #5. Christian Schwartz on swaggering swashes 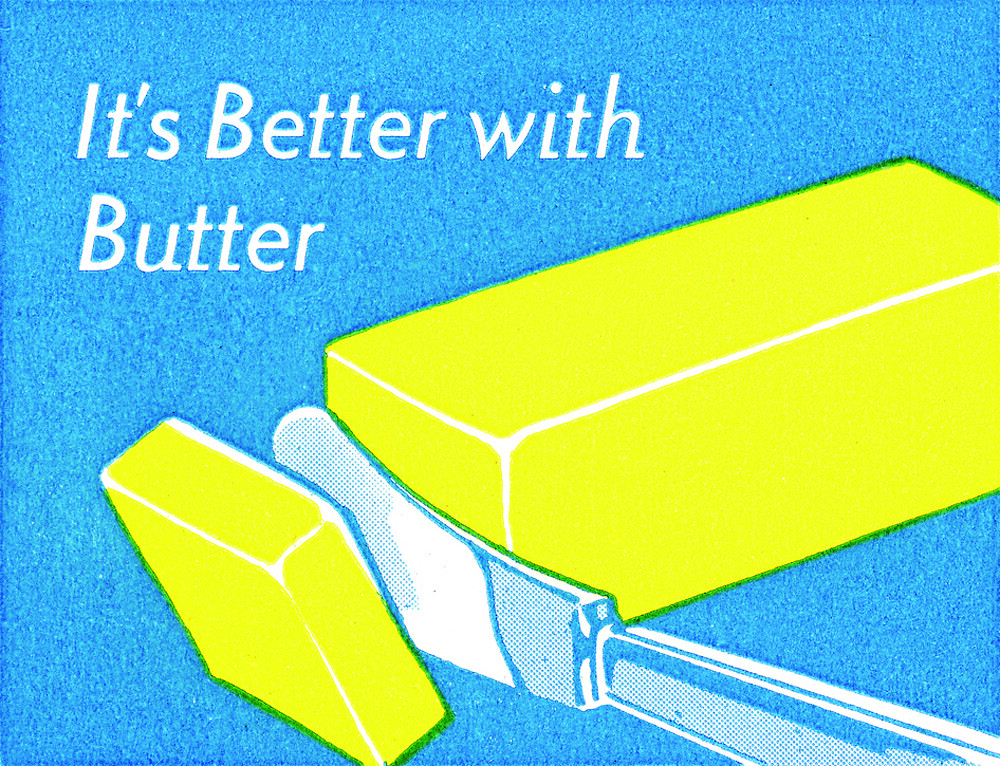 In this final extract from ‘Back with a flourish’ from Eye 62, Christian Schwartz examines some further examples of typographic embellishment.

From a Figgins fatface to a ‘bizarre case of typographic transvestism’.

As display type got bigger, louder, and heavier in the nineteenth century, Figgins and many of his contemporaries added a limited set of swash characters to their Modern italics – generally just ‘A’, ‘J’, ‘K’, ‘M’, ‘N’, ‘T’, ‘V’, ‘W’ and ‘Y’. These give the type character without drawing an undue amount of attention to it. The ball terminals connect the forms to the lowercase (almost like the biforms popularised in the 1960s, such as Bradbury Thompson’s Alphabet 26, but not as literal), and make the caps look fresh and contemporary, even today.

In the 1920s and 1930s, American Type Founders rediscovered Renaissance-era swashes while reviving classic typefaces such as Garamond and reworking them for American tastes. They went overboard, just like Photo-Lettering, Inc would 40 years later. Some of these sets of swashes, such as ATF Garamond, were tastefully done. Others, like the ones they added to ATF Baskerville, were ludicrous. Perhaps this was a response to demand from the American market, or it may have been a way to sell additions to popular typefaces to unsuspecting printers. In any case, many of the ATF swash caps are suspiciously similar to each other. 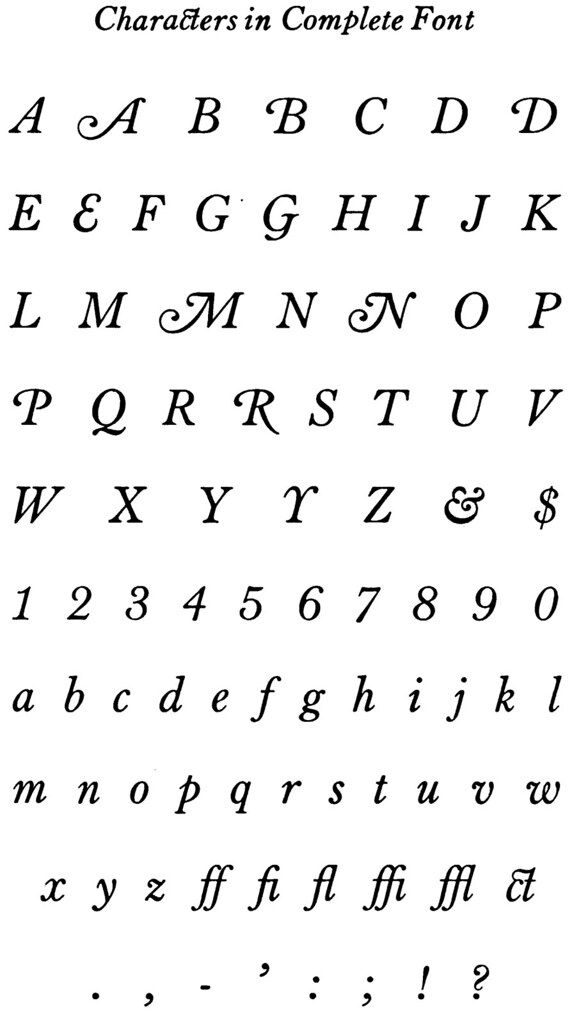 In a bizarre case of typographic transvestism, swash caps for Cloister (below), based on Venetian Oldstyles from the fifteenth century, and Baskerville, based on British Transitional faces from the eighteenth century, are almost identical in underlying structure, which appear to have been borrowed from ATF Caslon No. 410. 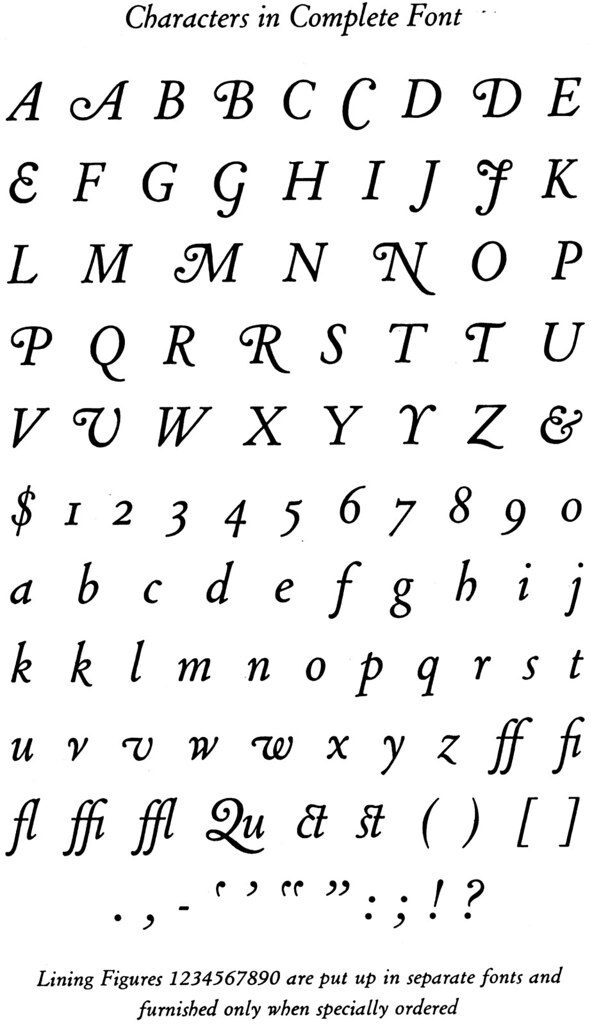 This overheated style reached its most humorous point in the early 1940s. After Futura’s popularity exploded in the US, the major foundries raced to produce clones in varying degrees of faithfulness. Ludlow’s Tempo was fairly accurate in its romans, but the italics worked hard – maybe too hard – to differentiate themselves from their source and the other clones.

The tails on the lowercase are very clever in the way they differentiate italic from roman in text (in fact, I ‘borrowed’ them when I designed Neutraface in 2002) but the swash caps are unconvincing, drawing undue attention to themselves in the fake ad for butter in the specimen book. Around 1967, Phil Martin’s Helvetica Flair would push this idea several steps further. 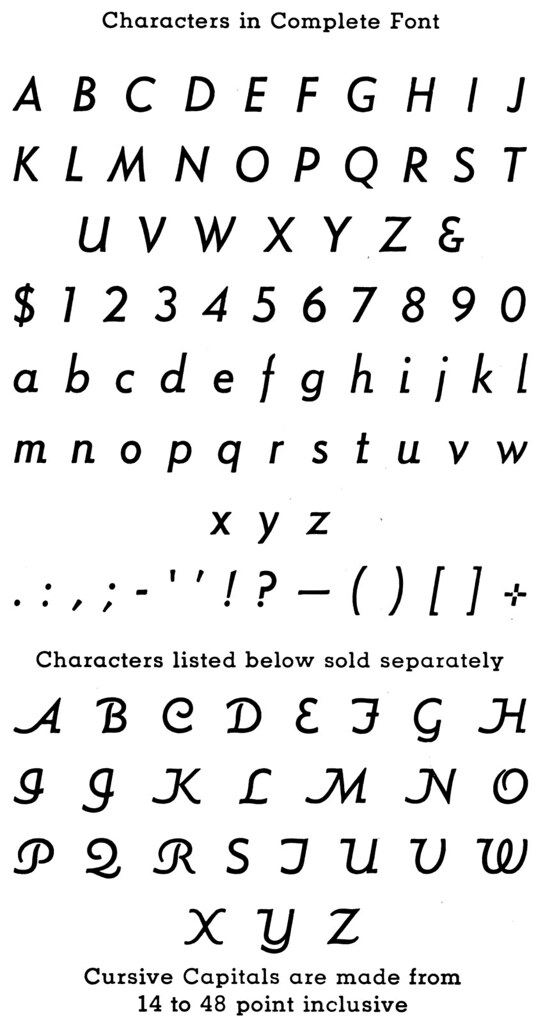 Eye 62, which features ‘Back with a flourish’, is still available (just) from the back issues department.