Jan Middendorp blogs for Eye – direct from the ‘pregnant oyster’ 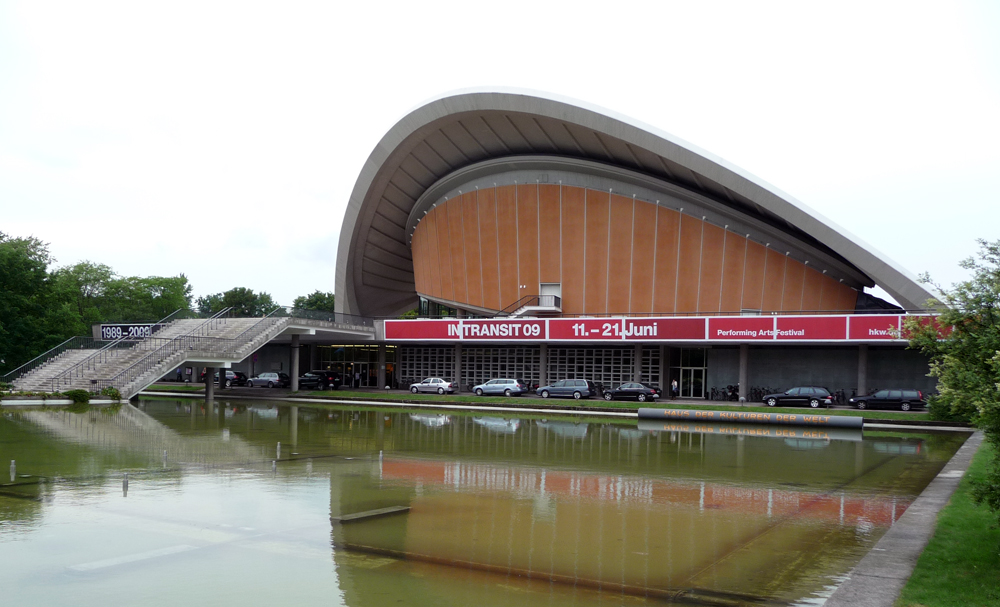 The venue is fantastic. Dubbed ‘the pregnant oyster’, the Kongresshalle was a gift from the Americans to (West) Berlin, built in 1956 under the direction of architect Hugh Stubbins. Having collapsed under the optimism of its construction in 1980, it was rebuilt in subsequent years and became the ‘Haus der Kulturen der Welt’, the House of World Cultures.

This year marks the twelfth time this splendid building has been home to TypoBerlin, a conference about graphic design and related matters organised by FontShop Germany. What was originally an event about new developments in type design has become distinctly multi-disciplinary, with each year’s theme (Music, Image, Change, etc.) hinting at the directions in which boundaries may be crossed. The theme of this year’s event (the fourteenth) was Space. Next year’s will be Lust. With more than 1200 visitors from sixteen countries, TypoBerlin has become Europe’s largest annual design conference. (According to Stefan Sagmeister, it’s also the world’s best.)

One of the challenges of curating a themed conference is to come up with just the right keynote speaker. The ideal is to find an outsider with a story that is powerful enough to make designer jaws drop. And so, the Typo team decided to look beyond design-related notions of space, and travel to outer space.

What sounded splendid on paper – Esther Dyson, an internet and angel investment opinion leader, telling tales about her recent cosmonaut training as ‘backup’ for a rich client, one of the world’s first space tourists – became something of a disappointment, as Mrs Dyson browsed her Flickr album of Siberian snapshots while insisting on telling us the names of every astronaut or technician that crossed her path at Russia’s Star City space centre.

She is obviously a fascinating person as well as a businesswoman with a heart. However she seemed too nervous about being thrown to the typographers, a species that must have been new to her, to exert her communicative powers to full effect. (Is there such as thing as a design conference coach? Could be a great niche occupation.)

After the opening speech, TypoBerlin became a four-track event, with three smaller spaces besides the 1000-plus seat main hall, so everyone’s experience of the conference is a different one.

We missed a workshop (fully booked) by Dutch type designers Erik van Blokland and Paul van der Laan, who practised calligraphy with the world’s largest pointed pen. We saw another Dutch master of letters, Gerard Unger, deliver a lecture on lettering projects in public spaces with his characteristic sense of understatement.

And we were pleasantly surprised by the Anschläge, a Berlin design collective that excels in subtly subversive activism. Their work proves that, yes, graphic designers can help make the world a better place if they roll up their sleeves and try making a difference instead of just making things look nice to please the client. 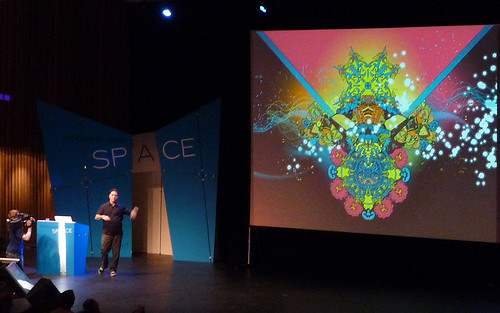 But the high point of Day One was a highly entertaining lecture by Joshua Davis (above), a pioneer in the realm of computer-generated ‘Dynamic Abstraction’. Davis, who works for clients as well as presenting autonomous art in galleries and public spaces, sets himself a theme for each year and, having been invited to TypoBerlin last autumn, decided on ‘space’ for 2009. Not only did he show one breathtakingly beautiful 3D-image after another, he also presented his stuff with boyish enthusiasm, a great sense of humour, perfect timing and showmanship.

Having spent part of the morning at the computer screen, your correspondent now has to hurry back to the pregnant oyster, where Day Two has already started.