Extinction Rebellion has grabbed the world’s attention with its imaginative, disciplined and urgent approach to graphic activism 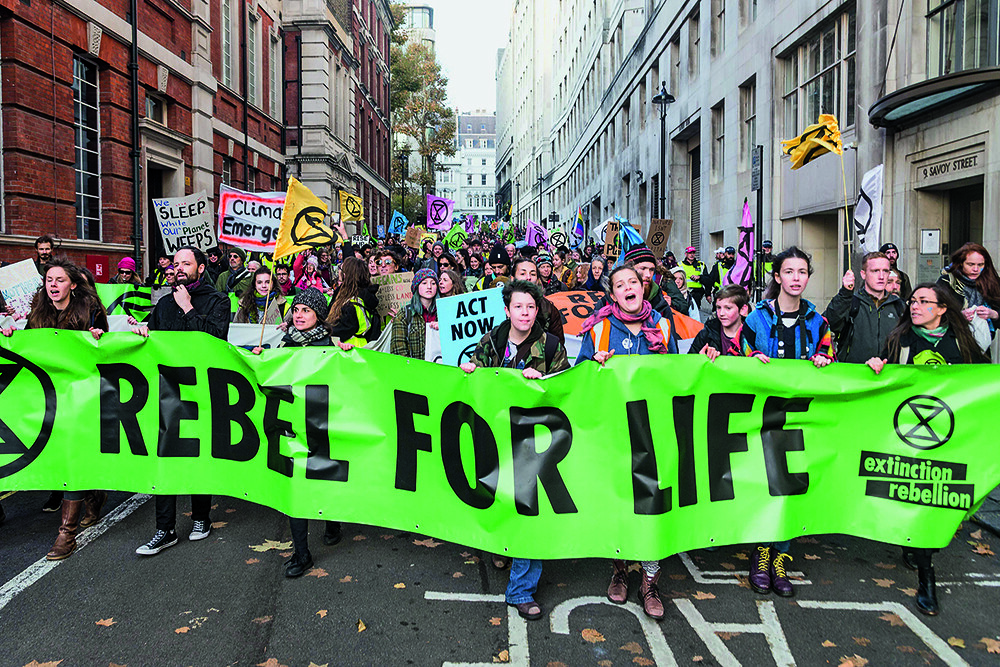 ‘We’re like a start-up. We’re in 75 countries,’ says William Skeaping of Extinction Rebellion (XR). It is February 2020 and he is addressing a design gathering at the invitation of Pentagram partner Marina Willer. Skeaping, XR’s ‘creative strategist’ and editor of This is Not a Drill, XR’s book, pulls no punches: ‘This is our problem. We have begun Earth’s first mass extermination.’

XR’s rapid growth has been aided by a visual identity –expertly guided by XR Art Group – that is based around a few simple elements: the ‘hourglass’ symbol made by street artist ESP in 2011; the typefaces Fucxed Caps and Crimson; and strong, often fluorescent colours. XR Art Group’s Charlie Waterhouse says: ‘We couldn’t be just green. We’re not an environmental movement, we’re a movement for change.’

The results are polished, powerful and sincere. As fashion designer Clare Farrell and illustrator Miles Glyn explain in This is Not a Drill, the anarchist DIY traditions of ‘working with your hands and getting them dirty doesn’t mean the outputs should be trashy.’

Waterhouse says: ‘Skulls and skeletons have been an amazing short cut to talking about death … it’s a modern update on the heraldic.’ He adds that Glyn’s linocuts of fish and birds are a constant reminder that we are facing an ecological disaster. XR Art group, which also includes Farrell and graphic designer Clive Russell, credits the success of the identity to the original XR cohort. ‘They were brilliant “clients”,’ says Waterhouse. ‘Completely open-minded – willing and able to take advice and run with things.’ 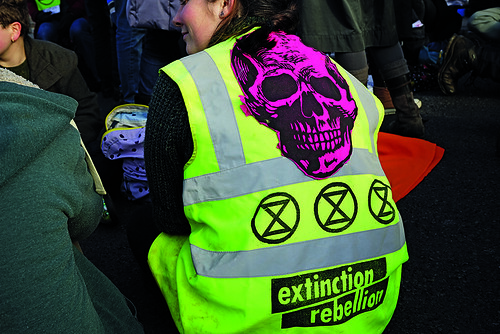 The most important item in their arsenal is the XR Design Guide, which sets out rules (logo / type / colour) together with links to artwork.

‘We gave it away as soon as possible,’ says Waterhouse, ‘with the invitation for people to do what they will with it, and feed back new creations.’ The pdf has been downloaded 9000-plus times worldwide. He adds: ‘An XR campaign in India needs to look like it comes from India. The issue we’re dealing with affects us all. We are united by our common vulnerability.’

Is XR a brand? ‘Branding is used to cover things up,’ says Skeaping. ‘We have a duty to tell the truth.’