Focus on the narrative 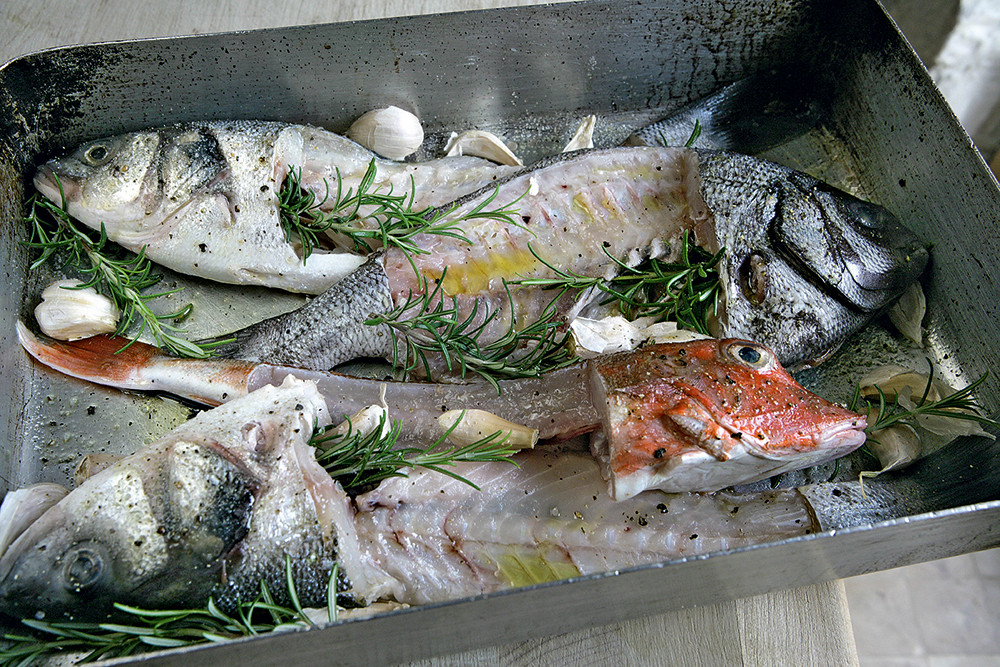 Simon Wheeler has been a highly regarded food photographer since the 1980s, when he started shooting stories for food magazines and the Sunday supplements in the UK. Although originally from Dublin, he learned his trade in a busy photographic studio in London where he worked on advertising campaigns for, among others, Harrods, Swatch, Dunhill and Range Rover, as well as on editorial for magazines including House and Garden (both British and US editions), The World of Interiors, Elle, Condé Nast Traveller and Vogue.

The bulk of Wheeler’s early work was studio-based, technically precise, still life. But after a number of years he opted for a more immediate ‘in the moment’ approach with pictures that could tell a story. He says, ‘You try to get together with the person you’re working with and think, “How can I best tell this story?”.’

He also believes that ‘humour definitely has its place’ in the world of photography.

Wheeler’s books include the popular River Cottage Cookbook by Hugh Fearnley-Whittingstall and In Search of Perfection by Heston Blumenthal. More recent titles include Cured, by Lindy Wildsmith, about methods of preserving food from salting to potting to pickling, Charred and Scruffed by Adam Perry Lang and River Cottage Fruit Every Day! His latest books are Abundance by Alys Fowler and In One Pot by Blanche Vaughan.

Spaghetti with lemon and garlic. Photograph from In One Pot by Blanche Vaughan, published by Ebury 2013. Wheeler says: ‘One of the things I’ve tried to do in food photography is to inject a little action. This is taken in a moment of pretty light in one of the many rooms we used to shoot the book.’
Top: picture taken in natural light and used as a spread to open the ‘Fish thrift and standbys’, a chapter in The River Cottage Fish Book, Bloomsbury, 2007. 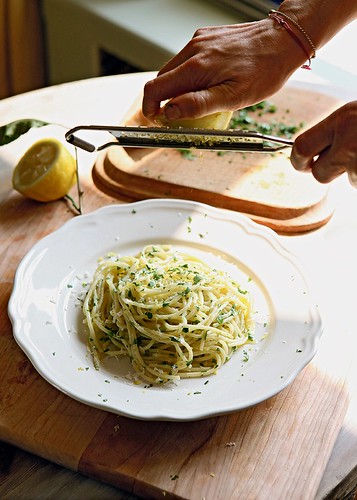 Richard Krzyzak: How did you get into food photography?

Simon Wheeler: By chance really. It was a natural progression from still life. The obsession of the British public with food meant that magazines were featuring more pages on the subject. They needed photographers to help illustrate the features, so they gave me a whirl. Also, a number of decent food magazines started up in the mid-1980s, and the Sunday supplements were all shooting food stories.

I was against the ‘food on a pedestal’ approach, which was fashionable at that time, so slowly I did my own thing.

RK: Were there any particular photographers that you admired?

RK: How did you find your voice?

SW: Well, part of it was to do with not wanting to go around with tons of equipment and an assistant. So I used a 35mm camera, natural light and high-speed negative film. This meant I could take pictures of more or less anything on the spur of the moment. I was less interested in technical perfection and more interested in the spirit of the thing. So I became focused on the narrative, and not on the perfect picture.

RK: How did you make the journey from studio work to reportage?

SW: In the late 1980s there was a sudden a change of direction. Studios became unfashionable, and it was all about location and a more natural image. I became part of this new movement, as I was always interested in the snapshot anyway. It’s what photography does best. You can’t do that in a drawing, painting or film – that moment, that split second, frozen in time.

RK: Do you work with the same stylists and home economists?

SW: No, I don’t mind who I work with. I style all the River Cottage books myself with things I’ve collected over the years. I want it to look ‘ordinary’ in terms of the props, to use things that anybody might have in their cupboard – a mix of new and old, nothing from prop shops. The hope is that your eye will go to the food.

But this is easier said than done. Sometimes I’m made to use a plate or a glass I don’t like, or sometimes I choose the wrong thing myself, and I can’t look at the picture in the end. But then I remember that there are more important things in life!

RK: How did the relationships with chefs come about?

SW: Michael Dover, from Weidenfeld and Nicolson publishers, asked me to work with Tamasin Day-Lewis on West of Ireland Summers: A Cookbook. Tamasin and I are both Irish, and we shot it around her little cottage near Leenaun. It was about her childhood memories and her favourite foods, and I used a Minox with print film. This was the time when I gave up medium-format cameras. I liked making prints because it was possible to tweek and twist a picture in the darkroom – rather basic and crude and massively time-consuming, but I liked it.

Later Richard Atkinson, then commissioning editor of Conran, asked me to work with Monty and Sarah Don on their book Fork to Fork. Richard liked my approach and a year later, when he was at Hodder & Stoughton, he introduced me to Hugh Fearnley-Whittingstall and we worked on the first River Cottage book, The River Cottage Cookbook. Then, when Richard moved to Bloomsbury Publishing, where he is now, he suggested that I work with Heston Blumenthal on In Search of Perfection. And so it went on from there.

RK: What involvement did those two chefs have in your work?

SW: Of course Hugh and Heston are opposites in their work, but they are both uncompromising in what they do. They both trusted me and let me do my own thing, but they were very particular about the finished product. Heston’s book was difficult because I had to jump on a plane at the last minute and go to New York or Milan to join him when he was filming for the BBC. I worked around the camera team and grabbed what I could.

The River Cottage Cookbook was easier because I just shadowed Hugh wherever he went and took pictures. We got up to all sorts of mischief and the book was a huge success. I mean, a few years earlier I don’t think we could of got away with showing a cuttle fish being gutted in a bath, or a rabbit being skinned in all its glory, or a whole pig’s ear shown on a plate with tartar sauce over a double page. The book won every award going.

SW: No, it’s pretty much more of the same – although I do have some ideas to change the approach, so we’ll see. Food photography can be very limiting. Unlike fashion, you can’t shoot it in black and white, make it go blue, or show it out of focus. If the dish doesn’t look like something you’d want to eat, then you’ve failed.

Of course there are always exceptions, but generally this is the case. I work in many other areas too, and I’ve only scratched the surface of my interests. My children have all got jobs now, so there are no excuses!

One of 210 pictures used in The River Cottage Year, by Hugh Fearnley-Whittingstall, published by Hodder & Stoughton in 2005. ‘I still have no idea what Hugh is doing to the goose,’ says Wheeler. ‘This book was my most cinematic approach to still pictures.’ 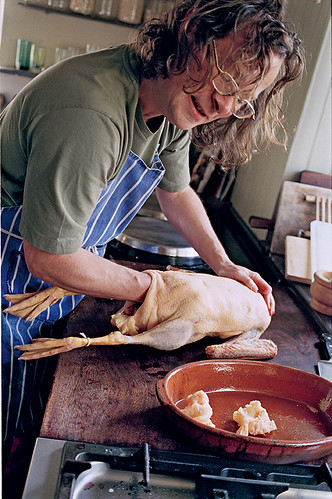