The hand-made work of Le Gun finds expression through parties, installations, a website and a big ’zine 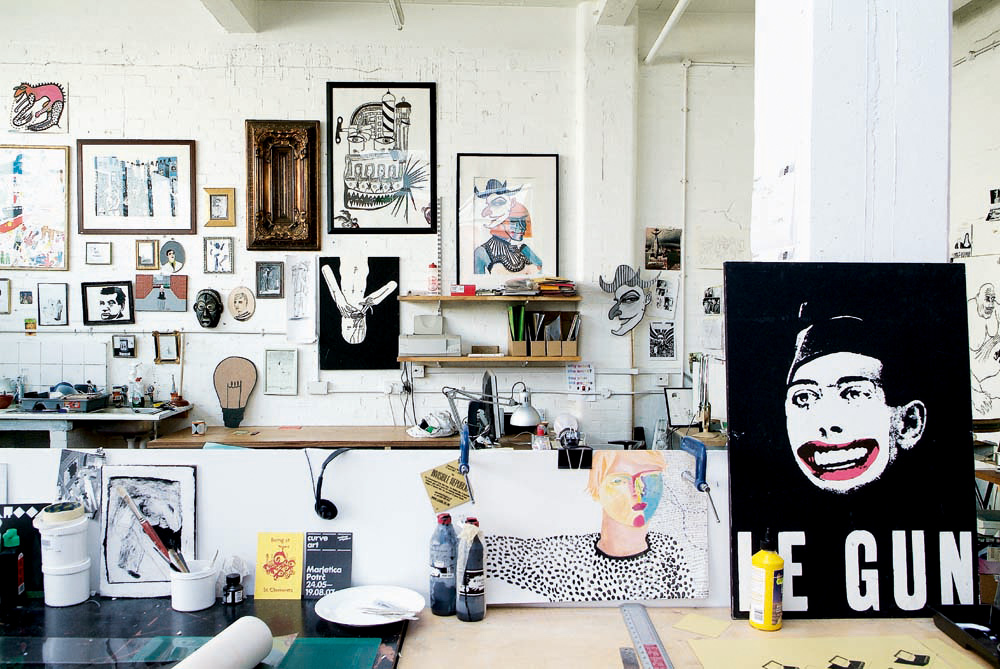 The tendency for young artists and designers to form themselves into creative collectives has a long and fruitful history. The incentives are many and various: sharing resources and a common vision; mutual support and promotion; sometimes just somewhere to go when it’s cold. They can be fiercely creative, precarious, inspirational, delusional and sometimes seminal, but rarely profitable; occasionally destined for greatness but more often unsung and short-lived, they are in many ways the garage bands of the image world.

One recent manifestation of this tradition is Le Gun, a loose and extended group of graduates emerging from the amiably feral melting pot of the Royal College of Art’s department of Communication Art and Design, where a spirit of self-directed experimentation and collaboration across the disciplines of illustration, graphic design and moving image seems to foster the development of such groups. Le Gun came together in 2004 to produce the magazine of the same name. At the group’s core are the magazine’s editors and designers – Neal Fox, Chris Bianchi, Alex Wright, Matthew Appleton, Bill Bragg and Robert Greene – but from their shared studio in east London they continue to diversify. They have installed an old electric letterpress and have been collaborating in a range of projects including exhibitions, installations, animation, publications, broadcasts, performances and parties. 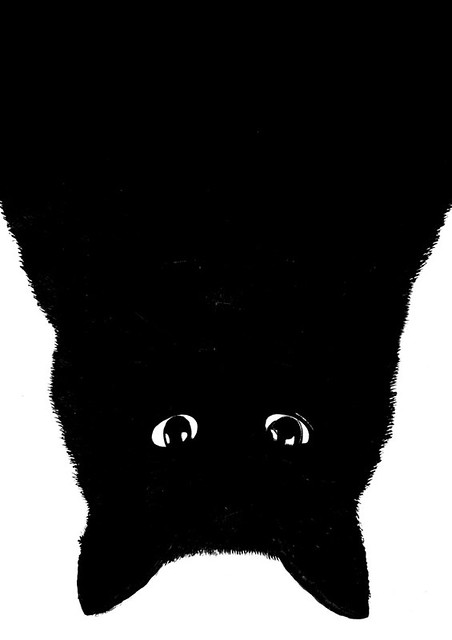 Originally conceived to raise funds and publicise the magazine, these events often involve members of the group and others working together to produce live music, performance, dance and large-scale communally executed drawings and murals. They are like a kind of ‘physical magazine that brings the disparate interests and talents of the individuals in the group together,’ says Fox. ‘Illustrators can be very much inhabitants of their own interior world, so by doing this, all our interior worlds can merge together in this great cauldron.’ This spirit was much in evidence at the ‘Invisible Republic’ party thrown recently for friends and contributors. After a wait in a dark car park behind a snooker hall in Bethnal Green, those able to gain admittance (who knew the password ‘Bob’) were escorted in a creaking freight elevator to the fourth floor, a crowded warehouse bedecked with the group’s trademark monochrome paintings and throbbing to the sounds of ‘Hungarian disco’ provided by ‘Agaskodo Teliverek’.

I spent much of the night manning a makeshift cloakroom, alongside a camel-coated Chas Smash (of the group Madness), a bottle of vodka and a canister of laughing gas, a situation oddly reminiscent of one of the group’s drawings. In this hallucinatory vein the Le Gun group have been working on ‘Dream Machines’, an evening of live drawings, performance and installations based on the stroboscopic light experiments conducted and documented by Brion Gysin (1916-86) and his American biographer, John Geiger.

Through all their manifestations – Bragg’s textless, sombre Apartment 34 and The Crossing, enigmatic sequences beautifully rendered in pencil that call to mind the films of Jules Dassin and Jean-Pierre Melville; Fox’s lurid, bohemian montages of quasi-mythical debaucheries, where the group’s acknowledged debt to Andrzej Klimowski’s graphic stories is most strikingly seen; Greene’s musical ‘gramocast’, The Rubbish Men; Emma Rendel’s hand-made artist’s books, The Awkwardists and The March of the Dead; communal drawings for Strangeworks’ 2006 gypsy banquet – is an unselfconscious flouting of convention and an ability to construct space both physical and conceptual within which their eccentric worlds can flourish.

A recent example was Planet Le Gun, a collaborative installation at Brighton’s Permanent Gallery in January 2007. This featured a large sphere constructed of seamed panels of corrugated cardboard that all but filled the small gallery, with holes that allowed viewers to peer into the dimly lit interior at a crowded tableau of deranged characters on its communally painted walls. The viewing holes were placed where the figures’ eyes ought to have been, so that, as other viewers circulated, the eyes animated in a knowing fusion of b-movie horror kitsch and end-of-peer attraction, making the visitor at once voyeur and denizen of their fantasy world. Once the exhibition was over, this intricate, hand-crafted artefact was unceremoniously abandoned.

As a group, Le Gun demonstrate many of the apparent contradictions that can make creative collectives such fertile, if volatile, ground. They can be in turns self-aggrandising fantasists, nostalgic for a debauched bohemian London ‘populated by the ghosts of Soho, such as Francis Bacon, William Burroughs and Aleister Crowley’, and egalitarian level-headed Modernists. Disarmingly, if slightly disingenuously, they describe their work as ‘a bit wonky’. Appleton’s ‘guns for hire’ entry on their website says: ‘He can be found fiddling with an extensive and dreary selection of paper samples or playing with a gigantic letterpress across the corridor, but mostly goggling at a screen … He makes websites, books, animations, record sleeves for second-rate and over-hyped kids with synthesisers and ropey trainers and most things in-between.’ I ask him about this and he replies: ‘I quite like my paper samples, in fact we just spent a while recategorising them.’

The magazine itself, now in its third edition, is a forum for experimentation, like forerunners such as Raw, Bazooka (see ‘Shock Tactics’, Eye no. 61 vol. 16), L’Assiette au Beurre and even Archigram. Vehemently uncommercial in its anarchic attitude, eccentric content and affordable price, yet elegantly professional in its design and production, Le Gun blends the punk aesthetics and diy mentality of self-publishing with the professional standards made possible by digital technology.

If it has a discernible visual ideology, it is that it remains consistently non-digital, with a predominant emphasis on hand-made marks. This strategy is not rigid or dogmatic, but intuitive and instinctive; according to Bragg, ‘we have tried to include photography and work made on computers, but it tended to stick out a mile and it just didn’t feel right whenever we included it’.

It is an interesting and refreshing approach that uses digital technology as a tool to facilitate a decidedly non-digital approach. In a similar fashion the group’s website demonstrates an ease and fluency with technology distinctive to this generation. Regularly updated and operating as a mixture of online bulletin board, shop, gallery and employment agency, the Le Gun site demonstrates a sophisticated use of technology without being aesthetically defined by it. It is perhaps this effortless flouting of definition that allows them to operate across so many boundaries without the angst and introspection that preoccupies many practitioners (see ‘What do we call ourselves?’, Agenda, Eye no. 63 vol. 16).

Aiming to provide a forum for ‘the new diversity and vitality emerging in illustration and narrative artwork’, the publication is independent, largely self-funded and operates a policy of open submission that has so far attracted a mixture of contributions from new, unpublished artists and established figures such as Sir Peter Blake, Glen Baxter, Oliver Kugler and Andrzej Klimowski. Loose themes (‘Paris’, ‘The Sea’, ‘Do what thou wilst’) are chosen, and the submissions are then ordered and reordered reductively, intuitively and manually – ‘like a compilation tape’ – on the walls of the studio by the editorial team. The result is an apparently free-form collage of drawings, prints, longer visual narrative sequences and written pieces, all punctuated and balanced by letterpress text quotes drawn from such diverse sources as André Breton’s La Révolution Surrealiste, George Grosz, Hergé’s Captain Haddock and Labour mp Gwyneth Dunwoody’s denunciations of piracy.

The magazine has no page numbers, biographies and accreditation. ‘There was no great concept,’ Appleton says, ‘the pages just looked better without numbers and names. Glen Baxter, Peter Blake and Peter Blegvad all sign their images, but the policy is for work to be kept as clean and as much about the artwork as possible, so the signatures were removed.’ Readers are thus forced to refer to a ‘map’ of wryly captioned thumbnail images in the index section, as texts, images and narrative segue into an anarchic visual poem of styles and stories.

If the magazine has a weakness, it is that while the free association of disparate elements can conjure marvellous and fruitful visual conjunctions, it can veer towards superficiality and an absence of discernible meaning.

Their future plans are to remain independent and ‘non-commercial’ while experimenting with their Stephenson Blake proofing press to create new digital and analogue hybrids. This will move Le Gun into a broader publishing enterprise, producing artists’ books while ‘making the next copy of Le Gun viable’.

Le Gun’s approach works best when the visual form and structural textual content and narratives are conceived as a whole. Some of the attempts to incorporate longer text-based narratives into the predominantly visual schema seem less well resolved. The possibilities and problems these present, together with the tensions created between text as image and text as content, and the need to attract and collaborate with writers are acknowledged within the group. It is possible that such refining could dampen some of their spontaneity but for the moment at least the group’s value lies in its very existence and its cheerfully anarchic spirit of independence and experimentation.