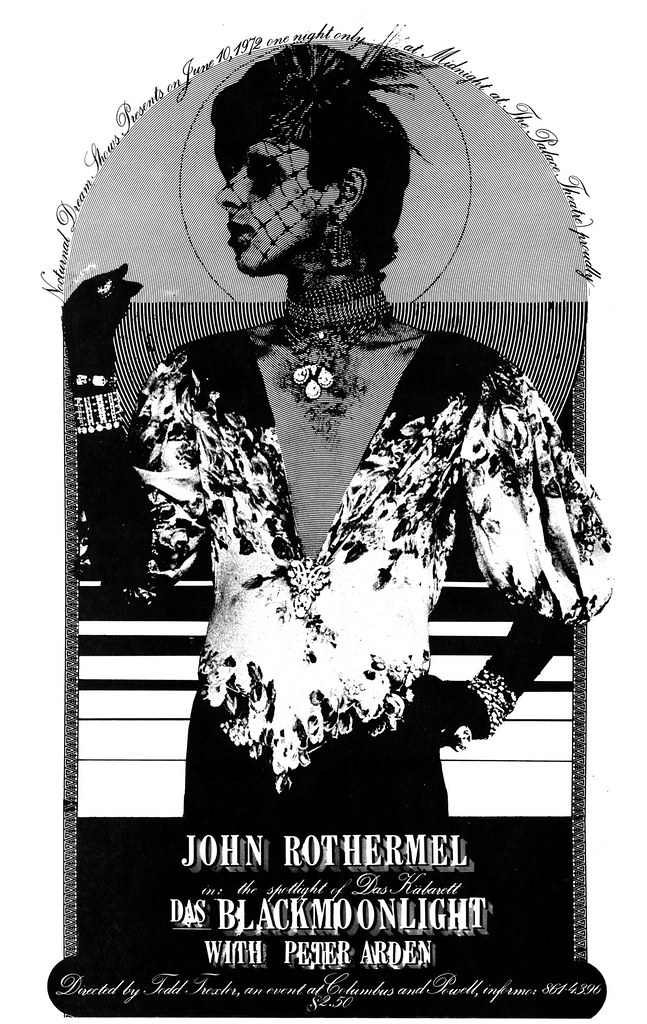 By the time that John Rothermel staged his final performance of Das Black Moonlight at the Palace Theatre on 10 June 1972, drag had become a constant of San Francisco’s gay counterculture. Yet Rothermel’s drag was markedly different from the aesthetic that dominated the city’s glamorous gay venues. Shunning wigs, undergarments and falsies while donning make-up and décolletage that emphasised his angular, unshaven torso, Rothermel was pushing an early form of what came to be known as ‘gender-fuck’. For Rothermel, a celebrated baritone with a taste for the sensational, gender-fuck was parody, an overt androgyny that would help him to pack the house. For gay liberation strategists, roused by the implication that identity could be imitated, accumulated and forsaken, it was a radical brand of sexuality that made exquisite sense.

Das Black Moonlight, a solo cabaret set with a make-believe German pedigree, was one of many in the series of Nocturnal Dream Shows made famous by Rothermel and his fellow members of the gender-bending Cockettes. The poster for Das Black Moonlight, designed by Todd Trexler, features Rothermel standing in elegant profile in the studio of New York photographer Peter Hujar. Like the composite persona Hujar captured, Trexler’s design fluctuates between the real and the imaginary, mixing portraiture with photomechanical abstraction and randomly spaced typography, while allowing the scratches and scrapes of the source material to shine through.

Pasted on top of the other posters and handbills that characterised San Francisco’s thriving underground music scene, this image might have seemed unremarkable. Nevertheless, the poster’s position in design history is necessary, less a milestone of formal innovation than a stumbling block that makes better sense of the shape of things to come: namely, drag’s movement into the public consciousness.

History is a cultural project, a site for the selection and reinforcement of the values that normalise the ideological interests of a particular place and time. Done well, design history can allow for the posthumous representation of difference, reinforcing the range of meanings that a single document or artifact can have for readers past and present. When gay, lesbian and transgender identities are left out of history, their absence tacitly reinforces the belief that heterosexuality is natural and homosexuality strange.

Brought into history, Trexler’s work anticipates the project of queer theory by upsetting the reader’s ability to align this or any other cultural product with an objective identity reference. Authenticity is never certain, the Rothermel poster teases, fucking with gender while disrupting the constancy of history itself.