Brian Griffin, who made management look dark and funny in the 1970s and 80s, turns his lens on rail workers and their bosses 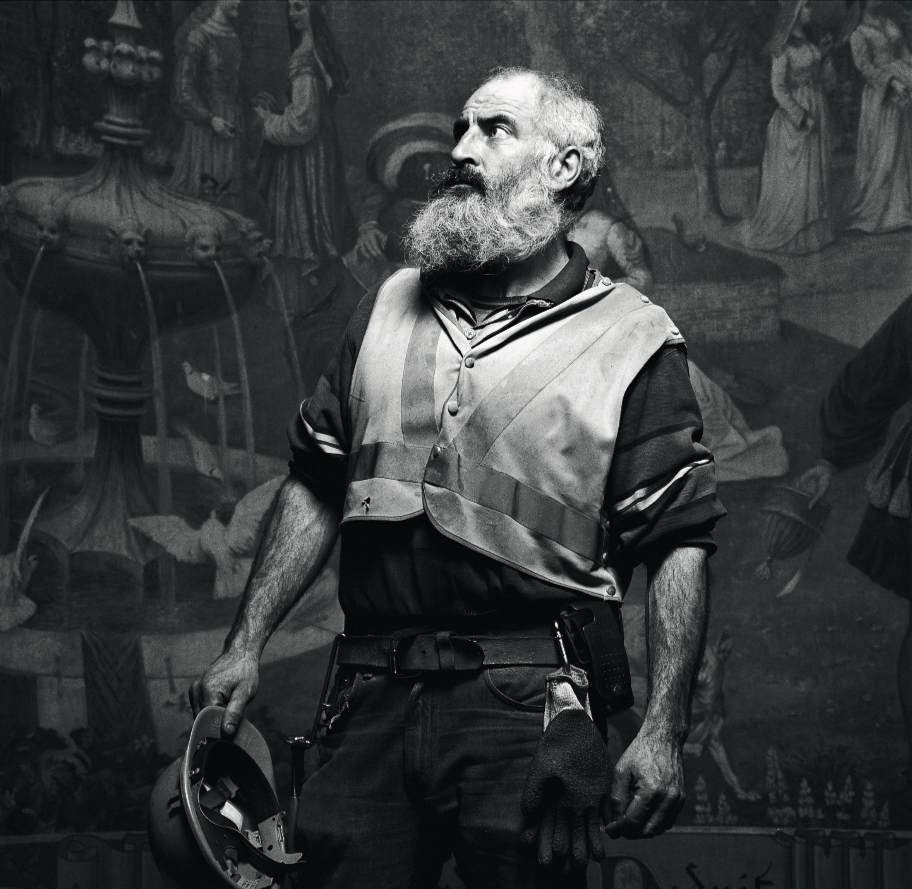 Brian Griffin’s latest photography project is ‘Teamphoto’, an exhibition and book that celebrate the completion of Britain’s first new major railway for 60 years.

The Channel Tunnel Rail Link, now known as High Speed I (HSI), is a thrilling feat of engineering. It has taken nine years to build and includes new track, tunnels, bridges, station developments and the longest-span high-speed rail viaduct in Europe. More than 8000 people worked on the project, and ‘Teamphoto’ sets out to honour them.

It’s an ambitious project, and credit must go to art director Greg Horton of IC2, who convinced London & Continental Railways (LCR) to run with it, and to commission Griffin. However it can’t have been a hard choice. From the early 1970s, working with art director Roland Schenk on Management Today, Griffin created a new visual language for corporate imagery. The Swiss art director had identified the young photographer, fresh from art college, as ‘the new Robert Frank’, and their long commissioning relationship both disciplined and nurtured the photographer. He rarely talks of his career without citing the pivotal role Schenk played.

While still at Manchester Polytechnic Griffin had decided to draw inspiration from a broad visual culture. He observed the potency of Christian iconography and the power of Soviet Constructivism and Surrealist juxtapositions. Classical paintings informed his lighting. He absorbed the dream world of the Belgian Symbolists, and the tension of 1950s American safety films. Schenk introduced him to the rich culture of Mitteleuropa with the novels of Kafka, and the films of Lang and Murnau. Little wonder that Griffin’s corporate world became one of dark narratives, of comedy, and allusion. It was a sophisticated visual interpretation that resonated for art directors seeking a way to represent the corporate landscape of the late Thatcher years.

Ralph Hume, welder. Photo by Brian Griffin.
Top: Liam, steel fixer. Portrait from ‘Teamphoto’, 2007. This was published on the cover of the Sunday Times Magazine, 29 May 2005. 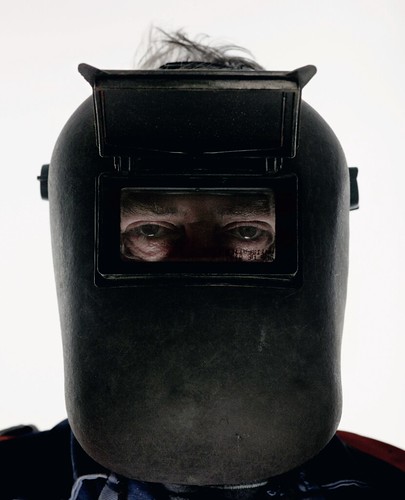 Griffin made many award-winning images for clients in editorial, advertising, design and the music industry. The work he did with the Partners for Hewlett Packard set the annual report world alight but it was a 1986 commission (via Davenport Associates) for Rosehaugh Stanhope, the developers of the Broadgate project in the City of London, that marked the high point of this extraordinarily fecund period. The delighted client offered to fund a further Broadgate project, and Griffin made a series of eight portraits of skilled workers, each as a tomb effigy lying with a saw, drainpipe or drill, the tool of their trade.

He also appeared on BBC2’s The Late Show singing in accompaniment to images from ‘The Big Tie’, another project stemming from Broadgate; he mimed the death of a sunflower and constructed a railway carriage to show his work at the 1987 festival of photography in Arles. In 1991 he self-published a book of his imagery, entitled simply Work, then stopped making still photographs to focus on film, both commercial and personal. When he picked up a still camera again it was to return to his roots in the Midlands and a commission for Birmingham’s bid for European City of Culture in 2003.

For ‘Teamphoto’, Griffin takes a new tack, playfully drawing on influences from the recent history of photography and film. Some workers are shot in an Avedonesque style, against a white background, carrying their tools as props and references to what they do. The safety clothing of the stone cleaner, the steam cleaner and the welder, which gives these men the look of Tudor jousters, lent itself to a beautifully lit Irving Penn approach. Black and white shots are reminiscent of Soviet Constructivism with all the connotations of heroism. Some portraits borrow from nobody, and are quite simply beautifully crafted images. These workers are no ciphers and Griffin reveals a palpable tenderness – or is it reverence? – for his subjects.

Big Bang, Broadgate, London, 1986. Commissioned by Rosehaugh Stanhope Developments plc, this ran as a double-page advertisement for Broadgate in the Financial Times of 27 October 1986, the day when the UK financial market was deregulated. 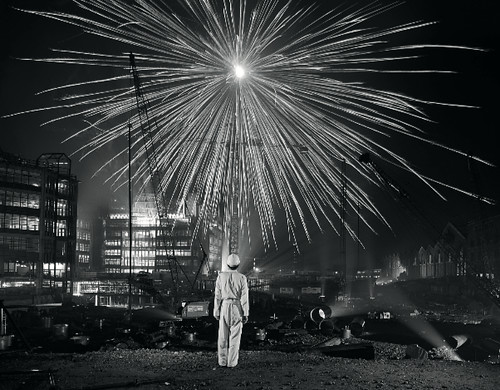 For Griffin, heroism plays no part in management, at least not in this project. To portray the ‘suits’ he draws on other styles of representation, depicting them in offices, car parks and Portakabins. In contemplative mood, the ‘thinkers’ in this mammoth project rarely engage with the camera. These shots, set up like film publicity stills, are archetypal early Griffin. He uses lighting to transform ‘non’ spaces, such as a bland reception area, creating a slightly sinister set to freeze a moment of performance. It is not only the formal choreography, the cropping and the use of body language that impresses, but that Griffin can make these performances happen. He doesn’t preconceive his images but finds them on the day, drawing on a remarkable imagination, technical virtuosity and adrenaline to pinpoint a location, light it and work with the sitters to create an intriguing scenario.

Griffin’s ‘cinematic’ approaches to the portraits of the us-based project engineers evoke the curious narratives in the work of David Lynch. By visually keying us into Lynch’s films the photographer introduces a psychological tension to the suburban American streets and the park where he shoots his subjects.

Other images that hang in the visual memory are those in which Griffin turns to references outside photography. Liam, the steel fixer, is like a biblical figure from sixteenth-century Italian painting. Shot in his work clothing, in black and white, against a scene of courtly love depicted in a mural in St Pancras Chambers, Liam becomes both worker and saint, representing all those that worked on High Speed 1.

The group shots are unlike anything that Griffin has done before. Redolent of frescoes by Ghirlandaio, these carefully constructed shots show managerial teams pressed together. Body language and facial expressions suggest something extraordinary going on between the sitters – something the viewer does not share. It demands scrutiny to unpick, and makes compelling viewing. 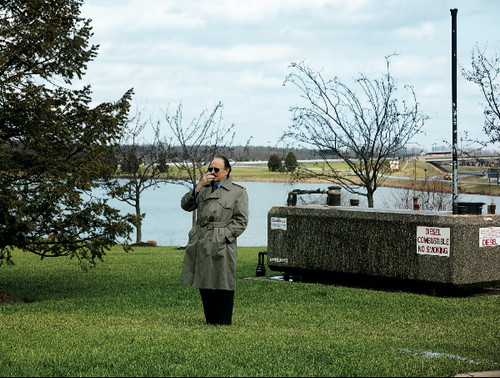 ‘Teamphoto’ may lack the singular vision of Griffin’s seminal Broadgate series, but it is a bigger project, with 150 shoots in Britain and the US, compressed into a short production time. Griffin’s strategy of grouping / breaking up the subjects stylistically is considered, and logical. On the gallery wall – and to a lesser extent in the book, which has the benefit of clearer sequencing and juxtapositions – the scale and logistics of ‘Teamphoto’ preclude it transcending the corporate commission it is. But unlike his Manchester Polytechnic peers such as Martin Parr, whose career focuses on personal projects and dissemination through books and galleries, Griffin has always followed his own obsessions while working for clients. It is a brave path to follow, and one in which the amount of control he has is bound to vary. The logistics of the ‘Teamphoto’ commission were challenging, yet the outcome is a powerful body of work that complements this breathtaking engineering project, giving it a human face – in turn saintly, heroic, irreverent, puzzling and playful.