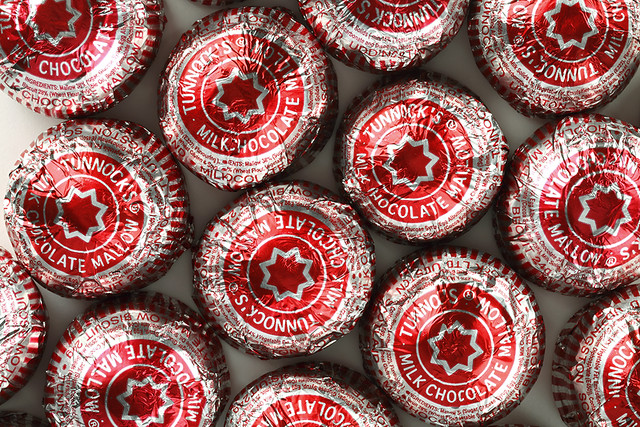 How many sugary treats these days are still actually wrapped in shimmering foil? Most confectioners have adopted plastic packaging for their chocolate bars, and even the KitKat has largely abandoned its trademark foil wrapper and deeply satisfying thumbnail opening technique in favour of a sealed bag.

Not so the Tunnock’s Tea Cake. This humble Scottish confection, along with its partner the Caramel Wafer Biscuit, still sits gleaming in supermarkets, kiosks and museum cafés across the UK, reminding consumers of a simpler, sweeter past. The foil wrapper, with its pattern of stars, circles and stripes, evokes a keep-calm-and-carry-on sense of Britishness; honest values supported by the twin columns of Tea and Cake.

Unwrapping such an object requires care. This sweet is dead-wrapped – fastened through folding rather than gluing – and so a Tunnock’s Tea Cake is disrobed rather than opened: tearing at this wrapper denies the consumer the pleasure of its complete design.

First delicately remove the Tea Cake, open out the foil square, and place it face up. Then carefully apply pressure, ironing out the creases with fingertips. Smoothed out, the foil square with its slogans and radiating red stripes looks almost Soviet.

Thomas Tunnock opened a small bakery bearing his family name in Uddingston, near Glasgow in 1890, and the company is currently led by Boyd Tunnock, his 80-year-old grandson. The Tea Cake arrived in the mid-1950s, and the wrapper is an example of British design that is both resilient and currently fashionable. Yorkshire Tea, Falcon’s enamelled crockery, Euthymol toothpaste – all these brands are now associated with both hipsters and heritage. Tunnock’s Tea Cakes are the Penguin Classics of confectionery.

The biscuit itself is an object that rewards close inspection. Biting into a Tunnock’s Tea Cake requires care. Biting into a Tea Cake is as much about expectation as it is about damage-limitation. It is not an easy mouthful: contained material will surge forth; there will be mess. With neither the stretchiness of marshmallow, nor the density of meringue, the soft innards of a Tea Cake are reminiscent of Mr Whippy soft ice-cream, though warm and eggy.

The many ways of eating a Tea Cake, and the ritual surrounding its unpacking, aligns the Tunnock company with traditional toy-makers. This biscuit is an immaculately produced plaything; a unique and delicious example of enduring British design. 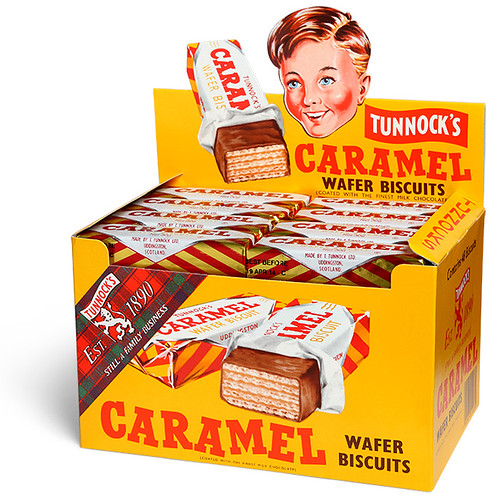