Made in 1941 for AD magazine, Herbert Matter’s ‘typographic ballet’ is a dreamlike curiosity

In the autumn of 1936, the Swiss designer and pioneer of photo-graphics Herbert Matter arrived in New York as the official tour photographer for the Zurich-based dance company Trudi Schoop. Marking the end of a two-month tour of America, Matter’s arrival in the city occasioned an opportunity to decide whether he had a liking for the country and its way of life. Like many other European émigrés before and after, the abundance of companies, agencies and publishing houses that populated the city, convinced him to stay and exploit new opportunities.

Matter’s first port of call was The Composing Room. Founded in 1927 by Dr. Robert L. Leslie and Sol Cantor, The Composing Room was no ordinary type foundry. As one brief history of this organisation has put it, Leslie ‘didn’t follow the accepted pattern with Composing Room promotion. He started holding typographic and design clinics for production men, young artists, and advertising people generally. These were held in The Composing Room offices, and in a spare room later christened a “gallery”. To impress and inform these audiences or classes – the series of meetings soon became a “course” – the ingenious “Doc” invited men of ability in the graphic arts to address the groups. The courses and meetings clicked.’

With the success of this design saloon and foreseeing a gap in the market, in 1934, Leslie created his own publication entitled PM (an abbreviation of production manager. This was subsequently changed to AD (art director) in 1939, when Ralph Ingersoll bought the title for his left-leaning daily). With the newspaper man Percy Seitlin as his co-editor and Hortense Mendel involved in publicity, this small-format periodical became one of the few publications to offer a platform for all that was new in both American and European graphic design. From 1934 to 1942, 66 issues of PM / AD showcased the work of such émigré designers as M. F. Agha, Josef Albers, Herbert Bayer, Will Burtin, Joseph Binder, and Walter Gropius. This was complemented by the exposure of designs and illustrations by homegrown talents such as Paul Rand, Lester Beall, and Joseph Sinel.

When Herbert Matter approached Seitlin and Leslie in 1936, it is certain that Leslie would have had some foreknowledge of his work, as it had been featured in the January 1936 edition of Gebrauchsgraphik. (Alongside his duties at The Composing Room, in the early 1930s Leslie had also been the American editor of this pioneering German design periodical.) However, it was not until they both observed Matter’s posters and photographs before them, that Seitlin and Leslie immediately recognised their exceptional quality and originality. Their instant response was to offer Matter an exhibition in the new A-D gallery. In addition to this being Matter’s first exhibition in the US, it also served as the opening exhibition for the gallery itself. Seitlin once recounted the meeting with Matter and the exhibition that followed: ‘A young man by the name of Herbert Matter had just arrived in this country from Switzerland with a bagful of ski posters and photographs of snow covered mountains . . . We decided to let hang some of his things on the walls and give him a party . . . The result was a crowd of almost bargain-basement dimensions, and thirsty too. Everyone was excited by the audacity and skill of Matter’s work.’ To further promote news of his arrival in America, a concise article outlining forthcoming work, together with a photograph of a youthful looking Matter playing with his Rolleiflex camera, were included in the November 1936 issue of PM. Subsequent to this, he was commissioned to develop one of the first works for The Composing Room, a strikingly original book on the new All-Purpose-Linotype process. Over the coming years Matter went on to produce numerous designs for PM / AD. However, almost as a denouement, in his concluding work for the company Matter returned to the theme of the linotype. Revealing the creative flexibility of this process, it was a concluding design that still stands apart as one of the most graphically inventive layouts of its time.

Created for the 1941 October-November issue, the Ballet of the A B C’s or The Crafty Linotyper, is a performance of startling virtuosity. Written by Percy Seitlin and illustrated by Emery I. Gondor (a Hungarian émigré artist who had arrived in New York the same year as Matter), it stands in the tradition of children’s books fashioned by such designers as El Lissitzky or Kurt Schwitters; books that sought to employ line, type and image as source materials from which to construct exquisite dreamlike stories. It is the tale of a linotype printer who, when he attempts to fix a broken linotype machine, is suddenly faced with three girls identified as ‘X’, ‘Y’ and ‘Z’ from inside the appliance. Free from the linotype, the girls suddenly begin to dance with the Crafty Linotyper, his assistant the Printer’s Devil, and the foreman. When the foreman gets angry about the amount of time that has been lost, ‘X’, ‘Y’ and ‘Z’ jump back into the linotype and the two men return to their work. When the foreman has gone, however, the Printer’s Devil returns to the back of the machine where he helps ‘the Quick Brown Fox’ and ‘the Lazy Dog’ out, and proceeds in a joyous dance with them. Eventually, the linotype explodes and all the letters burst asunder.

Seitlin continues: ‘Then, all the letters of the alphabet come out, plus Acute Accent, Grave Accent, Umlaut, Circumflex, Cedilla and Wrong Font. At first, the men are alarmed and rush to the assistance of the girls whom they imagine to be injured or dead in the explosion. But the pi-intoxicated girls, accustomed to the bondage of line-of-text regimentation, revel in their freedom. They begin to charm the workmen and engage them in a dance.’

The story eventually ends with the foreman wishing he had not chosen to dance with Wrong Font. Perfectly in harmony with this delightful story, Matter’s design transmits its excitement and exhilaration through a range of graphic elements including yellow lines, circles, and oversized letters. With Gondor’s illustrations never allowed to function as mere undemanding figures, headings are set at vibrant angles, while individual words and whole sentences mirror the energy of the story by suddenly detaching themselves from blocks of text. Matter’s most exhilarating spread is where the Crafty Linotyper’s assistant, the Printer’s Devil, presses the question mark key of the linotyper and the Question Mark girl appears. Across this layout ten circles of varying size accentuate the tumbling words and tilting paragraphs as Question Mark girl taunts the young assistant.

In the years that followed this design, Herbert Matter went on to perfect his unique experiments in photo-graphics. Among the hundreds of groundbreaking layouts, images, and posters he would produce, the Crafty Linotyper remains one of his most delightful and charismatic works. 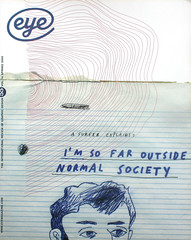