The media became squeamish when confronted with a gory anti-burger ad. Who are they trying to protect? Critique by Rick Poynor 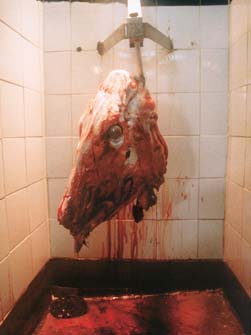 Looking at this recent anti-McDonald’s ad, which depicts a bloody cow’s head, I found myself thinking about Damien Hirst. The over-exposed British artist has built a career out of doing unpleasant things to dead animals. In an insert for Esquire, published in 1994, he put on a sharp-looking suit and appeared to take a chainsaw to a pig’s head.

I recall this unsavoury episode only because of the questions it raises about the nature of shock. These days, shock is a highly elastic notion. So much depends on the context. For a men’s magazine reader to admit to being shocked by Hirst’s chainsaw stunt would betray a serious shortage of irony. Finding amusement in his laddish escapade is made even easier by the thought that this gory dissection is the natural fate of ‘meat’. The pig was already dead, anyway, and what a great set of pictures – nice one, Damien.

The ad created for PETA (People for the Ethical Treatment of Animals) by London designers Lawrence & Beavan, takes it for granted that the cow’s head is intrinsically shocking – so shocking that it might make you think twice about eating in McDonald’s, and perhaps about eating meat. ‘Do you want fries with that?’ they ask. Well, no thanks. Certainly, it’s an ad that some people felt we really shouldn’t see. In Britain, Time Out magazine, the Sun and The Independent declined to run it, citing unspecified ‘legal grounds’, according to PETA. Even before the campaign had been launched, reports appeared saying that the Committee of Advertising Practice, the Advertising Standards Authority and the Outdoor Advertising Association would move to ‘ban’ the campaign.

Now it may be that these organisations really do have our tender sensibilities at heart. In the street, this violent image retains an undiminished power to outrage. It can safely be said that sensitive pensioners, five-year-old ‘Happy Meal’ eaters and a good many of the rest of us lack the tough protective coating of irony possessed by twentysomething ladmag readers. But in Britain, an established procedure exists to allow members of the public to complain about printed ads. If the Advertising Standards Authority (ASA) upholds the complaint, then members of this self-regulating system agree to remove or amend the offending ad. Of course, this does depend on a poster site owner or publication being prepared to take the ad in the first place. Free speech in this context is not ‘free’ in either sense: it is the prerogative of the media owner pocketing the advertiser’s cash.

The fact that McDonald’s spends billion a year on advertising may not be unconnected to the media industry’s attack of squeamishness over the PETA campaign. There is nothing in the asa’s advertising code that specifically prohibits the use of such imagery. Advertisements should contain nothing likely to cause serious or widespread offence, but fear and distress can be caused with good reason. ‘The rules make due allowance for public sensitivities but will not be used by the asa to diminish freedom of speech,’ the code states.

As for ‘legal grounds’, PETA is able to accuse McDonald’s of cruelty in its ad because in June 1997, in his summing up of the notorious ‘McLibel’ trial, Mr Justice Bell found the burger and nuggets giant ‘culpably responsible’ for cruelty to animals, as the defendants’ leaflet had claimed. For two years following that ruling, PETA’s American head office negotiated with McDonald’s in a bid to improve conditions for the chickens, pigs and cows slaughtered to make its meals. In August, believing they were getting nowhere, PETA broke off these talks and announced that October would be ‘Slam McDonald’s Month’, with demonstrations around the world.

Refusing to allow its international advertising campaign to be suppressed in Britain, PETA is taking a mobile billboard showing the poster ad on a tour of London, Birmingham, Manchester, Nottingham and other British cities and seaside towns. A paid-for A5 print version of the same ad is being published in Ethical Consumer magazine and the annual Government Procurement Directory (circulation: 36,000 civil servants).

As propaganda goes, it’s a small cry of protest compared to Ronald McDonald’s triumphant, global, Big Mac barrage. The skinned cow’s head is shocking, but the issue is of great ethical importance and people have a right to see it and decide for themselves. Many might also find it disturbing that others still presume to decide for us – irrespective of the truth – what we can and cannot freely see.