With talk of ‘pimping brands’, the ADC’s new campaign makes design look dumber than ever. Critique by Rick Poynor 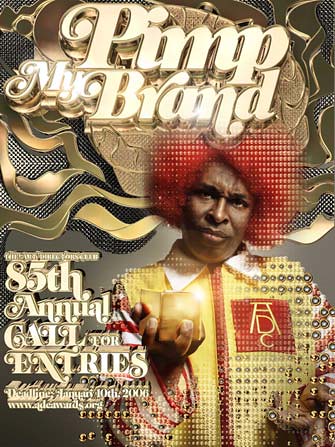 The Art Directors Club 85th annual call for entries may be the most off-the-mark piece of advertising ever produced by an organisation promoting the cause of communication. For those who didn’t receive a copy in the post, it shows a black man holding the ADC’s gold cube award. He is dressed like Ronald McDonald in a yellow and red costume with an embroidered ADC logo on his chest. His hair, an unconvincing wig, is styled as a red Afro.

The words ‘Pimp My Brand’ swirl above him in a tasteless explosion of gleaming gold. All the poster’s type looks like it was fashioned from melted-down ingots last seen in a bank vault. On the reverse, a statement explains: ‘Our clients want insanely compelling websites and banner ads, they want branded integration and branded entertainment . . . They want creativity that does more than creativity has ever done before.’

Reaction among American designers has been negative. Some assume the imagery to be a failed attempt at some kind of satire but, as ADC’s promotional copy shows, the poster appears to mean what it says. It isn’t poking fun at design’s takeover by branding language and imperatives. Quite the opposite: it endorses these developments, informing designers that it’s their role to supply ‘branded integration’. Clearly, the call for entries is meant to be light-hearted – ‘Ain’t no such thing as too much gold.’ – if not actually funny.

On the AIGA website, where an article by Steven Heller began a lively discussion, some expressed concern at this representation of an African-American man and, by extension, of black people. Heller complained that, ‘It plays to a stereotype of hip-hop as nasty, tastelessly extravagant and, ultimately, foolish.’ But the man looks nothing like a rap star – his face and expression suggest a grumpy middle-manager – while the ways in which the poster does signify hip-hop went largely unexamined. The lavish quantity of gold type certainly refers to contemporary urban culture, but in light of pop culture’s relentless celebration of ‘bling’, it’s hard to see how the poster is guilty of promoting an unfair stereotype of hip-hop stars as tastelessly extravagant. This form of wildly excessive conspicuous consumption has become a cultural norm – just tune into MTV Cribs.

The other key signifier of hip-hop is the phrase ‘Pimp My Brand’. ADC seems to think that this slang expression, made ubiquitous by MTV’s Pimp My Ride, where cars are given fancy makeovers, is an acceptable slogan. (A British version of the show aired in summer 2005.) And why not? Even reputable US publications now use ‘pimp my . . .’ in headlines. Some argue that phrases such as ‘pimp my’ and ‘pimped out’ have lost their association with sexual exploitation and are just the latest, harmless way of saying ‘spruced up’. This is either an attempt to hide the truth or naïve rubbish. The flamboyantly attired pimp, a man who controls prostitutes and lives off their earnings, has become a figure of cool, a cultural hero. Male rap stars portray themselves as pimps, as in 50 Cent’s song ‘P.I.M.P.’: ‘Man, this hoe you can have her, when I'm done I ain’t gon keep her / Man, bitches come and go, every nigga pimpin know.’ Another rap singer, Nelly, notorious for swiping a credit card between a dancer’s buttocks in a video, launched his own canned energy drink, Pimp Juice. How’s that for pimping your brand?

If the content of so many recent hip-hop songs and videos hasn’t made the real meaning of pimp clear enough, you don’t have to Google very hard to find a site called ‘Pimp my black teen’ – and it isn’t about the latest make-up. By using the phrase in such a casual, unquestioning manner, media organisations that should know better spread the idea that the pimp is a figure to admire and emulate. Meanwhile, in the real world, away from media fantasy, thousands of young women victims of international sex trafficking are tricked, abducted, transported, raped and beaten into submission by their pimps.

Talking about ‘pimping brands’ for clients does commercial design no favours. It suggests a degraded, exploitative form of practice in which there can be little honour for participants. One wonders how the judges feel about being associated with a competition presented in this way. The imagery may be misconceived and awkward. The language is just plain ugly.