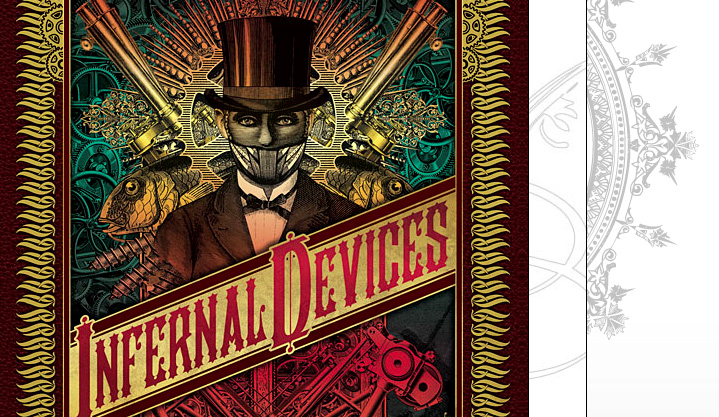 ‘His blog is kind of like finding a first edition of the Necronomicon three to four times a week.’ I know how this writer at the Dangerous Minds website feels. He is talking about John Coulthart’s Feuilleton, an extraordinarily committed undertaking even by the standards of the most compulsive and sleep-deprived bloggers. Coulthart set out, in February 2006, to post an item every day and so far as I can tell from random searches in his archive, and incredible as it might seem, he has stuck to this arduous programme, though he does down tools at Christmas for a brief respite.

I’m tempted to say that if you have never visited Feuilleton and don’t get the reference to the Necronomicon in the first sentence, then it might not be for you. But Feuilleton is so big now and labyrinthine that there is almost bound to be something of interest stored in there for most readers. Nevertheless, this reference to an entirely fictitious book of black arts invented by H. P. Lovecraft, American master of the horror story, does say something telling about Coulthart’s concerns. In an earlier phase, he was a brilliant visual interpreter of Lovecraft – see his book The Haunter of the Dark. Feuilleton abounds with discussion of every genus of fantastic art, with many luscious images that few visitors will have seen. Only Oscar Wilde’s name comes up on the site more often than Lovecraft’s.

I started visiting Feuilleton after it had been going for about a year, around the time that Coulthart posted a copiously illustrated item on Barney Bubbles that fired the engine on a juggernaut of comments – more than 200 over two years. But Bubbles, cherished by a coterie of fans back then (and Paul Gorman’s monograph Reasons to be Cheerful can be seen gestating on the thread), is now almost mainstream compared to the arcana that Coulthart often delights in.

Top: a book cover by Coulthart executed in the Steampunk style, shown on his main website. 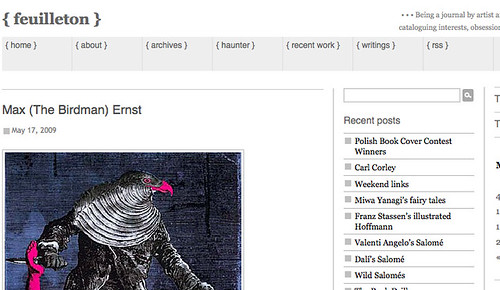 Again and again, I have found that Google Web and image searches lead back to Feuilleton. I don’t share all Coulthart’s tastes, but no other site so closely matches my interest in the fantastic in applied image-making and visual culture.

A recent instance is the artist Jim Leon, whose work I first saw decades ago in Oz magazine, and mentioned in passing in a post of my own. I should have known that Coulthart would be on the case and, sure enough, he was, with a post titled ‘The Art of Jim Leon, 1938-2002’ (15 March 2010). Leon produced a kind of psychedelic Surrealism, dark psychosexual fantasies – the sort of images that made Oz so controversial. Even now they are likely to trouble contemporary sensitivities. The Leon post led me to another Feuilleton item on the French artist Raymond Bertrand, once published and famous, and now out of print (his work, too, is far from PC) and I realised – even Coulthart might not know this – that the uncredited cover of the notorious ‘School Kids’ issue of Oz is a work by Bertrand, whose erotic drawings are offered for sale as posters inside.

Many graphic design blogs deliver an endless, barely filtered stream of appealing images: ‘Here’s another Pelican I found for my collection at the weekend.’ What lifts Feuilleton into another league, apart from its images, is the way it projects a refined, inquiring, complex and original sensibility. Coulthart knows a lot and he knows how the parts of his taste-world fit together. If you share these interests and enthusiasms, you can trust him.

Even his adaptation of a simple WordPress theme shows refinement: nothing showy but it feels right for the job and relates elegantly to his more ornate main website, where, as a designer and illustrator, he has been going through a heavy Steampunk phase.

Coulthart is also a reader, which gives his judgements depth. Walter Benjamin is a favourite, he announced early on. ‘I’ve read Friedrich Engels,’ he lets drop in ‘Steampunk Reloaded’ and goes on to mention Kellow Chesney’s The Victorian Underworld. In March, he was re-reading Alfred Kubin’s The Other Side and complaining about Dedalus’ poorly reproduced illustrations. He sings the praises of Julian Cope’s Krautrocksampler. He also admires Popol Vuh’s Aguirre soundtrack, Patrick Bokanowski’s L’Ange (I’m obliged to him for that), Arnold Böcklin’s The Isle of the Dead, and the incredible Sedlec Ossuary in the Czech Republic, shown in April, in a series of panoramic views he has been running.

I have only one quibble. He is a fine writer and I wish he would write longer pieces underpinned by more detailed research. It would do no harm now if he posted less often – who can keep up with it all? A truly mind-expanding blog.