Though we have designated this edition a ‘Public realm special issue’, it could be argued that Eye’s core subject matter – graphic design and visual culture – is always about the public. Visual communication is constantly being re-interpreted through its relationship with an audience. And most clients, from the smallest software house to the most monolithic property developer, seek to communicate with a public, and graphic design is one of the most effective vehicles they can use.

Clients often commission designers to increase the size of the public they reach, to create more attention, to sell more things – be they dog biscuits or classy magazines. In such cases, designers are often expected to square the time spent, and the fees billed, with the commercial effectiveness of their efforts. Yet we all know that many of the most interesting, influential, satisfying projects are difficult to link (arithmetically, at any rate) to the ‘bottom line’ of commerce, though they clearly make things better for people, and businessmen are part of the crowd, too.

Britain’s road signage is an example of a public project that benefited from the hard work and hands-on creativity of a graphic design practice. Kinneir and Calvert's time on the project was surprisingly brief, but British motorists and pedestrians now experience the benefits of a fundamentally well conceived system that in the intervening years has not always been adequately developed and applied (p.26). Their lessons of that venture were perhaps better applied elsewhere – in Widmer’s signs for French roads, for example (p.10).

Out in the street, and in the public eye, design is a kind of performance. Whether great, good or mediocre, the show goes ahead, the deadline looms. The empty interiors and uncluttered spaces envisaged by masterplanners rarely stay as pristine as the architects’ drawings. Such places, and the non-places in between (p.50) rapidly fill up with graphic marks that might be carefully designed, casually reproduced or the random collision of competing messages – the torn posters of ‘Surface wreckage’ (p.66). This barrage of visual information forms the backdrop, the hecklers, competing performers and background chatter against which designers seek to grab the attention of the crowd. Whether that designer is telling long stories or delivering hip one-liners, this background of noisy visual culture is difficult to ignore: it has to be confronted, appeased, interpreted or transcended.

The public response to the joint international publication of the ‘First Things First Manifesto 2000’ (Eye no. 33 vol. 9) indicates that designers are more than ready to question the moral and social issues implicit in their everyday work – and act on their conclusions. Working in the public realm, whether via the Web, the store or the street, means that society at large is your client as well as your audience. Maybe becoming a ‘socially responsible designer’ is another way of doing the job properly – the mark of a professional. 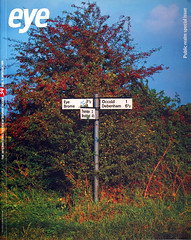