Finger on the trigger

It's designed to shock, but Amnesty's arms trade ad is weak compared to Lord of War's brilliant titles. Critique by Rick Poynor 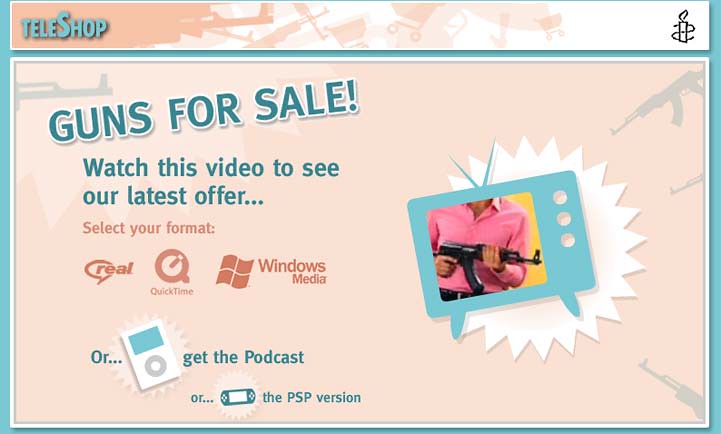 Amnesty International hoped its recent TeleShop commercial aimed at the arms trade would shock and disturb those viewers who saw it in British cinemas during February (it can still be seen at ww.protectthehuman.com) and inspire them to lobby government to sign up to an International Arms Trade Treaty. But was it the most effective way of handling the subject?

The two-minute commercial is shot to resemble a TV shopping channel. Two tanned and jovial presenters in a pastel-coloured studio make us an offer we can't refuse. TeleShop has 10,000 AK-47 assault rifles stored in secret locations outside the UK. Phone now to buy 'the villain's favourite', a veteran of more than 75 wars. Hard cash, dollars processed through offshore accounts and even diamonds are acceptable in payment. 'There are rather convenient loopholes in the rules governing the arms trade around the world, so you needn't worry - you won't get in trouble,' explains Clive, who is wearing a pink shirt. 'That's good to know, Clive,' says Sue, 'and it's good for business as well.'

All the details of tele-shopping are well observed. The channel's logo, a shopping trolley, is permanently on screen and the rifle is displayed throughout in a graphic box, showing the TeleShop price-saving. The number of units sold climbs rapidly, until it exceeds 9000, and further information about the rifle scrolls along the bottom of the screen. The AK-47 reposes on a rotating stand covered in blue velvet, and the spot captures the patronisingly upbeat language of commercial inducement to a tee. 'I might have to treat myself to one, I think,' coos Sue. Informing viewers that child soldiers in Liberia and the Democratic Republic of Congo use the weapon, the presenters introduce a teenage boy, Sam, who machine-guns a mannequin, leaving smoking holes in the dummy's polo shirt. 'Head. Lungs. Heart - obliterated,' Clive enthuses. 'Fantastic.'

The commercial makes its point, yet it seems to assume we are so jaded that only the most self-flattering and roundabout way of delivering the message will capture our attention. Instead of showing us real child soldiers at work in Liberia, which should be disturbing enough, the commercial is sidetracked by advertising's aspirations to creative irreverence, its contradictory desire to both trendy and iconoclastic. (Mother is the agency behind it.) Is humour necessary or even appropriate to the subject? Is it likely that a shopping channel viewer who had never thought about the arms trade before could be made suddenly conscious of the laughable aspects of the tele-shopping format and thereby alerted to the carnage these inadequately regulated weapons bring about? As for more sophisticated viewers, when the audience is soaked in images of violence, both actual and fictional, it seems improbable that visual euphemism could succeed in making violence shocking again. The ad's somewhat laboured ironies come across as squeamishness.

This was made clear by the commercial's inclusion on the rental DVD of the feature film Lord of War, in which Nicolas Cage plays a charming but corrupt arms dealer. The film's title sequence, with computer-generated imagery supervised by Laurent Gillet and typography by Imaginary Forces, is a brilliantly gritty encapsulation of its theme. In structure and impact, it might almost be an ad. To the haunting strains of Buffalo Springfield's 'For What It's Worth', a Vietnam-era protest song, the sequence traces the life-cycle of a bullet - seen from the bullet's point of view. We observe the shell being manufactured, packed, inspected, shipped, shaken loose from its crate, picked up, and transported through an African country on a truck. Finally, a soldier's hand loads the bullet into a gun. We follow its path through the air until it hits a young man in the head and the screen turns red.

Lord of War's titles have the brutal clarity in construction, clear polemical purpose and cold anger of a John Heartfield photomontage. Like the TeleShop ad, they use a degree of estrangement to make us see an over-familiar situation with fresh eyes, but the film titles opt to stick closely to the reality of bullet production and use, which is much more uncomfortable. The repeated image of two fingers picking up the bullet, and the blank expressions of men peering at it, underline collective responsibility for the arms trade. Jokes are beside the point here. The sequence compels us to face up to what we already know.