From out of the blue

Volume one of Anna Atkins’ beautiful study of British algae, issued in 1843, was the first ever publication to be printed using photography.
Photo Critique by Rick Poynor 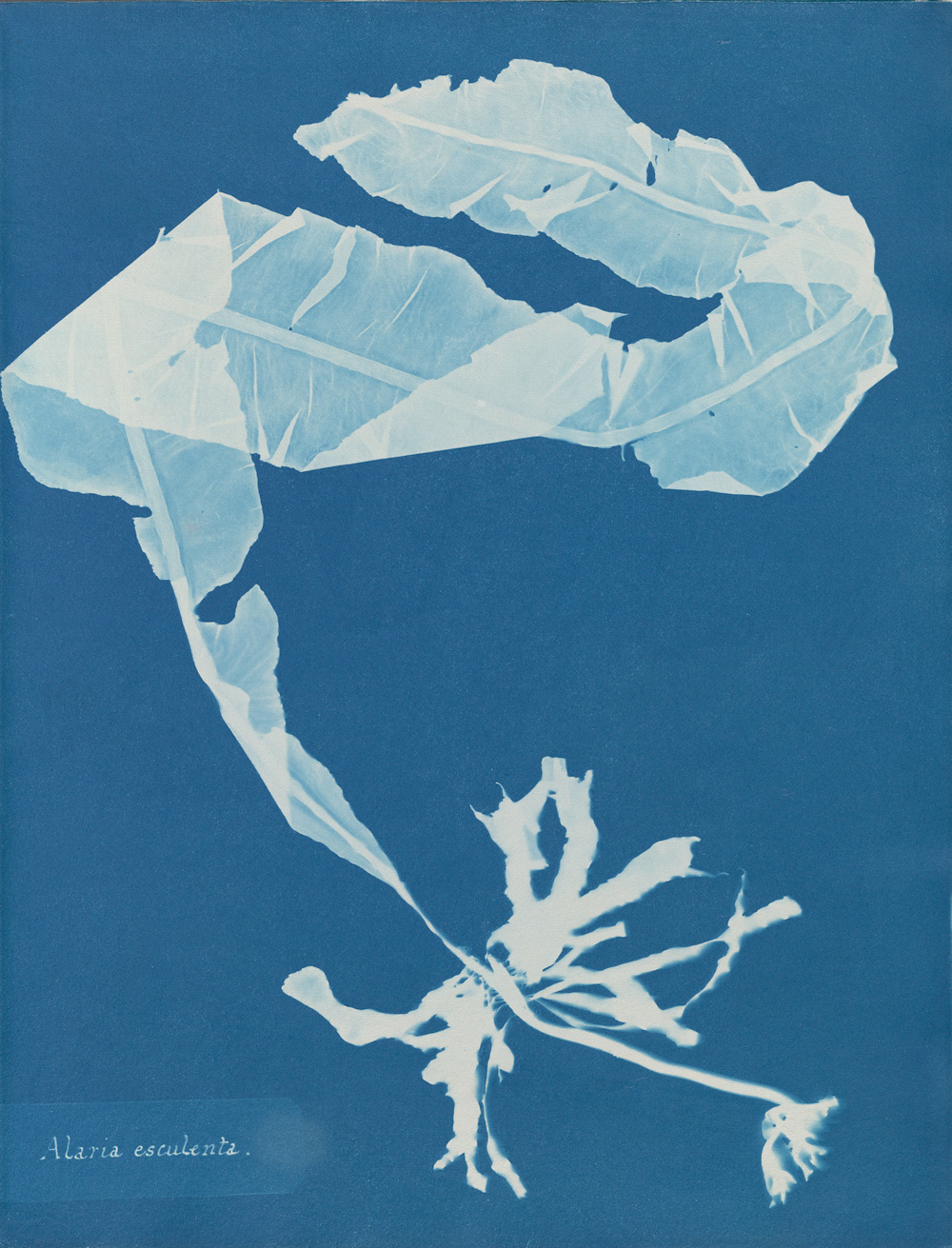 Anna Atkins (1799-1871) is widely regarded today as the creator of the first ever photographically illustrated book. The first instalment of her multi-part Photographs of British Algae: Cyanotype Impressions appeared in 1843, a few months ahead of William Henry Fox Talbot’s celebrated The Pencil of Nature. Atkins signed her work only with her initials and sought no publicity for herself. Only fourteen complete or largely complete copies are known to survive and it wasn’t until the publication of Larry J. Schaaf’s Sun Gardens: Victorian Photograms by Anna Atkins in 1985 that her achievement was properly recognised. That book – retitled Sun Gardens: Cyanotypes by Anna Atkins – has now been expanded with the aid of Joshua Chang to accompany a recent exhibition at The New York Public Library. 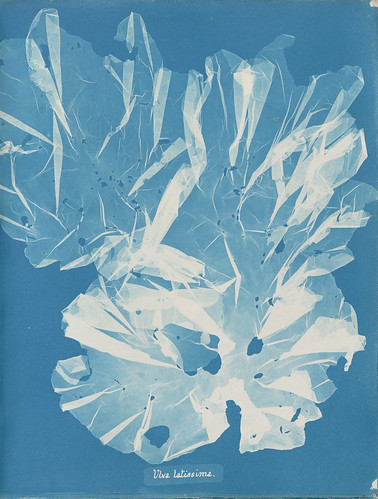 It is a ravishing volume, a study in blue, exquisitely designed by Miko McGinty. Part 1 of British Algae is reprinted within the book in its entirety as a facsimile, and numerous pages from Atkins’ later fern studies are presented at their correct size. Atkins used the cyanotype (or blueprint) method invented by Sir John Herschel, a friend of her scientist father, John George Children, who encouraged his daughter’s appreciation of science and botanical interests. The process involves coating ordinary writing paper with ferric ammonium citrate and potassium ferricyanide. When the paper is dry it can be used to make a picture from a negative or a photogram from an object placed on the surface. All that is required to expose the image are the sun’s rays. Washing the exposed cyanotype with water turns it blue and fixes the image. 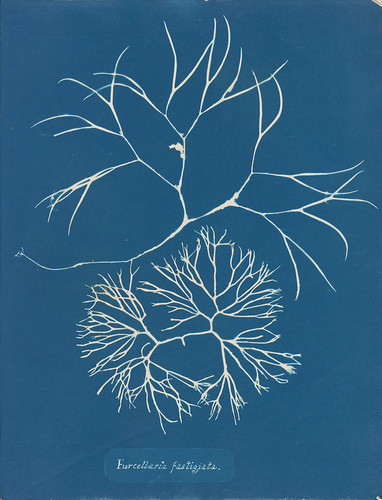 Every page of British Algae was produced in this way. The sample of algae (or seaweed) being recorded had to be lifted off the exposed paper and rearranged in a similar position on a new sheet so that each version of the page is slightly different, even though the information conveyed is essentially the same. All the text is in Atkins’ handwriting and she created nicely bizarre ‘seaweed’ letterforms for the title pages. The pages were presented loose because book collectors would often prefer to undertake their own binding in a uniform style for their libraries. In the course of the project, which took ten years to complete, Atkins produced and supplied better versions of some images and there are consequently variations of sequence across the different copies of the book, where recipients didn’t always understand her intentions when it came to assembly. 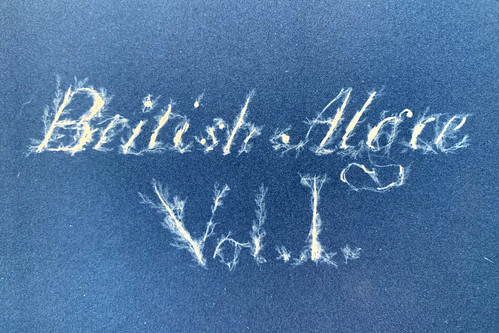 Schaaf notes that Atkins’ cyanotypes have ‘aesthetic appeal’ – she called it a ‘beautiful process’ – and that they are early indicators of the ‘expressive potential’ of photography, although it isn’t Sun Gardens’ purpose to pursue this. The blue plates possess a reductive clarity. The page is empty except for the specimen, like a pale silhouette, and the wavering handwritten label, which looks like a luminous miniature sample in its own right. Placement of the algae determines page layout. The aquatic subjects appear to float in the blue void, their long fronds curled inwards to fit into the space, or stretched out artfully from one corner to the other. Cyanotypes are perfect for recording outlines but unable to capture details of surface, except where a structure is thin enough for light to shine through. As Schaaf observes, ‘Cyanotypy was restrictive as a medium, but within the narrowly defined compass of British Algae its considerable advantages could be exploited to the fullest.’ 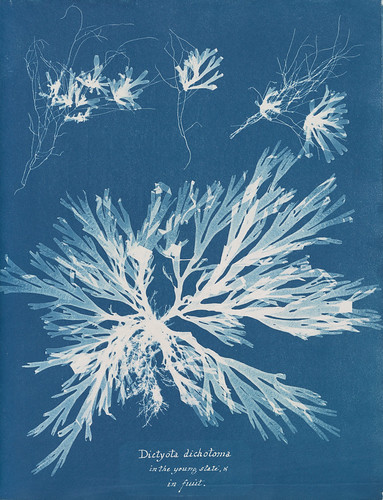 As a contribution to botanical studies, British Algae had some limitations. With only a few exceptions, Atkins didn’t identify the specimens’ collection points – significant information for other researchers – and the book lacks fuller documentation, wide-ranging references and an index. The translucence of the plates, lovely as it is, would have limited the images’ usefulness for identification purposes. Nevertheless, British Algae was the first book of any kind, anywhere in the world, to be printed using photography instead of typesetting and conventional illustration. It was also, Schaaf notes, ‘the first successful attempt to apply photography to the complex task of making repeatable images for scientific study and learning.’

After Atkins had finished her monumental labours on British Algae, she switched her attention to ferns, which she studied and documented for the remainder of her active life. Her hugely ambitious project was a visionary undertaking at the dawn of photography and the camera-less, chemical images still glow, as if newly revealed, with a spectral light. 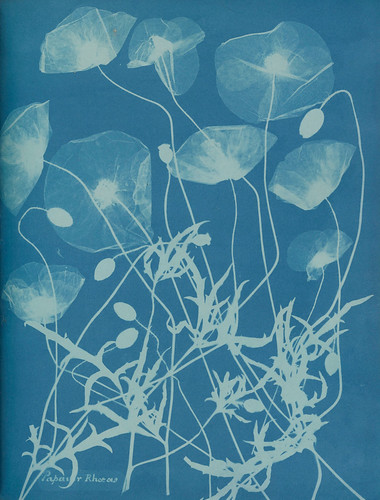