Hoot your trap off (Web only)

The ad campaign for a satirical TV sitcom represents a new kind of subvertising. How cool is that? Critique by Rick Poynor 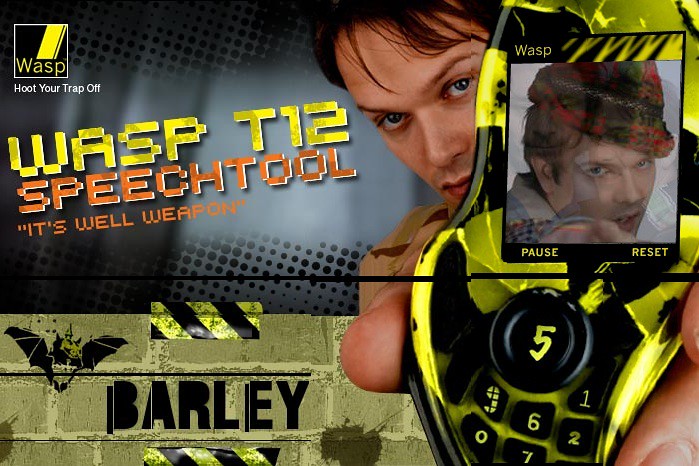 The first time I saw the Wasp T12 Speechtool poster I nearly kept on walking. Could there be a more fatuous idea than calling a mobile phone or cell phone a ‘speechtool’? The quote underneath this marketing gem was even more irritating: ‘It’s well weapon.’ The ‘well’ was bad enough. But now the adjective that usually follows this idiom had been replaced by a noun, to make a phrase that was ‘well dickhead’. It was enough to make you want to hurl a copy of Eats, Shoots & Leaves at the thing.

Then I noticed the name of the guy brandishing his speechtool at us, Nathan Barley, and the penny dropped. Nathan Barley is the title of a new Channel 4 sitcom that starts on 11 February. Barley, as the poster says, is a 26-year-old ‘underground media scoundrel’, screenwriter and DJ, as well as a Wasp T12 user. So the poster is a spoof, a teaser for the programme, and a week before the launch it was everywhere. I saw it three times at bus shelters on the way to my local station and again on the platform.

The man behind the poster, comedian and satirist Chris Morris, is one of the most provocative figures working in British TV. His 24-hour news parody, The Day Today, and fake documentary series, Brass Eye, savaged media pretensions and pomposities, sometimes – as with a programme about paedophilia – causing a storm of complaints.

Like ‘cake’, Morris’s ‘made-up drug’ featured in Brass Eye, The Wasp T12 is a made-up mobile. And, like his earlier pranks, the poster is so accurately observed, with its plausible yellow slash Wasp logo in the corner, that you could fall for it easily, though the T12’s listed functions are ridiculous, given a moment’s thought. What would you expect from a phone if not ‘full fidelity vox phoning’ and what kind of berk would need ‘voice authority enhancement’ and a ‘text insult dictionary’?

But the poster, like the people and products it lampoons, is about attitude and Nathan Barley has plenty of that. Wasp’s slogan is ‘Hoot your trap off’ and Nathan looks like someone who would jump at a text insult facility, while the T12, with its scuffed, hazard-tape patina and shark-like outline, does resemble some kind of weapon. At the website given on the poster (www.trashbat.co.ck) the joke is pushed to new levels of absurdity. The narrow display is ‘compressed wide screen’, the keypad features every known integer – well, it would – and a facility called ‘intelligent thermotones’ allows you to rate caller IDs according to coolness. The T12’s design is a ‘subversively cool-shape style-shape’.

The poster is a particularly seamless piece of culture jamming. I saw it next to an Orange mobile network ad, with the slogan ‘Send 2 texts 4 the price of 1’, and it looked like the real thing. Its purpose may be to promote the programme, but it reads primarily as a sardonic swipe at manipulative lifestyle branding aimed at young people, and this anti-consumerist message has the benefit, for once, of hundreds of locations. The idea is so unfamiliar, though, that many viewers may have overlooked it. We just don’t expect this kind of dissent at the bus stop and it would be easy, if you dislike crass ads, to blank it out, as I nearly did myself. It’s doubtful, too, whether anyone who felt inspired to try to buy a T12 would be shaken out of their infatuation with cool technology by discovering it was a hoax, but that’s their problem.

As an ad for the programme, the poster’s effectiveness may be limited. The sitcom isn’t mentioned by name and there are no transmission details. The reference to Channel 4 is so subtle that it took me a while to realise it contained one at all. The ‘4’ on the keypad, a tiny area of the poster surface, is the Channel 4 logo.

That just adds to the poster’s interest as a new kind of subvertising. One of the strengths of Brass Eye was its astute parody of the self-important and melodramatic TV graphics used for sensationalistic news programmes and documentaries. Morris’s scorn verges on nihilism and the rightness of these supporting details helps to give his satires Swiftian bite. When it comes to Nathan Barley, questions have already arisen about whether its mocking picture of the new media scene in Shoreditch, London is five years out of date. That will soon become apparent. But the poster hits the right keys and does it within a framework usually unavailable to this kind of satirical message. 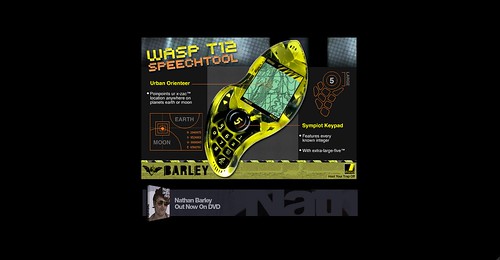 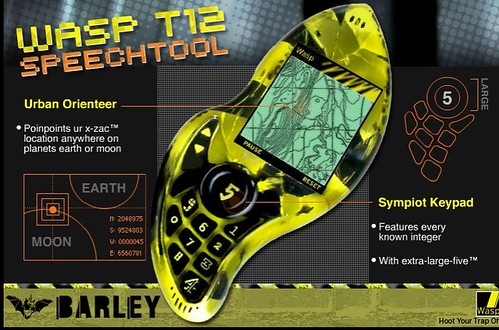