The client says he wants it in green

There is a peculiar irony, possibly unintended, in the current release from the Emigre font library. The Californian company’s latest font, Big Cheese, is not a typeface – at least as we used to understand the term – but a set of 126 illustrations in two weights, light and dark, which can be accessed like a visual alphabet from the keyboard. Designed by Bob Aufuldish and Eric Donelan, it is quite a character set: a goofy catalogue of heads, hands, hats, dogs, fish, talking cars and walking bombs that look more like the kind of stylised pictogram you would expect to find on the restroom door in a Barcelona nightclub than a serious offering from the nerve centre of typographic cool.

The irony? Simply that a once flourishing graphic medium, illustration, should now find itself subsumed by the organisational framework and borrowing the delivery system of the very phenomenon – digital type – that has supplanted it in the affections of trend-conscious designers.

For illustration, it must be said, has been looking rather sick of late. Fine work is, needless to say, still being done. The great names of the medium did not somehow cease to be good just because the computer arrived, though they may have been given fewer opportunities to perform at their best. But in the age of digital type, in a medium that is driven, whether we live to acknowledge it or not, by fashion and fad, even the best illustrators’ work has suffered from the no doubt superficial but still unavoidable sense of looking less urgent, exciting or timely.

In Europe, there can be no sharper demonstration of this process in action than the annual Illustration Now (Booth-Clibborn Editions, 1992; previously published as European Illustration). The book contains much that is derivative and dull – alongside such reliable contributors as Brad Holland, David Hughes, Caroyln Goudy and Peter Till – but its overriding problem is that its design by digital typographer Jonathan Barnbrook is far more imaginative and, yes, contemporary-looking than most of the supposedly fresh illustration it contains. Barnbrook’s front matter and section divider pages are hard-edged montages of type, image and blocks of shrill colour that conceal a more serious message; they are, in fact, illustrations in their own right. But their very toughness makes many of the “real” hand-crafted illustrations in the book look twee.

Tweeness, indeed, has become the illustrator’s curse. If European illustration is in difficulty now, it is not only because the arrival of the computer has recalibrated our aesthetic expectations. It is also because, as the 1980s wore on, illustrators and art directors seemed increasingly unsure what illustration was for. In Britain, there was simply too much of it to retain a sense of conceptual focus. The booming design business’ insatiable need for acres of anodyne imagery to fill brochures, annual reports, financial services leaflets and point-of-sale displays was fuelled by an explosion of new courses in the art schools dedicated to the training of full-time professional illustrators – a concept which had barely existed before the 1970s.

If many of the finest illustrators of an earlier generation concentrated on editorial or culture-related projects – books, magazines, newspapers, film and theatre posters – to which they brought personal vision and a degree of bite, too many of the newer illustrators have evolved signature styles that are no more than the blandest of selling tools. The cumulative effect is of a nursery world in which people caper about like bendy dolls, the sun never fails to shine, and there are enough cut-outs to make Matisse throw away his scissors in disgust. It is Stanley Spencer, or Thomas Hart Benton, for the under-fives. And this, inevitably, became the kind of work favoured by the agents who sprang up to market illustrators’ services to design groups and advertising agencies. Image-makers of less pliant or tameable image found themselves rather less often in demand.

Using the design business’ own well-worn rhetoric, the agencies attempt to sell illustration as a “problem solving” tool. This is the approach taken in Illuminations (Elfande, 1993), a book jointly produced by the London agency Sharp Practice and the Edinburgh design group Mcllory Coates. Uncertainly pitched between seriousness (it has a hardback cover and is written by a journalist) and selling brochure, the book presents a series of fictitious design briefs with their illustration-led solutions. The agency represents some exceptional artists – Andrzej Dudzinski, Liz Pyle, Richard Parent, Christopher Corr – but the effect is cloying and contrived. As is typical with work of this kind, word and image are not tightly integrated, with the type all too often pushed out to the margins as the illustration expands in a cloud of colour to fill the available space.

This is not for one moment to suggest that illustration can never be used successfully as a design tool. We know that it can. But designers and art directors who reach for the illustration annuals and agency portfolios as a kind of reflex should remember that many of the best integrated and hence most satisfying examples of “problem solving” illustration come from individuals with the ability to carry out both illustration and design: figures such as Edward Bawden, Ben Shahn, Milton Glaser, Seymour Chwast, Alan Fletcher and Bob Gill. As Chwast himself once put it, establishing the order of priorities: “I’m a designer who illustrates.”

The art director, by comparison, starts with a distinct disadvantage. It takes rare talent, sound artistic judgement and great intuitive sympathy to recognise and harness the talent of others. Many try. How many truly succeed? There are worrying signs, too, that the relationship is breaking down – that art direction today is a less well practised, if not declining, art. Certainly it is a process that many illustrators seem to view with a mixture of disillusion and dread. The complaints are legion: art directors don’t know what they wan, fail to give a proper brief, or rethink the brief halfway through. Art directors meekly allow their clients to practise design by committee and to specify pointless changes. Art directors present clients with a mock-up cobbled together from the illustrator’s previous work, turning the creative task into a depressing act of self-parody.

To which, if you are an illustrator, must be added a final note of woe: the ascendancy of the photographer. Ever since Neville Brody – himself an illustrator of some talent – rejected the use of illustration in The Face in favour of photography, which he found more malleable and easier to integrate with type, many of Britain’s most creative designers have preferred photographic emulsion to the crayon or brush. Companies such as Why Not Associates, Cartlidge Levene and Siobhan Keaney went on to establish lasting relationships with individual photographers, while the most consistent mainstream award-winners, Carroll, Dempsey & Thirkell, consolidated their reputation with photography-based design. As with the new digital typography, the effect of the continuing preference for photography within this influential group is to make most design based on illustration look decidedly old hat.

In illustration, meanwhile, it is the work based on collage and montage that has looked most convincing for several years, and this too allows the photographic image to flourish. A tendency that began in Britain in the early 1980s with the texture-collages of Russell Mills (see Eye no.5 vol.2) and others, and continues in the work of photographer/illustrators such as Simon Larbalestier and the Douglas Brothers, is now well established in the US, as for instance in the solarised photo-paintings of Amy Guip. Larbalestier’s book The Art and Craft of Montage (Mitchell Beazley, 1993) is, incidentally, by far the most stimulating guide to recent illustration.

There are those contemplating this trend who argue that what we need now is a rejection of montage and image manipulation and a return to drawing and the skills of the hand. They should not hold their breath. Designers now have the ability, using desktop computers, colour copiers and CD-ROM, to manipulate photographic imagery with greater freedom than ever before. As these systems become cheaper and more accessible, the likeliest development is that the collage impulse will migrate from paper illustration to the more fluid and dynamic screen. Designers will then become type and image constructors in the fullest sense of the term. This will not make illustrators redundant, but it may well force a reassessment of their role. If it leads to less but better illustration, then it will be no bad thing. 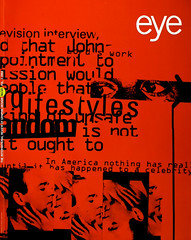