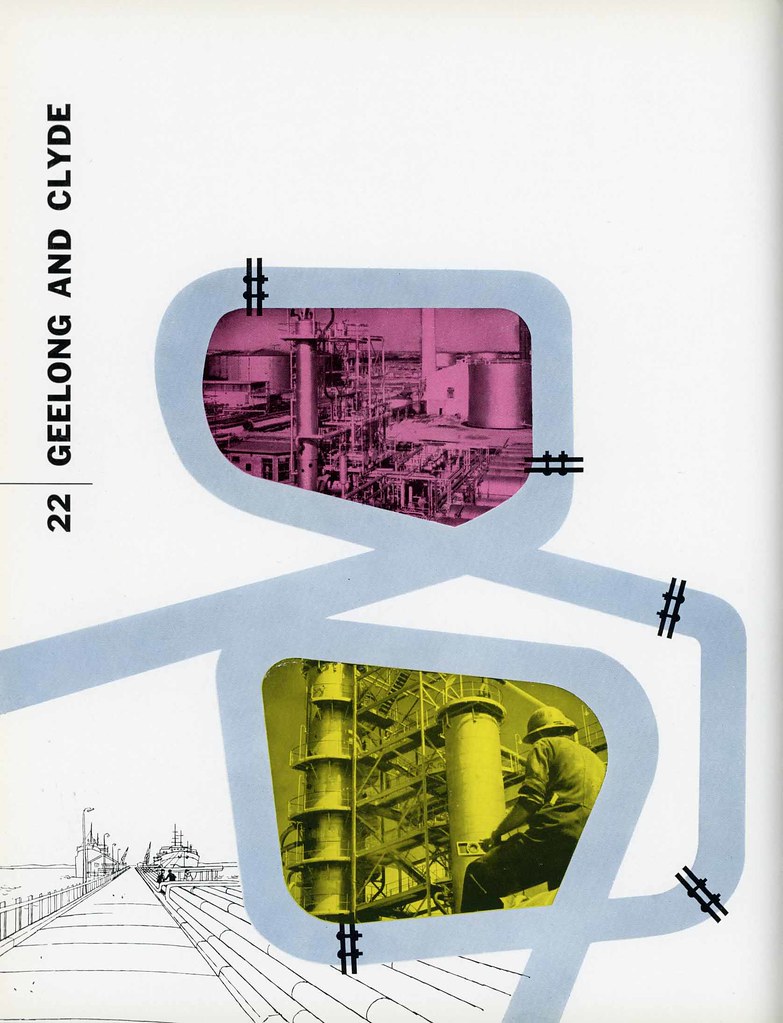 Nobody can be more aware than designers of the mountain of designed material that enjoys its brief moment of use and then simply disappears.
A small fraction finds its way into books, though graphic design history, considered country by country, still has surprisingly few authoritative overviews. A tiny, privileged percentage comes to form the canon, a questionable construction that may change out of all recognition under the pressure to ‘decolonise design’ in the decades ahead. What I want to talk about here is a photographic book from 1960 that happened to fall into my hands. On the one hand, to discuss this lost volume could seem arbitrary: why this book now? On the other, chance discoveries are an effective way of turning the soil.

The book is This Age of Oil, published by the Petroleum Information Bureau (Australia), a promotional organisation based in Melbourne. It is an early example of design and art direction by Frank Eidlitz (1923-97), an unfamiliar figure outside Australia, though nationals interested in design history will know his name. Born in Hungary and educated at the Royal Academy of Art in Budapest, Eidlitz arrived in Australia in 1948 and first surfaced as a designer in 1955, working on Family Circle magazine. Around that time, he designed An Artist Looks at Altona Refinery for Standard Vacuum Refining Company and, at his next employer, United Services Publicity, he specialised in high-quality publications for business.

All spreads from This Age of Oil (1960), designed by Frank Eidlitz. Pages 160-163 about the Shell oil refinery at Corio Bay, Victoria, north of Geelong. The book has no photography or illustration credits. Top. Chapter opening, page 158. 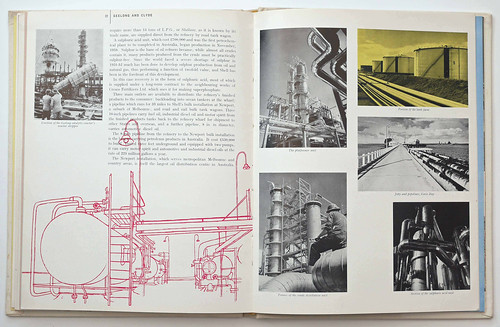 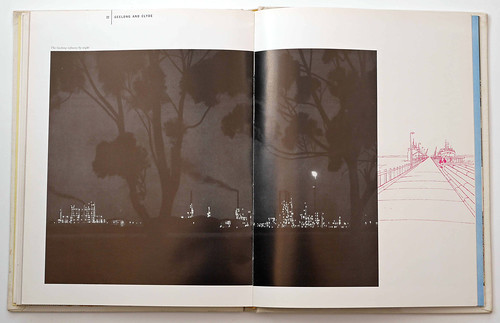 While This Age of Oil inevitably looks a little dated today, it was an impressive publication for its time and place. ‘Artistically the volume is a fine example of the imaginative and sophisticated book design which Australian publishers, sparing no expense, can produce,’ a reviewer noted in the Bulletin of the Business Archives Council of Australia (January 1961). The writer goes on to ask what the purpose of such a lavish production might be and detects a shift in industry towards a managerial emphasis on marketing and salesmanship. The confident ring of the title is a sign of the book’s motivations. Exhaustive credits, which provide complete details of the typefaces and papers used, reveal the text’s author to be a public relations consultancy, Clive Turnbull and Associates – then active in the industries of aviation, wine and petrol – working under the editorial supervision of the Petroleum Information Bureau.

Eidlitz’s relationship to the project was the same one that designers in this position have always occupied. His task was to make the industry look good: modern, efficient, profitable, essential to society and a thriving economy. In the present era of climate emergency, the subject of fossil fuels is fraught. Climate activists demand they be left in the ground. Many now call for divestment. For designers like Eidlitz, shaped by rousing mid-twentieth-century visions of technological progress and excited by the imagery of industrial power, such a job could only look positive and inviting. Eidlitz’s page design contrives to be both sober-sided – there is nothing here to disturb a goal-orientated, commercially minded oilman – and seductively contemporary. 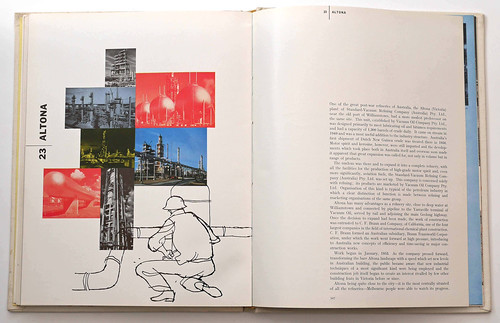 This Age of Oil is in three sections, dealing with the history of petrol production in Australia, the marketing companies and the oil refineries.
A unifying framework, and much of the book’s feeling of modernity, comes from 26 chapter opening pages where Eidlitz pits montages made of drawings, graphic shapes and photographs against the chapter titles on the left-hand side. He flips the chapter title from vertical to horizontal for the company chapters and back to vertical for the refineries. These devices become increasingly modern in style as the book’s chronology delivers new technologies, and they are at their most adventurous in the final section about refineries. 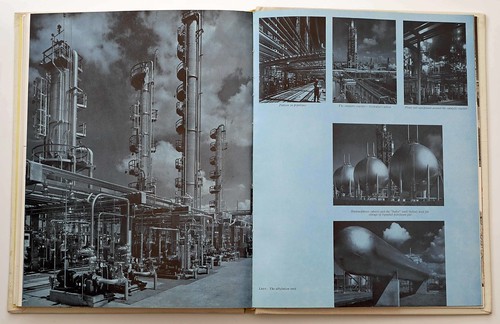 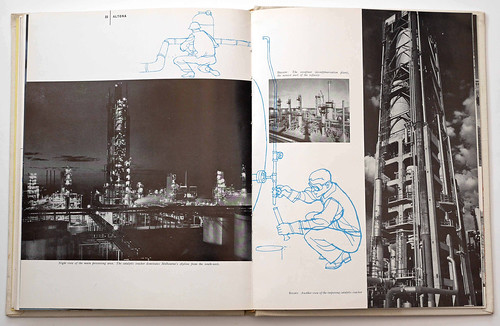 Eidlitz girdles irregularly shaped photos with stylised pipelines and overlaps a drawing of an oil worker with a block of colourised shots. He sustains the collisions of photography and informal line drawing – printed in black, blue or red – throughout the refineries section. The absence of a credit for the sketches suggests he may have executed them himself. Although the photos of control rooms, storage tanks, catalytic cracking units, crude distillation units and desulphurisation plants are fascinating in themselves, the hand-rendering of dedicated personnel hard at work helps to humanise these vast petrochemical palaces, interlinking the pictures across the layout and making the spreads both dynamic and unexpectedly playful.

BP’s Kwinana plant near Fremantle in Western Australia, the largest refinery in the country, pages 188-189. 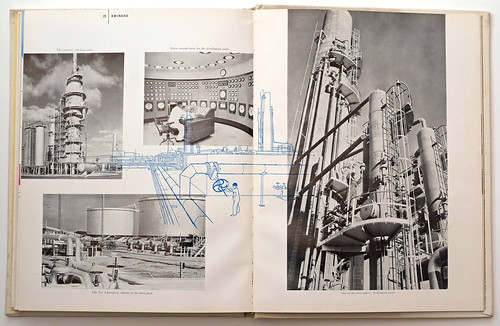 Promotional publications like This Age of Oil can feel tinged in retrospect with a feeling of poignancy. ‘It is the fervent hope of all Australians that one day, not too far off, we shall see the Australian industry feeding into its refineries not crude oil imported from abroad but the raw products of newly-discovered copious wells in our own continent or territory,’ declares the Minister for National Development in the foreword. The book’s uncomplicated advocacy of the oil industry, then regarded as a limitless source of power and wealth with no negative consequences, now looks misconceived: a perilous trap from which the world must extricate itself. But it was the conviction of the ‘age’. Eidlitz’s best known project, from 1964, is a set of 24-sheet Op art advertising posters for Shell, which pulse with the same optimistic belief in the future of oil.