Visual Editions’ box of literary maps challenges authors to think differently about the structures that link words and images. Critique by Rick Poynor 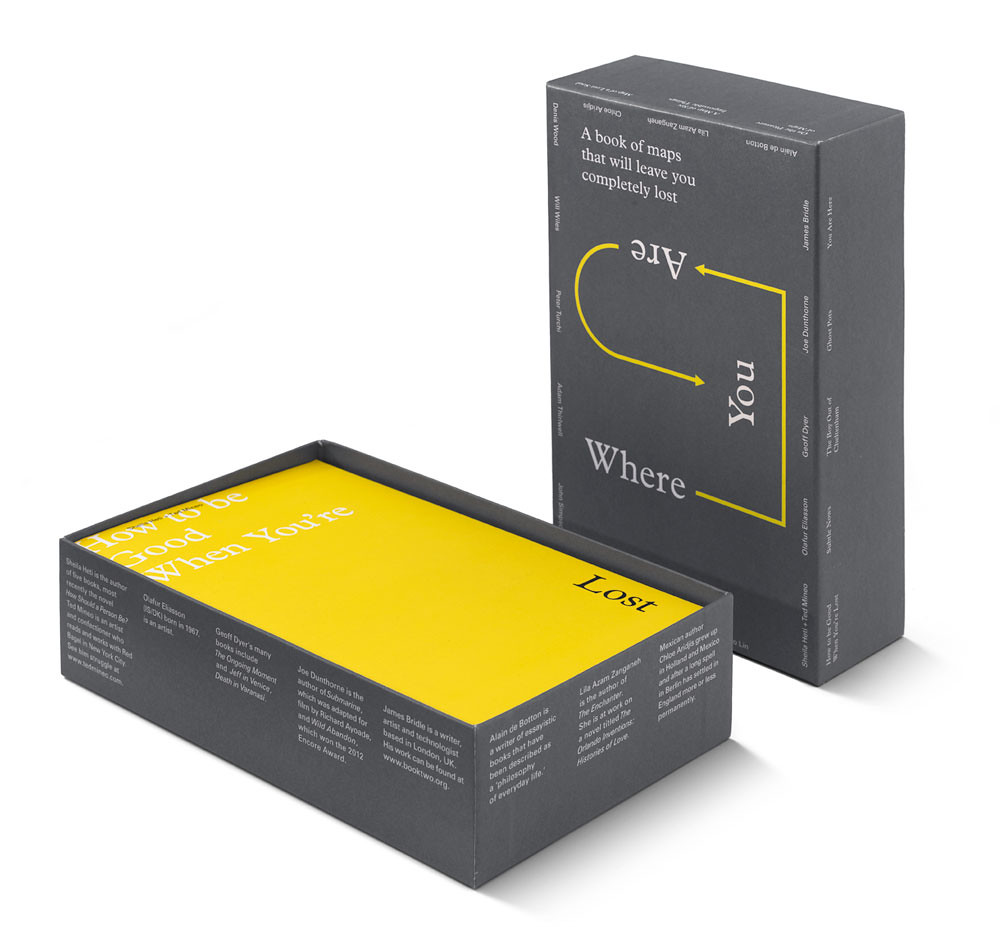 Visual Editions’ fifth publication, Where You Are, a box with sixteen projects based on maps and mapping, is their most ambitious venture to date. Founded by Anna Gerber and Britt Iversen in London in 2010, VE aim to produce books that are as visually interesting and involving as the stories they tell. The generic term sometimes used for this kind of practice is visual literature; Gerber and Iversen call it ‘visual writing’.

From their first project, a new edition of the eighteenth-century ‘pre-modern postmodern’ novel The Life and Opinions of Tristram Shandy, Gentleman (see Eye 77), introduced by Will Self, VE have shown a flair for imaginative initiatives backed up by stylish and witty promotion. For their second title, Tree of Codes, VE attracted another literary heavyweight, Jonathan Safran Foer, as collaborator. Their choice of designers has been consistently sharp: A Practice for Everyday Life, Sara De Bondt, Universal Everything, Studio Frith and now Bibliothèque to orchestrate Where You Are (with help from Google’s Creative Lab).

This is VE’s second book in a box, following a new edition of Marc Saporta’s Composition No. 1, originally published in 1962, which anticipated B. S. Johnson’s novel The Unfortunates – loose signatures in a box – by seven years. Other recent books in boxes include Marc Dion’s The Marvelous Museum (2010), The Household Box (2011), published by Redstone Press (which has always liked boxes) and Chris Ware’s Building Stories (2012). My guess is that VE will keep returning to the box format: this is the age of the expanded, digital-defying book object, and there is no neater way of containing adventurous attempts to disassemble the bound book into discrete, variously sized units.

In a tour de force of visual extrapolation and interplay, each of Where You Are’s sections receives its own combination of sheets, pages and folds; the only restriction is that the folded page size must fit the box. Lifting out the pieces, particularly for the first time, opening them up and exploring these intricacies is so enjoyable that it seems a shame the book doesn’t include a seventeenth section with notes about its production.

For followers of visual literature, Where You Are offers a multidimensional case study in the construction of works that are potentially equal parts writing and visual form. A conventional literary reading of these texts by writers such as Adam Thirlwell (who wrote VE’s fourth book Kapow!), Chloe Aridjis, Will Wiles, Lila Azam Zanganeh and BBC foreign correspondent John Simpson would clearly be insufficient, if not obtuse. It would be just as myopic, though, to treat this highly designed object as a design exercise. Comparing attempts to address the theme of mapping by so many authors, including a few artists, has the effect of focusing thoughts on what criteria might be used to determine success in pieces of writing where the image, too, should be read as a text, and where even the way that it folds must be taken into account.

For me, Geoff Dyer’s ‘The Boy Out of Cheltenham’ emerged as a benchmark. Dyer’s memory sketch fully addresses the book’s theme and it has a clarity of conception that extends to every component, from the gridded aerial map of his hometown, which opens out alongside the text, to the circular symbols used to indicate schools, girlfriends, drugs, ‘trouble’ and death. The writing embraces the possibilities of visual prose. Instead of composing formal linked paragraphs, as many other contributors do, Dyer frames his boyhood recollections as a non-linear, annotated list of homes, relatives, sports venues and drinking places. It is gripping, affecting and graphic (in both senses) and will be a mine for any future biographer. The style and tone are completely Dyer-esque.

He is given a close run by the hipster American novelist Tao Lin, whose disquieting and darkly comic report on the fate of three socially maladjusted, wi-fi-using ‘lunar hamsters’ is also an assured piece of graphic writing built upon his own scratchy drawing of the hamsters’ tunnel system. Leanne Shapton’s semi-abstract painted ‘tablescapes’ of her workspace desktop are lustrously fluid, though this is a collection of pictures rather than an equal dialogue between word and image. More successful in that respect is Valeria Luiselli’s ‘Swings of Harlem’, which finds a controlled emotional tension between blurred Polaroids of a child swinging in various parks and the writer’s parental reflections on the facing pages.

Not all the contributions are so well resolved. Collaborations of this type demand new kinds of structural thinking from writers, a feeling for the space around the words and a willingness to move tactically between different modes of address. As a project that encompasses so many experiments, Where You Are draws up a set of maps of possible directions. It will be fascinating to see where Visual Editions go from here.

‘Map of a Lost Soul’ by Chloe Aridjis.
Top: Where You Are, sixteen ‘personal cartographies’ in a box, published by Visual Editions, 2013. 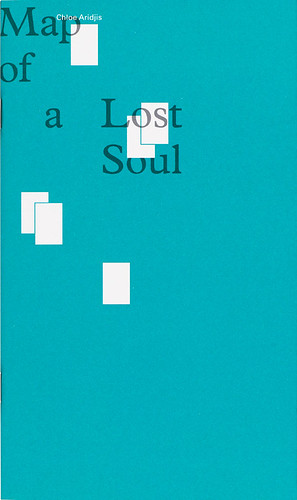