The joy and sadness of dust

A familiar domestic nuisance provides the theme for this ambiguous and labyrinthine exhibition.
Photo Critique by Rick Poynor 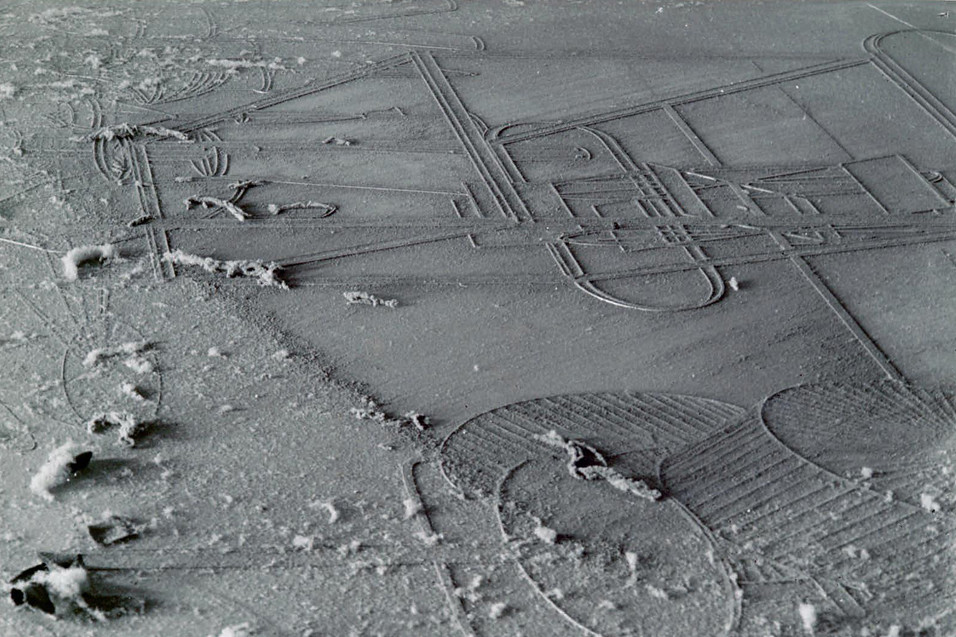 ‘A Handful of Dust’ at the Whitechapel Gallery, curated by photography writer David Campany, is a singular and fascinating exhibition that is best approached as a kind of visual essay. It weaves and loops around its theme and forges speculative connections across time and place, as if piecing together and disclosing a secret history. On the way, it uncovers or reintroduces some electrifying imagery. It is less a watertight case than a kind of meditation, steeped in a sense of wonder and melancholy, the abiding themes of photography. By sifting and rearranging the evidence, from photojournalism to recent art projects, it makes a familiar domestic nuisance unfathomably strange. 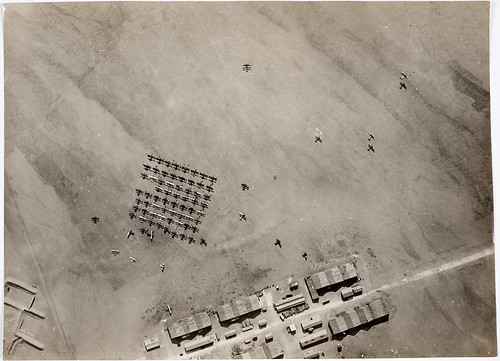 Campany’s starting point is a celebrated photograph from 1920, jointly signed by Man Ray and Marcel Duchamp, showing drifts of dust accumulating on the surface of Duchamp’s The Bride Stripped Bare by Her Bachelors, Even, also known as ‘The Large Glass’. The picture, a record of work-in-progress that can be viewed as a work of art in its own right, resembles an aerial reconnaissance photo, like those taken during the 1914-18 war, and examples of the genre are hanging nearby.

Later titled Dust Breeding, the image was published in Littérature in 1922, where a caption describes it as a ‘view from an aeroplane’ and revels in its ambiguity: ‘how arid it is / how fertile is / how joyous it is / how sad it is!’ In an entry on dust from the subversive ‘Critical Dictionary’ published in Documents in 1929, which Campany also shows, Georges Bataille imagines ‘dismal sheets of dust’ invading human dwellings and defiling them to prepare them for occupation by phantoms. Dust Breeding surfaces again in Kynaston McShine’s catalogue for ‘Information’ at MoMA in 1970, where it is juxtaposed with a photograph of scarred flesh. 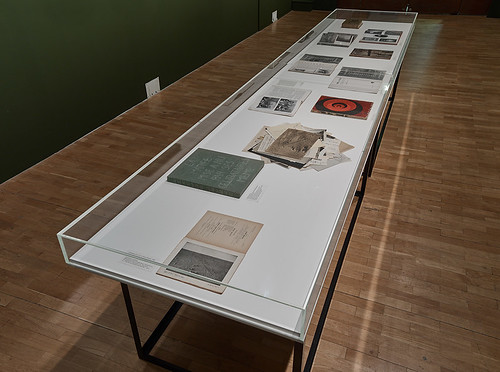 In The Waste Land (1922), T. S. Eliot writes, ‘I will show you fear in a handful of dust’ and intimations and memories of trauma infuse many of the exhibition’s dust-connected images. In the first room, the haunting opening sequence from Alain Resnais’ Hiroshima Mon Amour (1959), a landmark of French New Wave cinema, plays on a loop. A rain of ash falls on the intertwined limbs of two lovers and then rain turns the ash to a glistening crystalline patina before it is finally washed away, like a ceremony of purification. A press agency picture taken in 1955 shows Benito Mussolini’s car abandoned in a garage in Milan. After years of neglect, the bonnet of the executed dictator’s Lancia is shrouded in unpleasant looking grey dust. 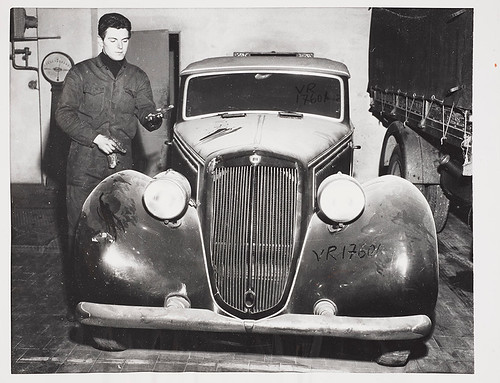 Chains of association lead to a 1945 Vogue cover, where the model appears to be imprisoned within ‘The Large Glass’ like a real-life bride; a field of wheat that resembles a rug from the air, seen on a magazine spread; and the graffiti photographs of Brassaï, where the narrow channels scratched into stone walls imply the dust they no longer contain. As with his book about Walker Evans’ magazine work, Campany makes telling use of the presentation of photography in magazines such as Vu and Minotaure. This openness to the cultural evidence, graphic texture and proximity to a historical moment that printed materials can bring to exhibitions is increasingly common among art-world curators. ‘A Handful of Dust’ is a labyrinth of arresting images (with an equally inventive book) that treats art, photography and publishing as interconnected and mutually illuminating strands of the curator’s thesis. 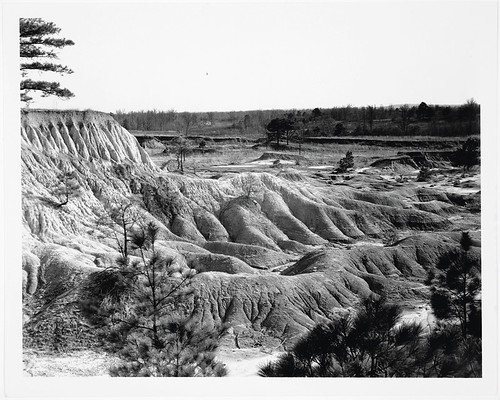 The second room opens with further examples of documentary images as rich in implication as the fine art they hang next to. Thirty commercial postcards, of the type collected by photography writers such as Luc Sante, record scenes of rolling dust storms and drifts in Kansas and the American Midwest in 1935-37. Dust becomes, once again, not only a metaphor but also a potentially sinister entropic phenomenon, here with destructive power. This sequence of images anticipates the large-scale projects by artists such as Edward Ruscha, Gerhard Richter, John Divola and Eva Stenram that dominate the rest of the show. With a larger gallery space to fill, ‘A Handful of Dust’ starts to feel a little less essayistic and intimate and more like a conventional fine art survey, though it never strays from its theme.

Eva Stenram, from the series ‘Per Pulverem ad Astra’, 2007, courtesy the artist. 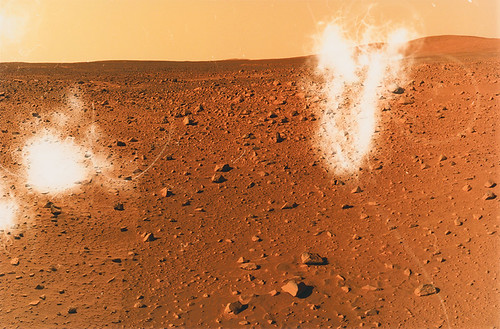 The exhibition closes with pleasing symmetry with an aerial photograph by Sophie Ristelhueber with an obvious kinship to Dust Breeding. In her book Fait [Aftermath], Ristelhueber collected photographs of the mutilated landscape in Kuwait, taken in 1991 after the Gulf War. Man Ray’s picture was an influence, always in her mind as she worked, but she felt À cause de l’élevage de poussière (Because of dust breeding) was too similar and left it out of the book. The photograph becomes the final teasing piece of evidence that key events in the twentieth century are prophetically present in Man Ray’s talismanic study of dust. 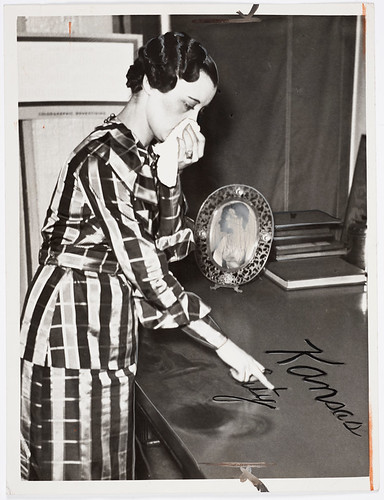 ‘A Handful of Dust’ is at the Whitechapel Gallery, London until 3 September 2017.