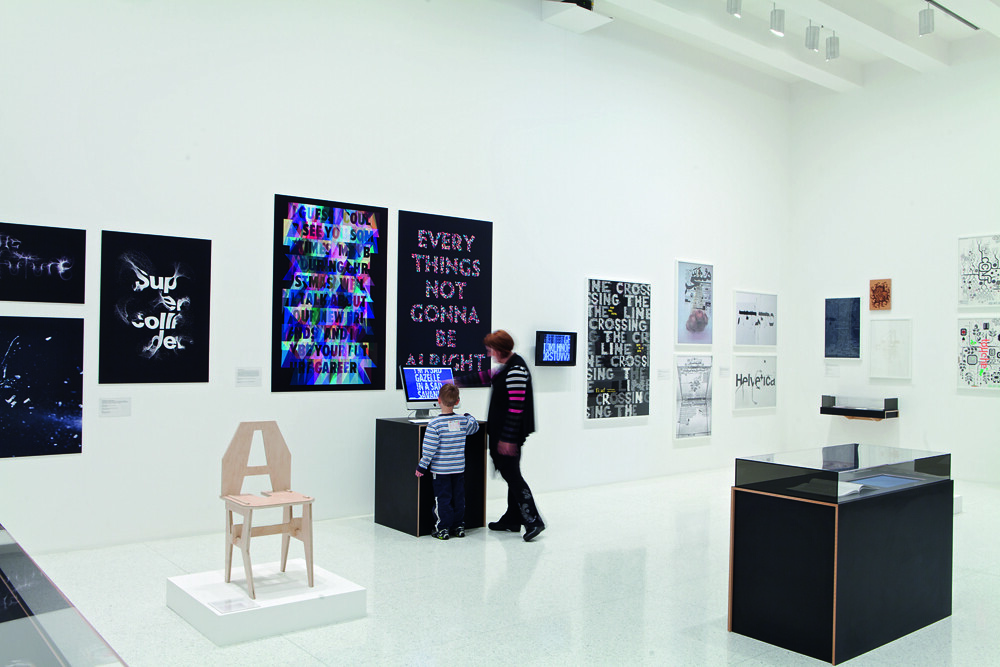 The first major museum-based American graphic design exhibition in fifteen years, ‘Graphic Design: Now in Production’ is jointly curated by Andrew Blauvelt of the Walker and Ellen Lupton of the Cooper-Hewitt National Design Museum, assisted by Ian Albinson (for film title sequences), Jeremy Leslie (magazines), and Armin Vit and Bryony Gomez-Palacio (shaping the branding and identity category). Together they are a curatorial ‘dream team’, with deep and broad knowledge of contemporary graphic design, and complementary skills in designing, researching, writing, managing and producing.

The collaborative nature of the exhibition, which includes opportunities for visitor participation, in-gallery shopping and ‘crowd-sourced’ content, signals something unique about this radically conceived yet – on the surface – conventionally presented show. The traditional ‘content + context/curator = exhibition’ model has added the participation of designers as actors, and has invited the involvement of the public, inverting the visitor relationship in surprising ways. Wikipedia entries serve as captions in the catalogue, bloggers critique redesigned brands, and viewers physically activate a digital poster wall, generating a smartphone-readable QR code. The show’s most ambitious social programming, an educational experiment called Night School, brings together students from local colleges for a term, using the exhibition as laboratory and textbook, and being on public view during the Walker’s free Thursday evenings.

Largely drawn from the past decade, and primarily from American and northern European graphic designers, the exhibition content is organised into conventional formats: posters, magazines, information graphics, books, film titling and other motion graphics, typography and typefaces, and branding and identity. While the individual works in each category exemplify the discipline’s most creative and celebrated producers, the division of works into such standard categories – reinforced by chambers in the gallery – represents a missed opportunity, and one actually advocated in the catalogue.

This exhibition respects the art gallery convention – a clean contemporary design with bespoke display furniture, two-dimensional work under glass, and large computer screens for displaying interactive media. But doesn’t graphic design merit a different contextual and spatial framework – one connected to the everyday? Much of the work demands wheat paste and a brick wall, or a tv in an airport lounge, or a shop in an uptown neighbourhood. How might those environments be translated into a museum?

There are occasional refreshing interruptions: the cascading ‘paperfall’ of screen-printed posters by the Minneapolis firm Aesthetic Apparatus, the unsettlingly over-sized charts and diagrams in the ‘information space’ section, and the ‘storefront’ that offers visitors the chance to handle and buy some of the cultural artefacts they have seen on display. An opportunity for a Peter Buchanan-Smith hand-painted axe to meet a log of Minnesota oak, perhaps.

The 224-page catalogue appears to differ curatorially from the exhibition. Besides presenting its images and texts as ‘salon-style hangings [that create] unexpected juxtapositions’, it embodies the zeitgeist through strategies of sampling, remixing and non-linearity. Essays by some of the field’s best known writers, including Steven Heller, Peter Hall, Lorraine Wild and Peter Bilak elaborate on the exhibition’s content. Images serve to caption the text in surprising ways: Michael Rock’s ‘Fuck Content’ essay is paired with children’s books, for example, as a possible commentary on how he might wind down his career. With the insertion of the Åbäke collective’s sixteen-page script I Am Still Alive #21, the catalogue itself becomes part of the exhibition, not merely its documentary cousin. Because this is the only signature of the publication to be printed across the paper grain, with heavily inked pages, it flips differently – a clever disruption. One criticism is that the caption type is too small, which is unfortunate, as it is all worth reading.

An exhibition this comprehensive invites visitors to find the voids: packaging design, environmental graphics, websites, and other quotidian forms (where is Shepard Fairey’s Obama ‘Hope’ poster?). Perhaps the luscious designs from the progressive practices on display – no single object seems undeserving conceptually or aesthetically – best serve the curators’ visions: relational, participatory, open-sourced and yet aggregated into standard classifications. Alternative groupings are suggested literally and visually in the catalogue: sharing, commentary, networking, craft, repurposing, labour, authorship and so on.

Comparison with the Walker’s 1989 ‘Graphic Design in America’ exhibition is unavoidable. Its curator, Mildred Friedman, would probably be intrigued by this show (and bemused by Daniel Eatock’s Pantone marker prints). Friedman organised her show into thematic clusters – environmental design (signage, symbols, posters, billboards and events), design for mass media (television and film motion graphics, publications), and design for institutions (government, business, cultural, visual communications and identities): perhaps a more sophisticated scheme than the one used by Blauvelt and Lupton.

But inspection of ‘Graphic Design: Now in Production’ from within each category reveals some provocative choices. Metahaven’s specially commissioned installation Facestate, ‘a research project about … parallels between social networks and the state’, sits next to Google’s ever-changing and sometimes irritatingly cute logo. Bloomberg Businessweek magazine is a few steps from Peet Pienaar’s Fluxus-like Afro, setting up numerous interpretations. It is in this space between works that visitors construct their own meaning, while reflecting on the curators’ intentions.

James Goggin’s catalogue essay expresses the ‘both/and’ angle well: ‘This slightly ambiguous position, a distinctly in-between discipline that is both everywhere and nowhere, is to our benefit, allowing graphic design to talk without boundaries to a wider audience while also enabling us to infiltrate and use the systems of other disciplines when desired and where relevant.’

Theory suggests that twentieth-century modernity facilitated Friedman’s particular codification, a top-down focus on the forest. Blauvelt, Lupton and their colleagues’ choices bubble up, however, an emergent landscape of exotic trees and flowers – simultaneously objects, formats and processes. In this respect, the ‘Graphic Design: Now in Production’ exhibition (which will be touring the us for the next three years) succeeds as hybrid state: both simple and complex, radical and traditional, challenging and affirming. It achieves this quality not through compromise but through an expansive notion of exhibition curation as a dynamic, probing and inclusive process. 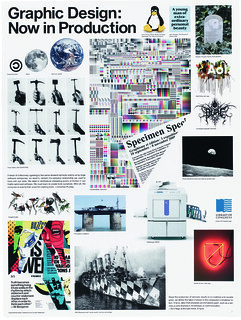