Delights at the end of the Mersey tunnel

Little known outside the northwest of England, Steve Hardstaff can correctly be described as ‘designer-in-chief to Liverpool’s music business’. Cover Versions: The Album Art of Steve Hardstaff is the first collection of a body of work realised over four decades.

Having provided record sleeves and gig posters for many of the important groups emanating from the city – from Pete Wylie’s ever-changing Wah! to the enduring Half Man Half Biscuit – Hardstaff also realised the visual identity for key venues such as Eric’s, the punk crucible, and the labels run out of the Probe Records store.

He can even claim involvement with the Fab Four, having assisted Jann Haworth and Peter Blake in ferrying images for the cover of The Beatles’ Sgt. Pepper’s Lonely Hearts Club Band in 1967. In 1997 he recreated that cover for ‘Thirty Years Ago Today’, at the Bluecoat Gallery, Liverpool, featuring 80 life-size cut-outs of figures nominated by artists associated with the venue. These ranged from individuals who appeared in the original (such as Gandhi) to Posh Spice and a halo-ed Michael Jackson.

Such laconic absurdism is one of the few graspable themes running through Hardstaff’s unstylised ouevre, which takes in neo-constructivism, 1950s sci-fi pastiche, Jamie Reid-style iconoclasm for the punk band Instant Agony, Crumb-like illustrations for blues and jump-jazz compilations, and even post-psychedelic cosmic Art Nouveau for a Led Zeppelin poster (somewhat in the manner of Barney Bubbles, another under-appreciated music business graphics innovator).

Like Bubbles, Hardstaff has worked under a pseudonym – Jacuzzi – for much of his career. During the vinyl years, he experimented with album packaging, producing what is claimed to be the first triple gatefold sleeve for the Strawbs’ 1972 release Grave New World.

Right and top: spreads and cover from Cover Versions: The Album Art of of Steve Hardstaff, showing the 12" x 36" triple gatefold inner sleeve, Grave New World, The Strawbs; 7" front and back cover, ‘No Regrets’, Half Man Half Biscuit and Margi Clarke (with Jamie Reid); 12" cover ‘This Leaden Pall’, Half Man half biscuit.

A vital political edge is manifested in typographically stern anti-Tory flyers and posters, while accomplished use of collage brings to life his contribution to ‘Trophies of Empire’, the Bluecoat’s 1993 exploration of the imperial and colonial legacies in British ports such as Liverpool.

Hardstaff is at his most successful when harnessed to the warped comic worldview of Half Man Half Biscuit. For their debut album, Back in the DHSS, he used an exposed photograph of a youth’s face that he had found in the street and treated with fluorescent washes of pink and blue. His cover for the more recent This Leaden Pall (1999) – a grey depiction of buildings in the depressed suburb of Halewood – was nominated among the best 100 album sleeves of all time by Q magazine.

Now a lecturer in graphic arts at Liverpool John Moores University, Hardstaff continues to practise, often for the Ozit-Morpheus reissue label and his own Big Snake imprint, which releases ‘unlikely musical mixes’.

Designed by Hardstaff’s one-time pupil Ged Doyle around segmented anecdotes, is a refreshing and suitably unpretentious anti-monograph, though vertically placed captions tend to clutter, and an index would have helped track individuals and artwork through the thematic and non-chronological format.

Nevertheless Cover Versions throws welcome light on this hard-grafting music nut and his collection of ‘delights at the end of the tunnel’, in the words of the book’s working title. 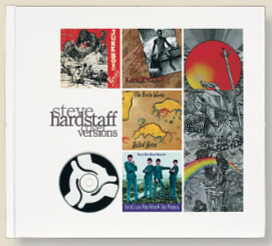