Impressions of another time 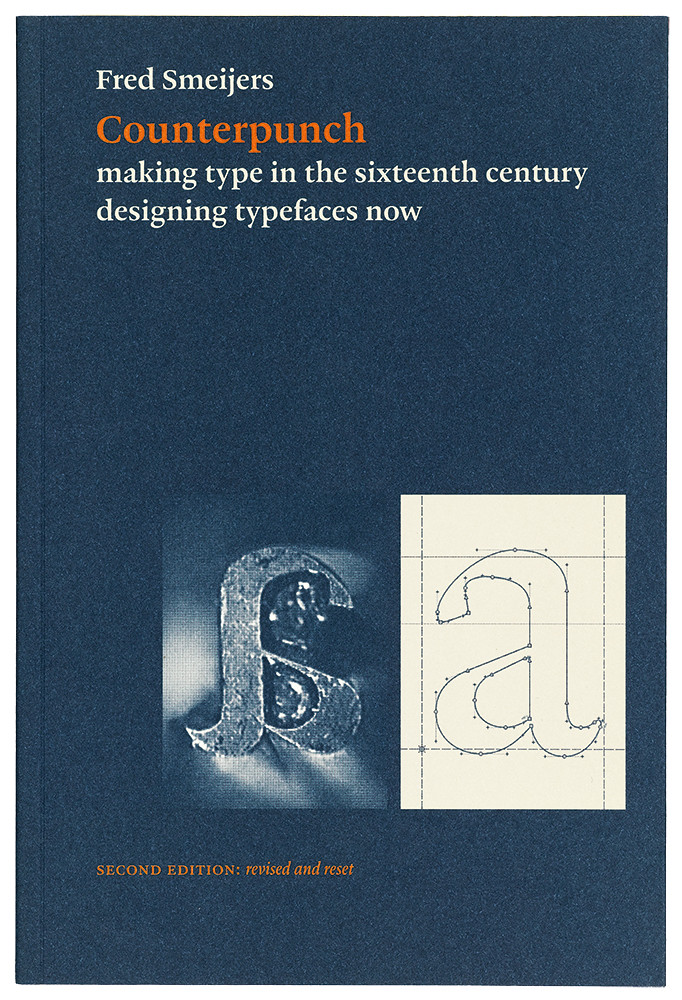 In an attempt to re-assess the foundations of today’s electronic type design, Fred Smeijers went right through the concerns of digital, photographic, even mechanical type production, back to the days of hand-cutting metal punches from which individual pieces of type would be cast. The shape of the metal matrix from which the actual typeface is cast is made by striking the matrix with a metal stick on the end of which the original letter shape has been carved. That stick of metal is the punch, and it is the foundation of all type design before the nineteenth century.

As Smeijers discovered, the most efficient way to start making a punch is to make the centre of the letter first, by striking the uncut punch with a counterpunch. This is the way it was usually done by punch-cutters in the sixteenth century, when the forms of type, as we know it now, were set. The counterpunch creates the hollow space in the middle of most letters. The outer edges, for the most part, are filed away with engraving tools, which is why the centre of an ‘o’ or a ‘u’ is called the "counter Using a counterpunch makes the space inside the letter the starting point for everything else.

The punchcutters of the years 1520–1600, when type moved away from its written roots and evolved into a tool in its own right, were mostly French – at least the best ones were. Smeijers makes a case for including one Flemish punch-cutter in the upper echelon: Hendrik van den Keere, upon whose types Smeijers has based Renard, the digital typeface that he created and used in this book. France in the sixteenth century, and Flanders too, was a hot place to be – sometimes literally. The religious struggles between Catholics and Protestants were bloody, fierce civil wars, and the new craft of printing was enlisted on both sides as the main means of spreading propaganda. For persecuted French Protestant, a big heavy bible was not very useful; whey he needed was a pocket-sized bible that he could snatch up in an instant when the police came knkowcking on his door. Just such a Protestant punchcutter, Pierre Haultin, made the first six-point roman type. He could have made smaller, but nobody could read it comfortably (any more than they could today). Here is another of Smeijers’ points: that the limits of size and design are not in the technology but in the constants of the human eyes that are doing the reading.

With all this, Counterpunch isn’t a manual for a lost art. It’s a lively exploration of where our printed letters come from, both technically and culturally. It digs into a lot of details of how metal type is made, but always for a reason, always to answer questions. That is where Smeijers’s initial idea to write the book came from: Counterpunch grew out of being asked impossible questions by engineers and designers, and trying to give sensible answers. Engineers at Océ, who had to make laser printers that could image the letters in a legible and satisfactory way, questioned Smeijers about why the letters had to look just that way, why the curves and hairlines mattered so much, and the importance of the open spaces around the letters and inside them. And you can almost hear the designers ask: “Why can’t we control that spacing precisely? Why does the curve look like that when it’s printed?”

Fred Smeijers is used to standing in the middle between designers and engineers. He is one of the indispensible people who can explain one way of thinking to practitioners of the other. This is a pretty good stance to take for anyone involved in typography, which falls in the middle of so many other professions.

Starting off with his excursion into the foundations of type design, Smeijers’s book ends up digging into similar details of making digital type today, although not as thoroughly. I would have liked to a discussion of how Smeijers made his own type, especially Quadraat, the FontShop face that looks hand made but reveals, when looked at closely, how its irregularities follow from digital constraints rather than the technical limits of hand-cutting a punch.

A chapter on Van den Keere attempts to explain why one of his big display types, which would have had to be cut in wood rather than metal, looks cruder than his text tpe, even though the text type is dated earlier. [According to Mike Parker, however, there is new evidence that the display face in question dates from an earlier time: the font’s crudeness simply comes from its being a first try.]

In “The unconscious eye” Smeijers produces his most original thinking, pulling together observations and ideas in talking about “linearity” – the continuity of design through different sizes and contexts – and the influence of technique on form. The unconscious eye is what integrates it all, in the act of seeing. Type-makers have to play to the audience of the unconscious eye if their work is to have a long run.

After these chapters, Smeijers waffles into a bit of “what is history good for?” stuff, the kind of generalizing and rhetorical questioning that could been cut. But for most of the book he is concise and to the point. The prose, edited by Kinross, is clean and well phrased. The book is primarily text, but it is well illustrated, with conceptual and explanatory drawings, printed samples, and microphotographs of individual punches. Only occasionally does Smeijers get so deeply into a fine point of technique that even his own drawings don’t make it clear on first reading.

Counterpunch is one of the small series of books issued by Hyphen Press, and as such it is obviously intended to provoke discussion, and to serve as a pragmatic tool for both theory and practice in the graphic design community. Printed in two colours on uncoated paper, sturdily bound in simple, striking design, Counterpunch argues by its own form for its practicality.