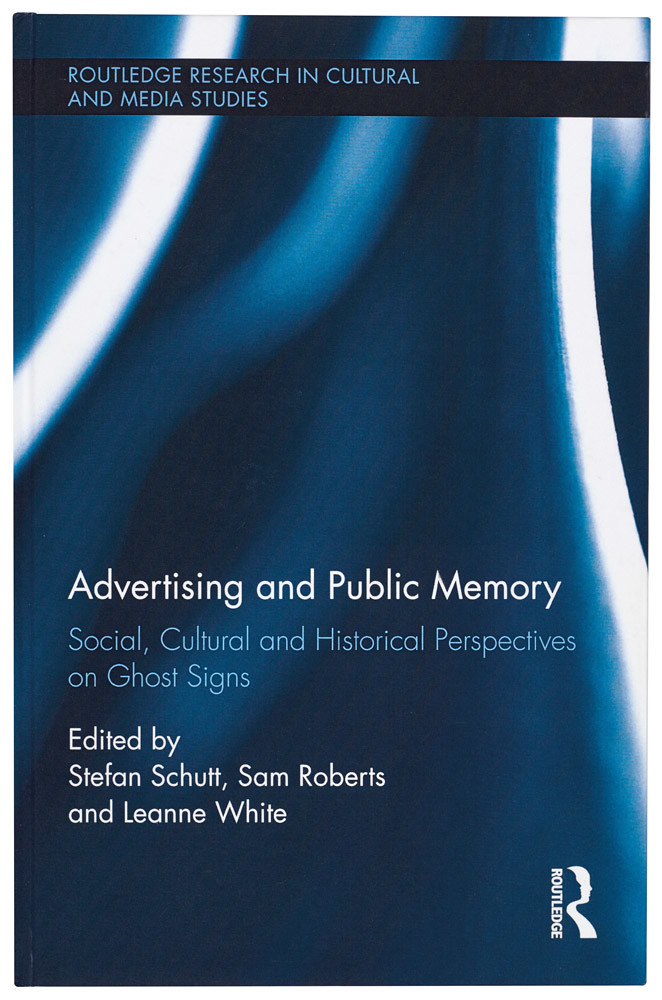 Ghost signs have long been popular as landmarks, historical devices, ornaments and visual research; adding a sort of nonsense texture to the city and being recorded in photobooks, on blogs, websites and walking tours. The first academic collection on the study of ghost signs, Advertising and Public Memory considers the broader context and impact of hand-painted signage, and what its ghosts signify.

The editors, along with a range of authors, work hard to define exactly what ghost signs are – are they defined by their ‘level of fadedness’, advertising of an obsolete product, their form, or their function? The signs are discussed mainly in a sociological context, but the editors do cite Signs: Lettering in the Environment by Phil Baines and Catherine Dixon.

To be seen, ghost signs require ‘slowness’ and mindful observation, behaviours that work in opposition to a contemporary culture that promotes speed and instant gratification. They can be conduits for understanding our need to be anchored in a world of increasing flux, but their roots lie in the Industrial Revolution, which introduced a sharp increase in the pace of supply and distribution, as well as consumption
and, in consequence, advertising.

That enabled advertising to place itself intractably in the architecture of the city, first as hand-painted signage, with an objective of visibility rather than permanence, and then as poster bills and hoardings. As the editors point out in their introduction, the cycle of modernity had torn space away from place, ‘fostering relationships between absent others’ and establishing sort-of shadow geographies enabled and encouraged by globalisation. As the viability of hand-painted signs as advertising dwindled, they became valued because of their association with a somewhat dislocated place or a past.

The editors acknowledge that the tradition of painted advertising referred to is concentrated in Western countries that were formerly centres – or outposts – of early and mid-period capitalism, while elsewhere people were living with very different sets of concerns, and ‘not necessarily attaching the same aesthetic and cultural value to historic signage’.

In the chapter ‘The Ghost in the Sign’, Anthony W. Love writes: ‘The unheralded re-emerging of a familiar artefact might also serve as a reminder that change is inevitable, and individuals must accommodate to the change and adjust their internal representations of the world and their relationships to it.’ Attempts to resuscitate the past and a former sense
of place may, Love suggests, result in signage that is ‘self-consciously designed to promote nostalgia of a more simple kind, superficial and stripped of its disruptive aspects, with no genuine connection to its origins’. Or as the editors ask earlier in the book: ‘When is this
a genuine respect for local history, when is it a marketing ploy, and when
is it nostalgie de la boue, or “memory with the pain taken out’’?’

This push and pull between the inevitability of change and the desire to preserve is discussed from a variety of perspectives throughout Advertising and Public Memory. From Yvette Williams Elliott’s argument in ‘This Peaceful Revolution’ that Walthamstow’s ghost signs for enterprises established as co-operative businesses ‘point to an ethos of working-class organisation and self-help ... and bear witness [to] the political and social cultures of East London’; to the signage of the Chicha aesthetic in Peru – a visual culture that derives from the shanty towns of Lima – where hand-painted promotional signs are placed precariously between buildings and in informal street markets, and preservation is not an issue.

One of the book’s arguments is that due to their physicality, ghost signs refuse to adapt to the rhythms of modern capitalist culture. However, they can contribute to the gentrification process; the appearance and atmosphere of ghost signage is readily adopted by contemporary corporate interests, in the signage for housing developments, cafés or shops, through mimicry or appropriation.

The question of authenticity, and whether ghost signs become an ‘avatar’ after restoration – or rather something that retains the ‘aura’ of what once was – arises in David S. Waller and Helen J. Waller’s chapter ‘Ghost or Avatar?’ They propose that while conservation of signage may not be ‘authentic’, there is value in conserving an aspect of the history of the location, and retaining its aura.

In ‘Ghost Fascias’, Gary Warnaby and Dominic Medway argue that
‘the relevance of history is never evident in the moment in which it occurs’, a point reiterated by Stefan Schutt and Better Letters founder Sam Roberts in ‘A Final Ghost Story’, in which they recount the results of a 2012 survey, concluding that ‘the full meaning and value [of ghost signs] was only realised when people were told stories about them’.

Continuity, both sociological and in the built environment, is a rarity, and as Schutt and Roberts state, ‘The city is a palimpsest with multiple layers. It is open to us to write our own stories, however tenuous and provisional, from its wealth of material.’ From a design perspective, ghost signs are visually interesting, and they provide a sense of history in terms of form, style and method. But they also defy the logic and purpose of signage – to provide clarity and direction, or leading to something that exists. While they remain popular, in society and in advertising, it’s worth considering the question of whether ghost signs represent mere nostalgie de la boue [literally ‘nostalgia for mud’]. Are they temporal anchors, or are we accepting appliqué in place of depth?