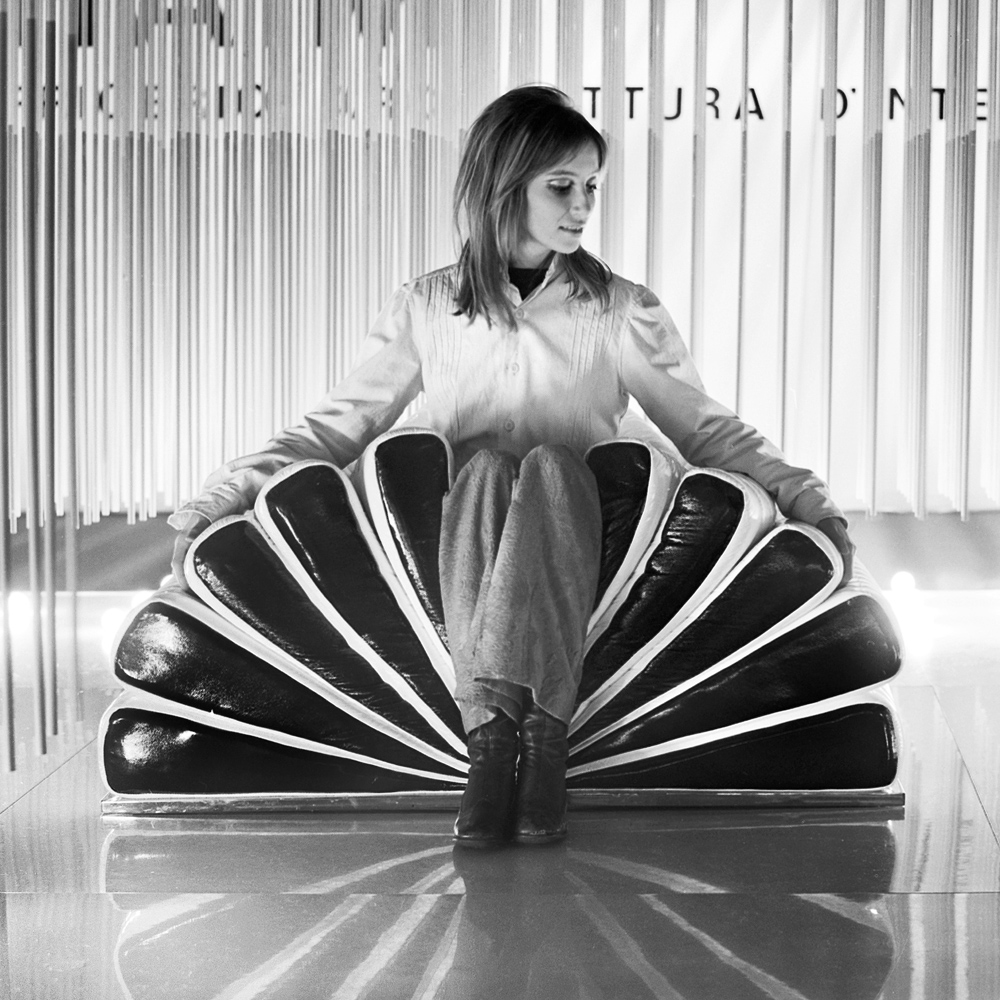 The Estorick Collection is one of London’s smaller galleries, just a short walk from Highbury and Islington (a node of the shiny new London Overground) but not on many tourists’ art tours, writes John L. Walters.

And it has forged a reputation with exhibitions that cut across several forms of visual culture with an Italian connection – film posters, Futurism, Motion (see ‘The mystery of frozen locomotion’ in Eye 75), Munari, Morandi and now the Domus photographer Giorgio Casali.

Casali’s predominantly black and white photographs fill two rooms, and the curators have augmented the two-dimensional display of tactile prints with some of the design objects that Casali shot for Domus, the Italian design / architecture magazine for which he worked for three decades. 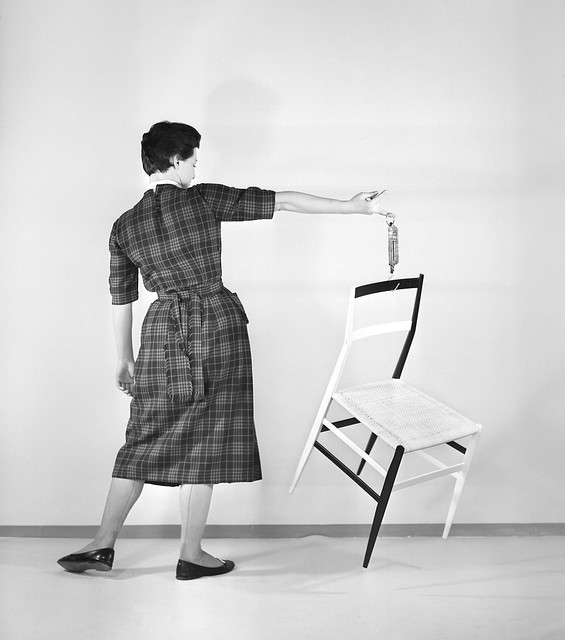 In one room, several Superleggera chairs (designed by Domus founder Gio Ponti) dangle from the ceiling. A giant, free-standing print shows two striking pictures: in one a boy holds a chair with his little finger; in the other a woman dangles a spring scale – which in turn holds the lightweight chair – on her middle finger. Taken in 1952, these images, published in Domus 268 helped to launch Casali’s career and established his relationship with Ponti.

In the other room you can see the extraordinary book-like Libro Chair / Potrona Libra (1970) designed by Gianni Pareschi and Umberto Orsini, and the Arco lamp (1962) designed by Achille and Pier Giacomo Castigliono, which appears in two pictures by Casali that are shown enlarged to prints around two metres in height. 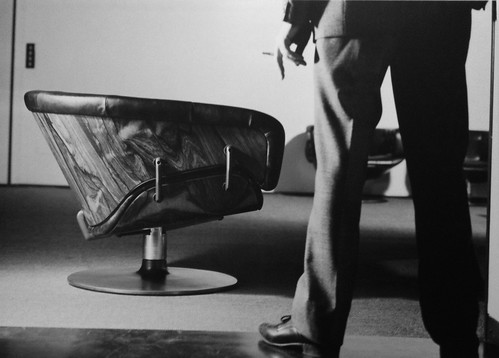 The human figure doesn’t figure much in Casali’s universe, but when it does there’s a hint of humour – the lower half of a powerful Mad Men-like character to the right of Casali’s Lounge Chair (above) and the female model in a man’s shirt, enjoying or possibly trapped between the upholstered ‘pages’ of Libro Chair (top) – it looks like something you’d find in the lair of an Italian villain in a hitherto undiscovered Bond movie. 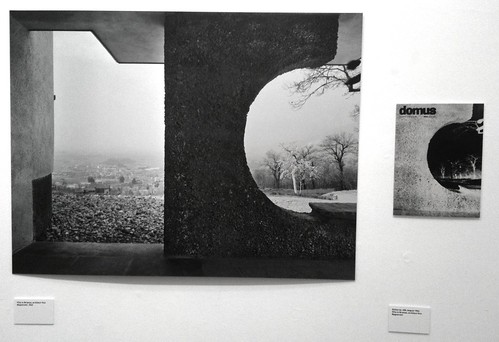 Casali’s technical excellence shines through the prints, whatever their size, and he clearly had a feel for what would work within the context of Domus. At the start of the exhibition there’s a metre-wide B&W print of Vico Magistretti’s Villa in Brianza, the hazy landscape framed by the concrete, pebble-dashed terrace. Alongside it we see the cover of Domus 405, Aug 1963, in which the photo has been cropped to leave a quasi-typographic shape, reproduced in negative to give a bleached, nocturnal atmosphere – a dramatic reinterpretation. 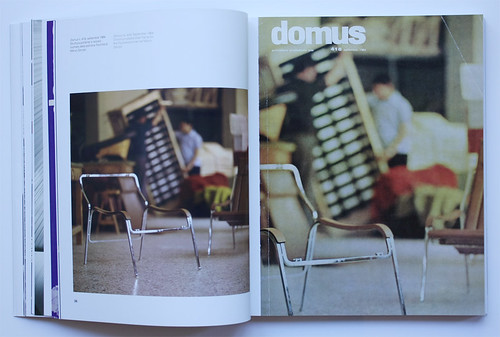 The cover of Domus 278, Jan 1953, shows a tinted view of Marco Zanuso armchairs [‘Senior’ and ‘Lady’] alongside a large print of the monochrome original. However there are only four Domus covers in the exhibition, shown as retouched prints rather than originals. The catalogue, in English and Italian, devotes a whole chapter to Casali’s covers for the magazine, showing his talent for finding heightened drama and abstract form in design and architectural details. (He frequently cropped his own prints.)

Spread from the exhibition catalogue showing the co-cathedral in Taranto. 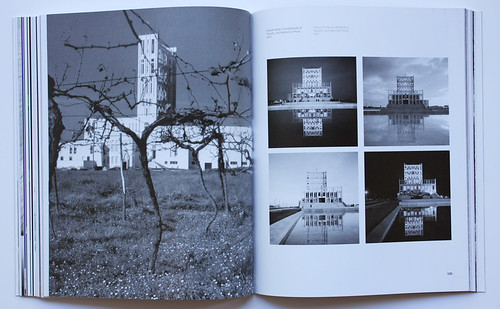 However, neither exhibition nor catalogue presents interior spreads from Domus , so visitors and readers are never shown Casali’s pictures in their editorial context. Casali’s pictures of heroic modernism gave powerful endorsement to architects such as Ponti, whose Torre Pirelli interior looks literally awesome, and whose co-cathedral in Taranto looks as clean and crisp as an architectural model. (Casali also had a talent for architectural models, which he often shot with his own bespoke backgrounds.)

Casali’s photography flatters the dull exterior of Angelo Magiarotti’s Snaidero offices in Majano del Friuli with a visual comparison to the Doge’s Palace in Venice.

In the catalogue, a self-deprecating Casali quotation recalls that: ‘an Indian architect … accused me of being a fraud because, when looking at the same works in real life, he had found them less pleasing than the photographs.’

In some cases, Casali’s photos have outlasted the design and architecture that supported his photographic practice. Yet his vision of a stylish, spacious and intense Modernism, punctuated by espressos and smart clothes, is one to which many still aspire. 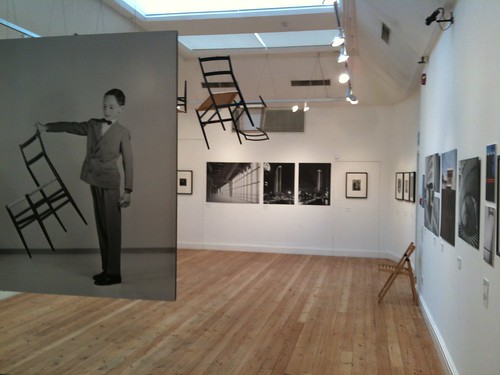 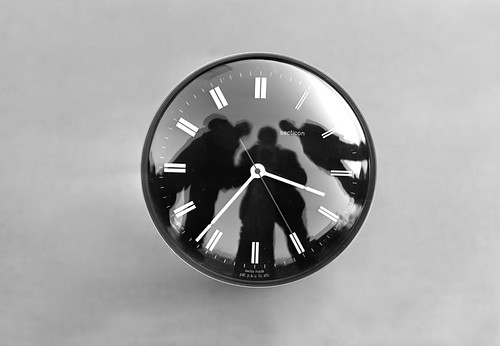