From scraping to chirping 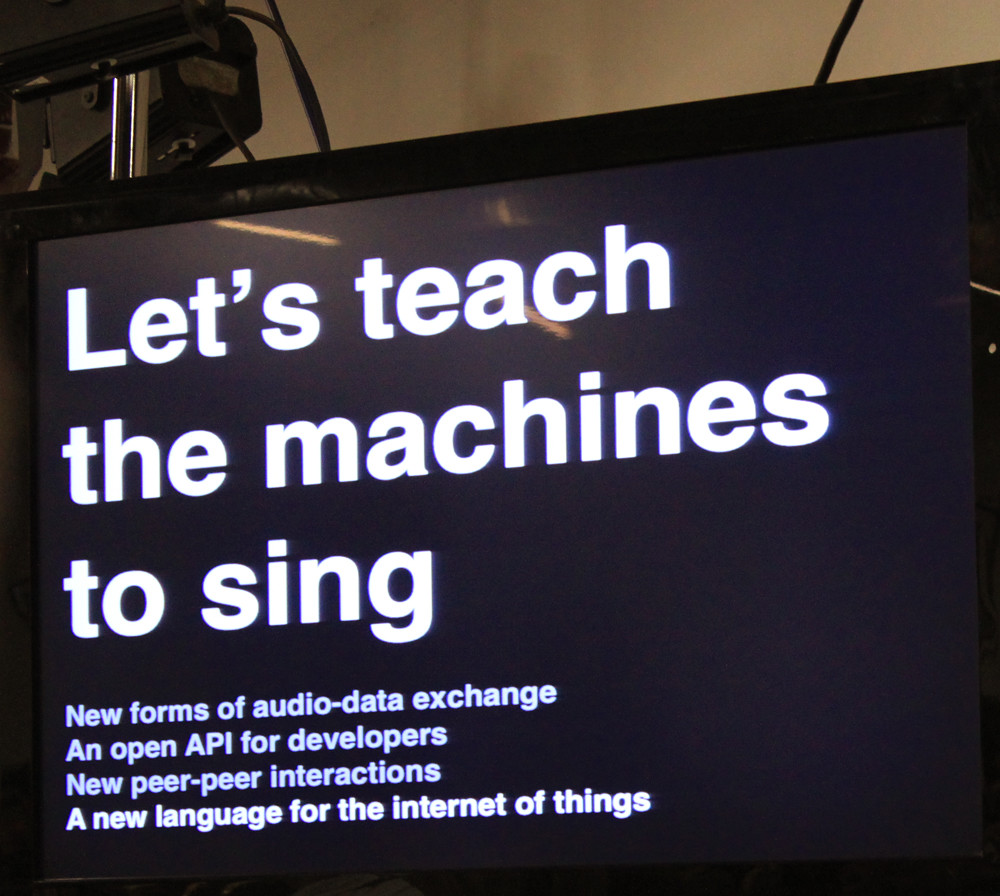 The sold-out ‘Future Everything’ conference was part of a large and wide-ranging programme of events, exhibitions and workshops spread across several Manchester venues, including the ‘Future Everybody’ exhibition, which runs until 12 June 2012.

Here, Pam Bowman and Matt Edgar file their report from the two-day event. 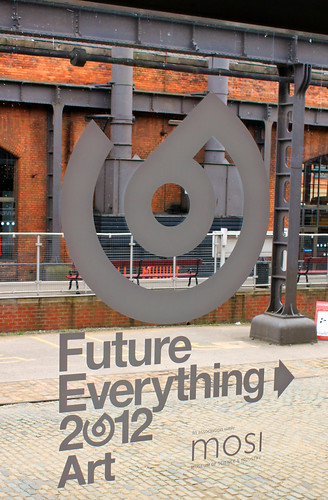 This year’s conference aimed to look at ‘the next lurch into the unknown brought about by a new participatory culture that is changing our world.’ There were a variety of presentations, participatory workshops and panel discussions in the Museum Of Science and Industry, where speakers presented a host of ideas, tools, problems and opportunities for discussion.

One of the tools presented came from Animal Systems, the Chirp. This tool, which will be released as an app, transmits data via sound to enable devices to talk to each other and people to exchange data.

The chirp is created by one device and ‘heard’ by another nearby. It opens up all sorts of possibilities for local game play, encrypting data into a piece of music, brand development, accessibility and simple communication. There are issues of interference but this communication can take place without internet access. Chirps can send links or other simple data and the most interesting applications have probably not even been thought of yet. The makers are open to collaboration and suggestion.

The idea was inspired by birdsong but the developers were keen to dismiss the possible interpretation that it is a romantic idea but rather that it has intrinsic charm. ‘The wisdom of nature, but not in a fluffy way.’

‘The use of sound is the media but also the signal that something has taken place. Its also evidence that it is working – data is being transferred.’ 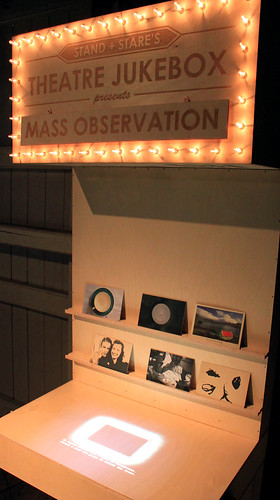 Stand and Stare’s Theatre Jukebox is a small and fairly mobile performance space, the content of which is currently a project born out of the Mass Observation Archive, held at the University of Sussex Special Collection in Brighton. Brother and sister team, Barney and Lucy Hayward spent time researching the archive to find a few stories to interpret. With such a rich collection of material to work with, the scale of the project feels quite limited but it is a popular piece in the ‘Future Everybody’ exhibition. 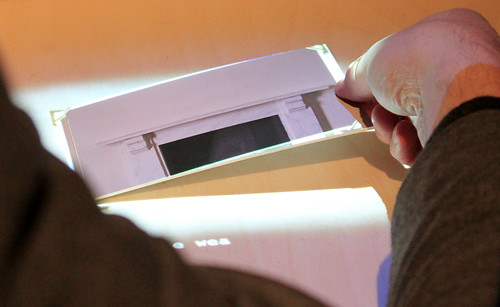 Each Jukebox contains six cards that are recognised by their RFID tags and allows the Jukebox to play sound and a projected animation unique to that card. There is something immediate and seductive about the way the projection interacts with the printed card but the temptation is to change the cards mid way through and attempt to create your own, unintended narrative.

César A. Hidalgo (below) was a lively speaker, full of enthusiasm and a desire to impart a real understanding of the material he is presenting – the ‘Global Market Space’ (you can also see his talk from TEDxBoston online.)

This is not just pretty data but data with a purpose, creating a model that can be used to predict economic growth, decline and opportunity for a country.

Juha van’t Zelfde heads up Non-fiction http://non-fiction.nl/ which ‘is an Amsterdam based and internationally operating innovation agency working at the intersection of the arts, heritage, media and architecture.’ He is also co-founder of VURB which ‘is a European framework for policy and design research concerning urban computational systems. The VURB foundation, based in Amsterdam, provides direction and resources to a ‘portfolio of projects investigating how our cultures might come to use networked digital resources to change the way we understand, build, and inhabit cities.’ 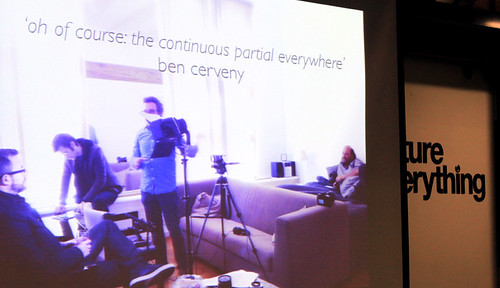 His talk described cities as entities other than the physical space, but as the world we carry around us. An example he gave was that we no longer go on holiday and send back postcards that arrive after we do but take our friends and family with us and remain in constant contact through various social media channels. We now have systems for communication that ‘are a thousand times stronger than we had when we went to the moon.’ Van’t Zelfde came back several times to Shakespeare’s rhetorical question: ‘What is the city but its people?’ 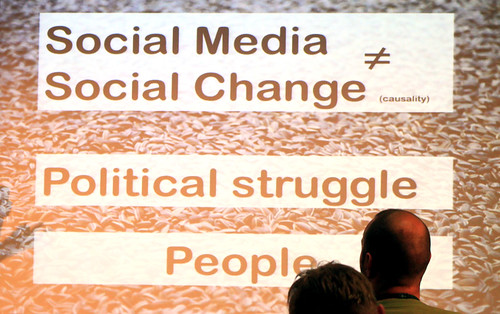 The following morning’s keynote speaker was Icelandic MP and hacktivist Birgitta Jónsdóttir. She proclaims that the system has failed us and that the 21st century must become the century of the ‘common people’. A former key member of Wikileaks, Jónsdóttir advocates active participation by the public in shaping society through crowd sourcing, co-creation and direct democracy.

‘Wikileaks was an icebreaker that has opened up wider discussions about how direct democracy might work’. The Icelandic International Modern Media Initiative (Immi) is a movement that aims to establish a freedom of information and expression and emphasises the importance of participatory tools and social media to help facilitate a better kind of democracy, one that is shaped and owned by the people. The talk set the tone for a day where the social and political were strong recurrent themes.

Workshops and breakout sessions ran alongside the talks and keynotes, with the ScraperWiki workshop demonstrating how to ‘scrape’ data from the web. Delegates suggested that ‘Drowning in Data’ could have been an alternative title for this year’s conference. In this session Chris Blower demonstrated that an interesting question allied to a few smart lines of code could yield fascinating results that could be exploited by journalists, designers and artists alike. It’s an interesting tool that could help make sense of complex and often hidden layers of information and data within the web. https://scraperwiki.com/

Lancaster University’s Professor Jon Whittle introduced The Catalyst Programme, which explores future (citizen) tools for social change. He introduced Juliana Rotich who told us that ‘geeks want to save the world, too’ and showed an example of how one such participatory tool, the open source online platform Ushahidi (‘witness’) is being used in the field. The original idea was to put a communication tool into the hands of the crowd so that they could verify events and consequently remove the ‘deniability factor’ of, in the first instance, the Kenyan post-election fallout in 2008. A crowd-mediated, bottom-up map is created to document hot spots of violence that create a visual picture that can instigate action. A vital tool for NGO’s and agencies trying to establish a clear picture of what is needed in times of crisis. Since then the tool has been used during the Haiti and Christchurch earthquakes. http://ushahidi.com/

MIT Senseable City Lab guru Carlo Ratti (below) brought this years conference proceedings to a close with his keynote on Future Cities. Ratti explores the space where concrete and silicon meet. 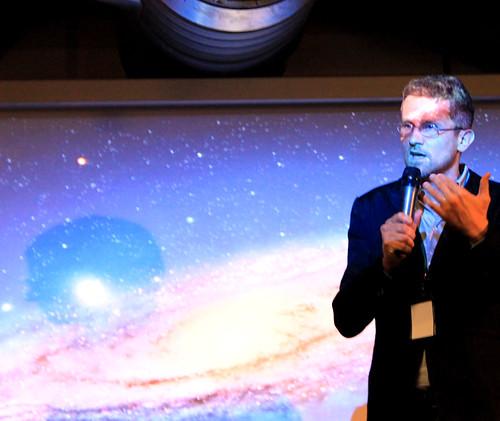 Our cities are becoming smarter and more responsive as they become embedded with smart materials, and electronics, a sensor – actuator model, building in ‘back-talk’, where denizens are walking sensors transmitting and receiving open data in real-time. One such example; ‘Trash Track’, an MIT lab project that attached GPS sensors to waste and then mapped the journey of that waste creating a diagnostic tool that maps the ‘removal chain’. Its intent is to ‘promote thinking about resource management and promote behavioural change through pervasive technologies’.

The interdisciplinary nature of the work is most clearly seen in the ‘Copenhagen Wheel’ project where designers, architects, computer scientists and engineers came together to create a smart bicycle wheel for a more sustainable transportation system. The wheel harnesses the energy of the cyclist and then stores it for when a boost is needed. It’s smart in other ways too and includes a sensor kit that monitors CO, NOx, noise (dB), humidity and temperature linked by Bluetooth to your smartphone. He cited Christopher Alexander’s early research on collaboration as a way forward. He concluded with an observation that the top research papers are now often multi-authored where ten years ago they would have been single authors, accompanied by two slides to emphasise the point. 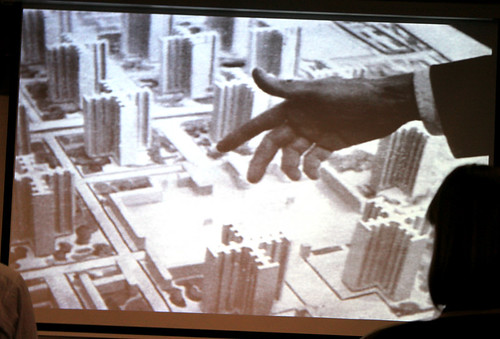 First, a Le Corbusier model of Paris with the architect’s pointing hand entering frame top right like Michelangelo’s ‘Creation of Adam’ (above); next a composite head and shoulder image of a multitude of faces that have worked together across many disciplines on projects at the Senseable City Lab (below). 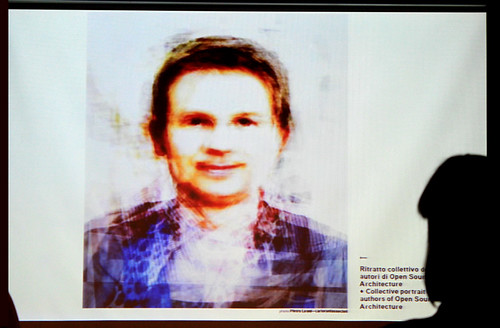 This was a fitting finale to two days in which the ‘Future Everything’ conference themes of participatory culture and interdisciplinary practice allied to smart tools revealed exciting possibilities for the future. Everything.

17 > 18 May 2012
Future Everything Conference, Museum of Science and Industry, Manchester
Details and further information at Futureeverything.org.