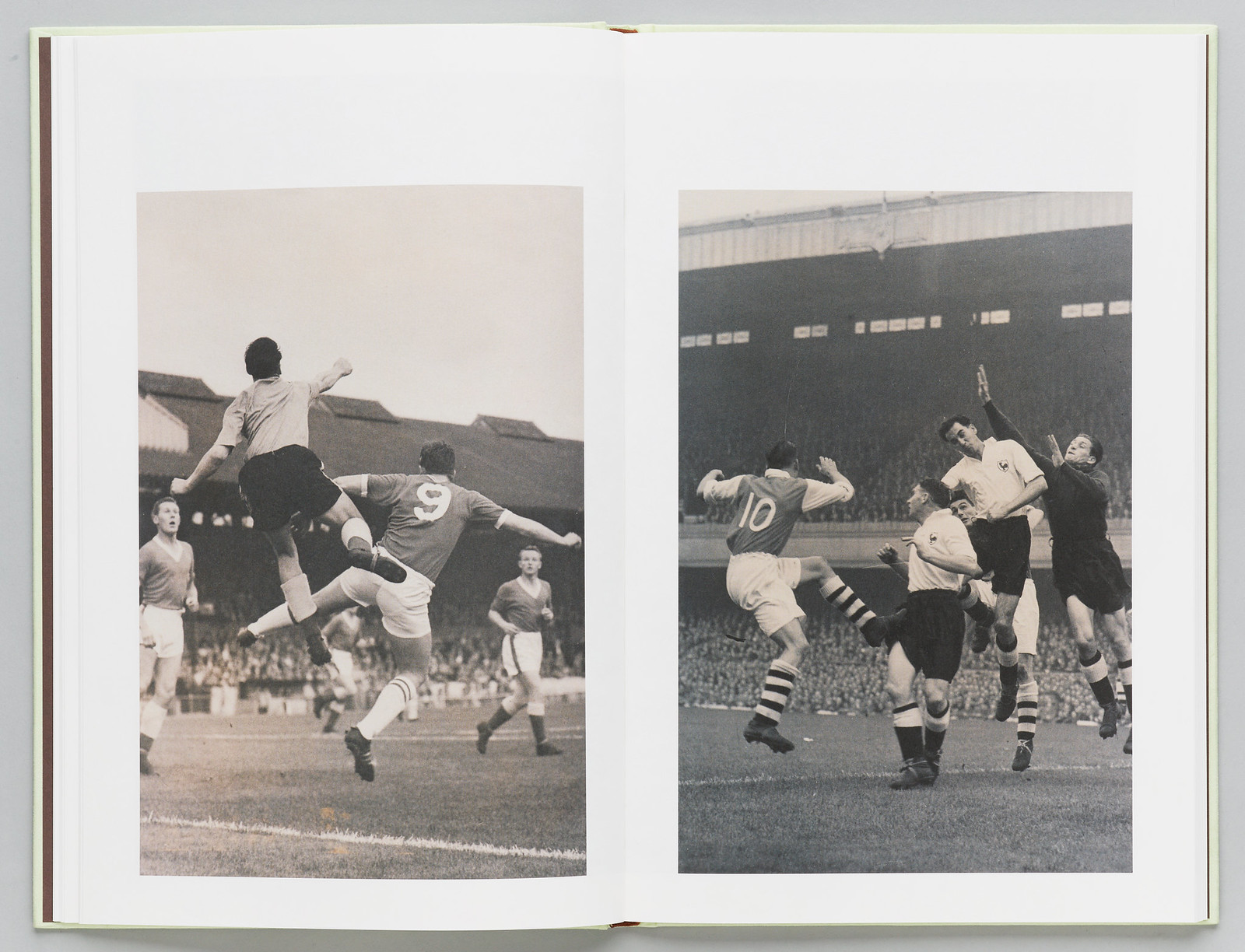 Every photograph in this wordless book has frozen a moment of combat in a random assortment of football matches. ‘Performers’ – as Kessels calls them – stretch and strain together to cut an array of gymnastic vectors all backdropped mistily by stacked sheds packed with blurry heads. The pictures appear to have been taken in the 1940s and 50s – shorts are long and billowing, footwear is hiking boots, socks appear to have folded newspapers stuffed down them to protect shins, and goalkeepers sport thick woollen rollneck jumpers. 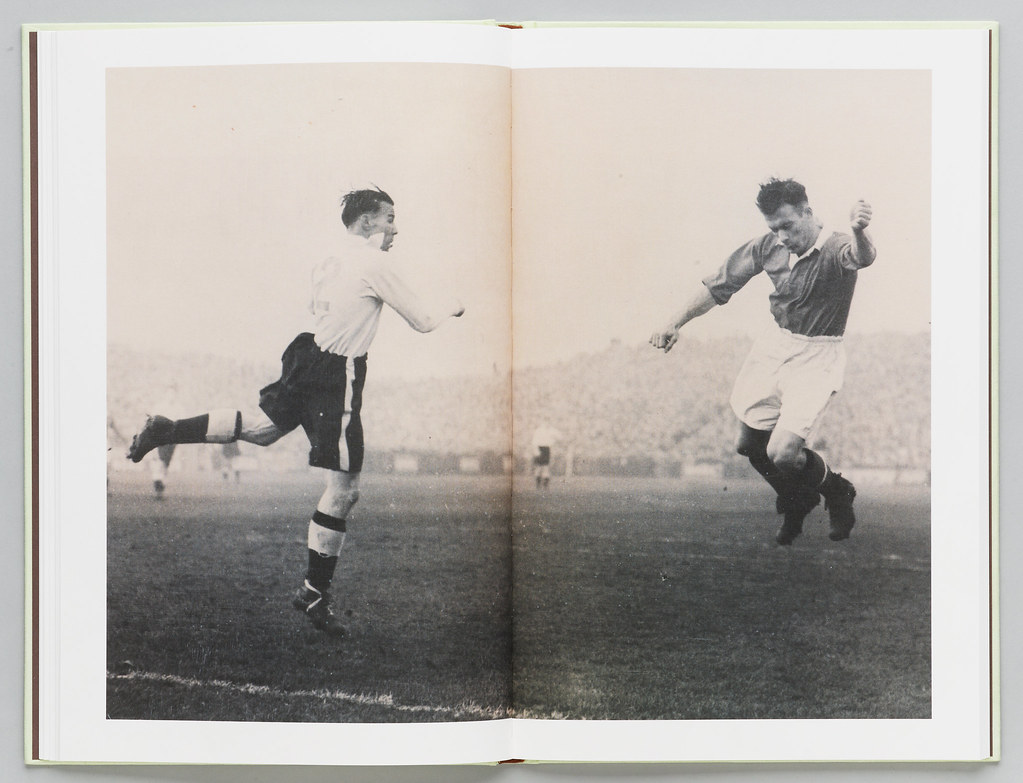 This is the ubiquitous vernacular of the goalmouth action photo taken by an always-recumbent huddle of press photographers stationed perilously close to the goal line. Shot from ground level, these photos thrust the viewer into the mêlée. Sporting press archives are piled to the rafters with them, yet Kessels’ sensitively scaled and paced, captionless book succeeds in helping readers to see beyond the face value of a game in which, in Britain at least, brawn was mightier than brain.

Muddy Dance captures the mud, blood and thunder of a sport played to a physically punishing extent, but as photographic life studies go – and this qualifies as one – the book is surprisingly comic. And yet at the same time it is also tragic. A visible tightness across the shoulders, closed or squinting eyes, blown-out cheeks – this is the body squirming in anticipation of pain. Through this visual vocabulary of contortions Muddy Dance reveals a vulnerability in the game’s performers of this era usually only associated with the virtually non-contact version of the game played today. 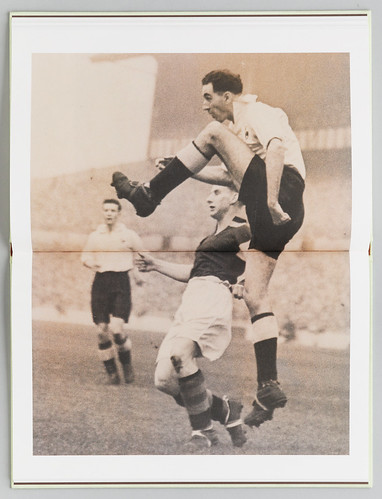 Developments in medical research mean we now look back on this era with knowledge of the physical cost of playing the game this way. We know that lives have been affected by early-onset dementia for a significant number of ex-players due to heading heavy unwaterproofed footballs. Photographs of the sport played during this time can carry an aura of tragedy. This opens these images up for aesthetic contemplation, which is helped by the book’s title itself, Muddy Dance, and the fact that a football is absent from every single print reproduced in the book. Without the fulcrum about which turns each throng of wheeling, flying, clawing, and flinching bodies, I find myself looking at the athletic tangles less like a football fan and more like a designer. 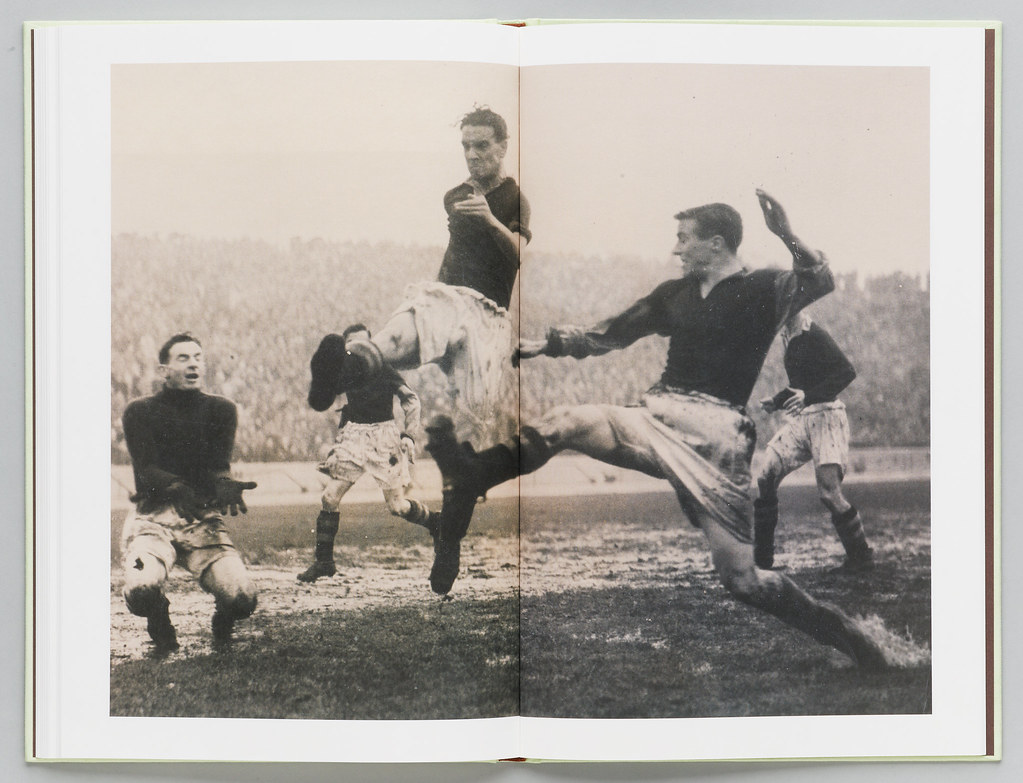 A goalkeeper’s jump traces a perfect arc. The eyes of three players triangulate a point in the air that a ’keeper’s hand reaches out to. A left leg is swung high, knee reaching chin can-can style. Elbow bent, palms horizontal, attacker and defender mirror-pivot away from each other as if line-dancing. A goalkeeper appears to pray at the outstretched boot of an attacker who holds an exaggerated striding pose. With torso titled backwards, forearm diagonal across the chest, left leg in the air striding forward, an attacker stomps the penalty area as if Madness’s ‘One Step Beyond’ were blaring from the stadium PA. Stretching every sinew, two wingers stride across the frame like kick-dancing Tartars. In an embrace of unborn twins, two players are captured airborne – a tender still from what in raucous motion could be the impact of a body slam in a mosh pit.

An attacker stomps the penalty area as if Madness’s ‘One Step Beyond’ were blaring from the stadium PA. 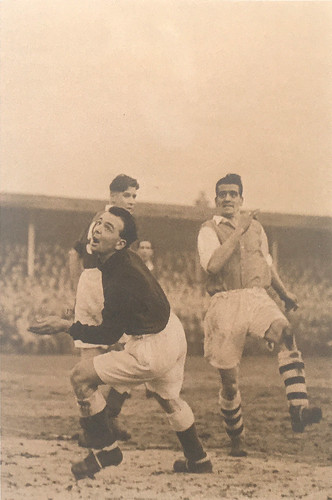 I suspect that all the prints Kessels has found and sequenced into this fine volume are of prints that were used in ‘spot-the-ball’ competitions run by British newspapers. This is a contest – once very popular – in which readers win prizes for guessing the exact position of the ball by marking an action picture of a football match from which the ball has been ‘touched out’. 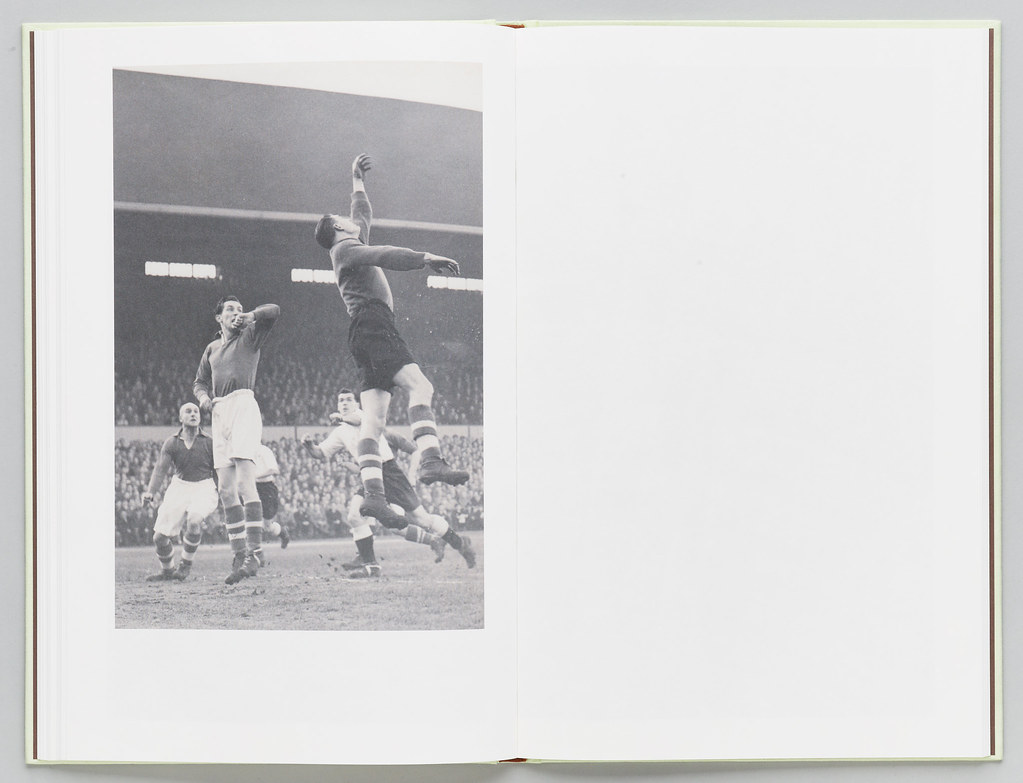 Kessels says that the photographs are from a news archive he acquired of English soccer games from 1949-1952. ‘With my edit for the Muddy Dance book,’ he says, ‘I concentrated on the choreography present in the photographs.’

Muddy Dance is a beautiful and sparingly assembled reframing of the football action photo that is at once comic and poignant.

Cover of Muddy Dance by Erik Kessels. Stickers proclaim it to be both ‘The Football book for Art Lovers’ and The Artbook for Football Fans.’ 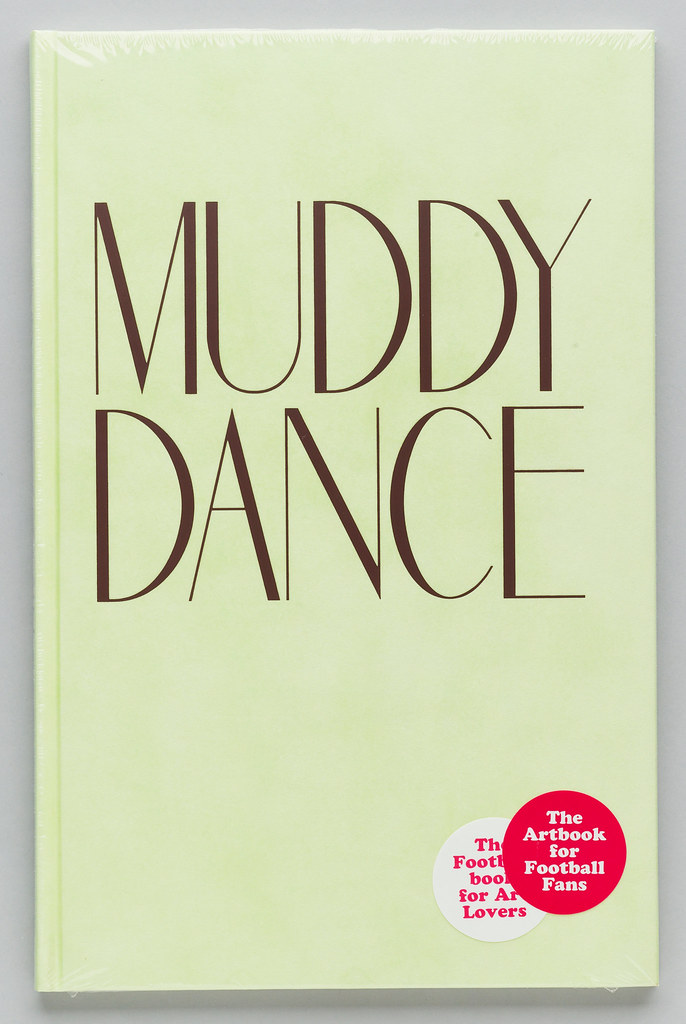 Other Articles By Nick Bell

Saturday afternoon fever
An end to the curatocracy?