This exquisitely designed tattoo magazine is a heady mix of fetishism, art, philosophy and popular culture 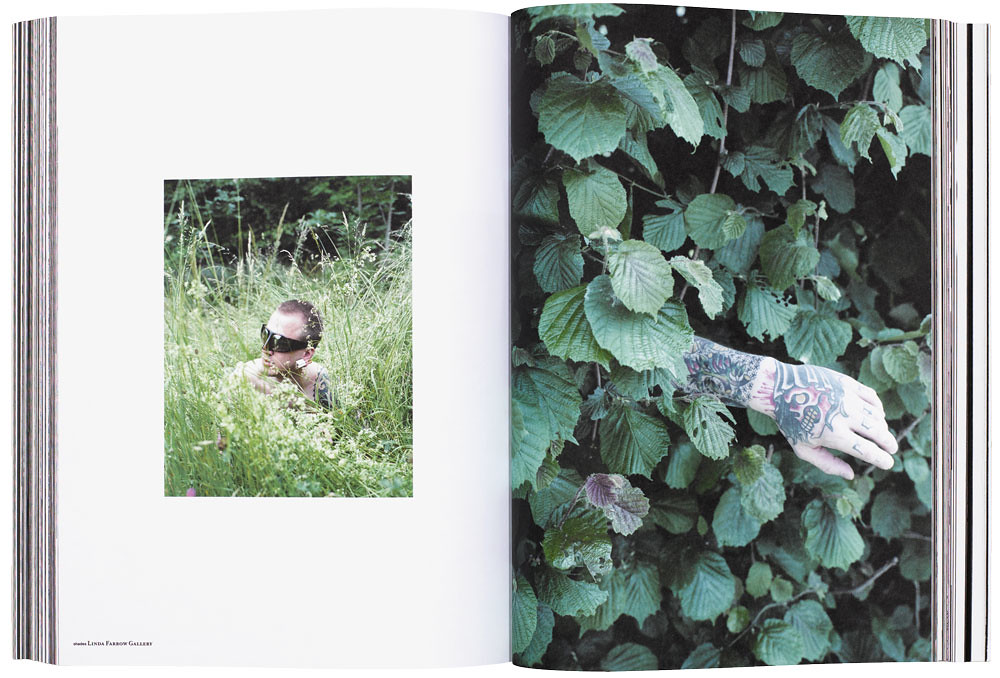 Drawing, said John Ruskin, was nothing but ‘dirtying the paper delicately’. Tattoos can be pretty delicate, too, but, as our parents warn us when we’re nearing that impressionable age, there is something – if not dirty – then dangerous and transgressive about them none the less.

Yet the latest edition of Sang Bleu, is a beautifully art-directed curiosity, a magazine that celebrates tattoos, alongside fetishism, fashion, philosophy and culture. Editor-in-chief and creative director Maxime Buechi regards it as a pure essay in the form, a self-financed labour of love and a statement about things he likes.

Buechi studied psychology at the University of Lausanne and visual communication at ECAL, later working for Norm (see Eye 70) in Zurich, Self Service magazine in Paris and for Arena Homme+ and designers North in London, where lived when he launched the first Sang Bleu in 2006.

Now back in Lausanne, Buechi is also the founder, with type designer Ian Party, of the B&P Typefoundry, whose typefaces are featured throughout the mag. The article ‘Vieille France’ announces: ‘Sang Bleu is a typographical project, reader,’ accompanied by a specimen of seven fonts: Sang Bleu BP, Romaine BP, New Fournier BP and so on. B&P’s other products include LaPolice BP, Adam BP and typefaces for Esquire (UK).

The magazine’s many photo stories range between a slick, fetishy eroticism, with leather-bra’d Sapphists tussling in nightclub lavatories, to a more detached, documentary or even anthropological approach. Where clothes are worn, which is by no means everywhere, their maker is cited at the bottom of the page in a nod to the conventions of the fashion press. In between pics, the luminaries of the tattoo scene are questioned about their professional development and life philosophy. The list of suppliers at the back includes clothes shops and tattoo parlours. 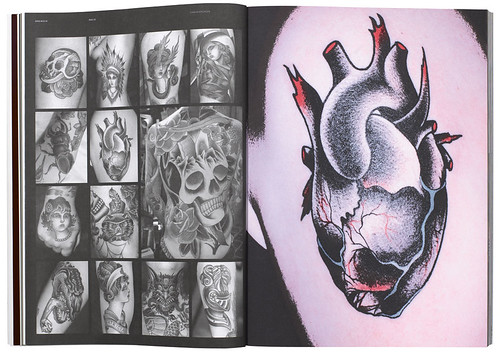 Elsewhere, the writing is more essayistic, varying widely in tone, scope and quality: a piece on Kylie Minogue’s mouth and Damien Hirst’s diamond skull; one on the Faust legend; and several on ‘tattoo theory’, a mixture of existentialism and mild S&M. Layouts are studiedly, exquisitely punky.

Buechi says that his magazine is ‘not an end, it’s a means’. Sang Bleu is already diversifying into exhibitions, club nights and so on. ‘We use tattooing and other underground cultures to talk about other things,’ he explains.

One thing Sang Bleu eloquently communicates is the fact that tattooing signals an initiation into a tribe, an order of adepts, a sort of aristocracy (whence, presumably, one sense of the title). The mark signifies an act of commitment, even though it is easier to get tattoos removed now than it used to be.

The success of the Russian Criminal Tattoo Encyclopaedia (see Eye 53) series derives in part from the sheer, scurrilous inventiveness of the imagery. Here was a subculture which was all about encryption and concealment, but which, also had that real, die-hard, death-or-glory nihilism which has pretty much vanished from a happy-clappy and more or less infantilised youth culture.

In this, even the more innocent and narratively transparent tattoos collected in Sang Bleu speak of a passion and dedication, a strange glory-in-abjection, which straight consumerism has never quite managed to tap. It’s this commitment, this potential abjection, that makes tattoo culture something other than ‘fetishistic’, in the rather glib sense that stockings and corsets are fetishistic, though some tattooed people clearly have a particular objectivity about their bodies, which lends a peculiar intensity to this hefty (500-plus pages of mixed stock) double issue.